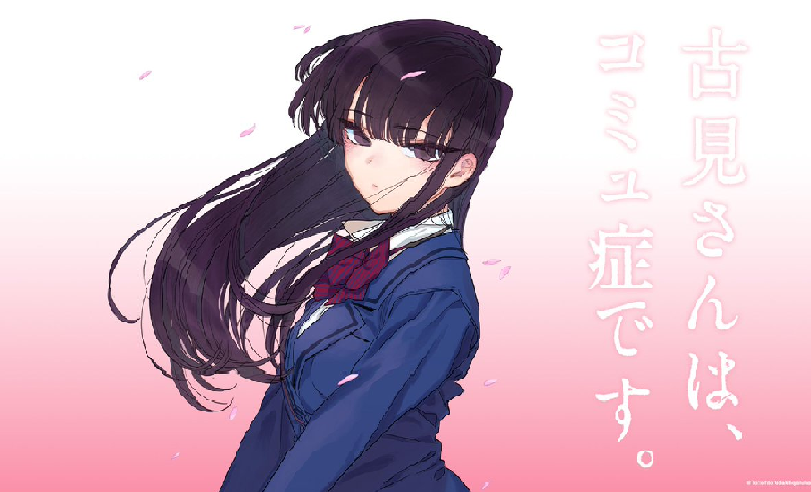 Komi-San Can’t Communicate tells the story of 15-year old Shouko Komi (Komi-San for short), who attends Itan Private High School. She’s quiet, smart, and has amazing good looks. Unfortunately, Komi suffers from social anxiety, rendering her unable to properly communicate with people. This, in turn, causes her classmates to view her as a sort of unapproachable goddess. However, Komi’s life changes when she meets fellow classmate Hitohito Tadano.

Tadano, an average-looking student, is able to see past her refined beauty and recognizes it for what it truly is. After having a discussion with her via chalkboard in an empty classroom, Tadano vows to help Komi make 100 friends.

Tomohito Oda wrote and illustrated the Komi-San Can’t Communicate manga. Before its serialization, it started off as a one-shot chapter in Shogakukan Weekly Shōnen Sunday on September 16th, 2015. The manga began its official start on May 18th, 2016. As of February 18th, 2021, the official manga has 21 volumes in production.

In November 2018, Viz Media, an American-manga production company, announced that they officially licensed the manga to release in America. June 11th, 2019 marked the official release for the American serialization.

In a 2020 Poll hosted by AnimeJapan, the manga series won first place for Most Wanted Anime Adaptation. On May 11th, 2021, it was announced that the series will officially be receiving an anime this October. OLM (Oriental Light Magic) will be in charge of production.

OLM is a Japanese Animation Studio stationed in Tokyo, Japan that were responsible for many series. For instance, such works include Pokémon, Yokai Watch, and Restaurant To Another World.

With excitement for the upcoming release, many followers of the series can’t wait to see how the adaptation will succeed.

Have an opinion on the upcoming anime? Come and let your voice be by stopping on by our Facebook Page, and saying hello! As always, Stay Geeky!

We all love our anime heroes and their stubborn optimism in the face of overwhelming darkness. But what do we love more? The villains!...