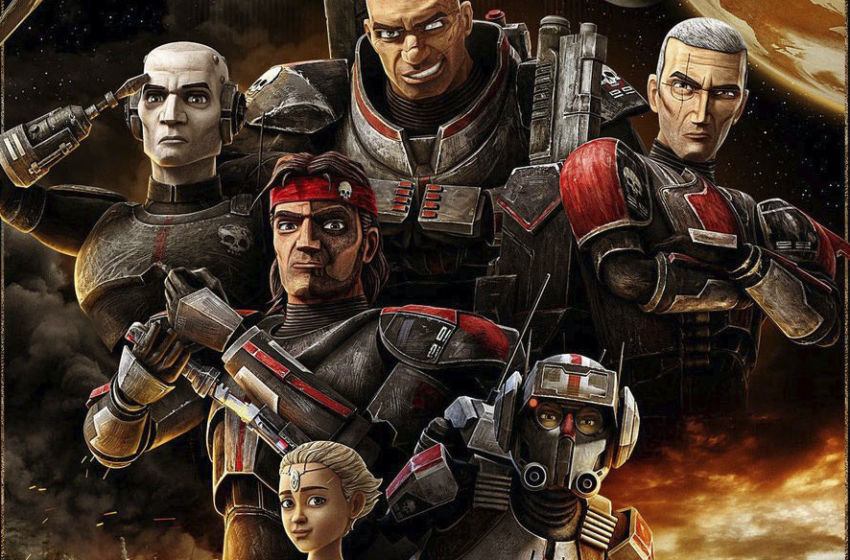 May 4th was Star Wars day, but here at GNN we keep Star Wars day going all month long! May 4th was also the day that Disney finally debuted the long anticipated newest Star Wars animated series, The Bad Batch (Yeah, I misread it the first time too). The sequel/spin-off to The Clone Wars, The Bad Batch centers on Clone Force 99, made up of “defective” clones with mutations that are actually favorable. As of writing we have had two episodes drop so far (every Friday) in addition to the premiere 70 minute episode. What are our thoughts on the show so far? Generally positive. Let’s take a look at the premiere episode though with a scene-by-scene breakdown of what is being established.

The episode starts off with the “Clone Wars” title card burning away to reveal the Bad Batch logo, setting the tone for the show. We also get a recap of what is going on at the time through the traditional Clone Wars narrator. Right off the bat the episode starts with a battle on Kaller where the Republic forces led by Jedi Master Depa Billaba and her apprentice, Caleb Dume (Future Jedi  Kanan Jarrus). I love how they throw Kanan in here, creating an anchor point between Clone Wars and Rebels here. It makes for great fan service that adds to the overall mythos.

They are pinned down by a droid battalion right when Clone Force 99 arrives and completely mops up the entire battalion in an impressive and unorthodox way.

Soon after the skirmish is over we see a clone trooper receive the order from Chancellor Palpatine to “execute Order 66” and immediately Billaba is on the defensive. Caleb sees his master under attack and listens to her order to run away and offscreen we hear her dying scream. The bad batch are confused and try to retrieve Caleb but Caleb fears them, and understandably so, after Crosshairs (the team’s sniper) tries to kill him. Hunter, the group’s leader, tries to reason with Caleb but loses him past a waterfall.

The squad returns to Kamino looking for answers and witness Palpatine’s famous speech from the end of Revenge of the Sith, the Republic formally becomes the Empire. Another great moment where we see the connection between the show and the films.

A throw away scene where the Bad Batch get into a food fight with regular clones troopers. Apparently the squad are not beloved by the rest of the clone army.

Tech, the squad’s technology specialist, figures out that their inhibitor chips that make all the other clones follow orders without question is not functioning with them. Tarkin arrives to Kamino with the intention of re-evaluating whether the Empire will require Clone troopers still or will conscription soldiers serve better.

We always heard about clones being phased out in later canon, so it’s neat getting these conversations played out for us, as the empire considers clone troopers to be very expensive now.

Clone Force 99 is subjected to a live-fire exercise against droids and survives by using their signature tactics and unorthodox approach to battle. We got this earlier in the episode but I like how we get a better scene of them each using their specialties in combat, further showing us how capable these guys are.

Tarkin dispatches them on a secret mission to eliminate “insurgents” at a camp. The squad arrives expecting to deal with Separatists forces / droids but are instead met with Saw Guerrera’s pro-republic forces and refugees. Crosshairs is the only member of the squad who wants to actually eliminate them (“A good soldier follows orders”) as the rest of the squad is sympathetic to their plight and begins to wonder who the good guys are. With their mission forfeited the squad thinks hard about what to do. Fearing for the life of the young female clone, Omega, the squad returns to Kamino for a daring mission to rescue her.

Despite now technically a villain, Crosshair is the coolest looking of the Bad Batch. Image from Nerd Reactor.

Unfortunately they find themselves ambushed and imprisoned by a group of clones and Tarkin, who had suspected their treason and had followed their mission with a secret probe droid. Crosshairs gets pulled aside and subjected to some advanced hypnotherapy involving his inhibitor chip. Meanwhile the rest of the squad breaks out and tries to escape with Omega. Sadly they have their escape cut off by a squad of clone troopers, now lead by Crosshairs himself. After a brief skirmish, and with some hacking help from the Kaminoans, the Bad Batch make their escape to lightspeed leaving behind a dejected Crosshair on Kamino.

The 70 minute long start to the series was a fantastic move. It gave us plenty of time to learn about Clone Force 99 as well as their skills, personality quirks, and where their moral compass leads them. The cameos we got of Kanan, Saw, and Tarkin further help anchor the show into the greater overall Star Wars universe. Admittedly I am not a fan of Omega, I feel like her inclusion will needlessly complicate things in the future. Omega’s presence in the show is like when you are together with your boys (or girls) and you’re about to go on an awesome road trip, and then your mom calls out to you “Don’t forget to take your sister” and your enthusiasm drops a bit. That’s what Omega does to me. Will she be a great character? Only time will tell.

We haven’t really had a look at the early Galactic Empire immediately after the Republic. The closest we have before now was with Rebels and even then that was years after the Republic. Seeing the transition of government play out in front of us, in addition to the issue of the clone troopers being cost-inefficient, makes for ripe unexplored territory for the franchise. I give the premiere episode a 9/10 and I can’t wait to see where the show ultimately will end up.

How do you feel about the show so far? Be sure to comment your thoughts and takes down below. Enjoy our content? Be sure to subscribe to our news page, GeekNewsNow.net and check out our social pages. Our Facebook page is here, our Twitter page with great memes is here, and our YouTube channel is here. Keep it here for all the latest on geeky news.