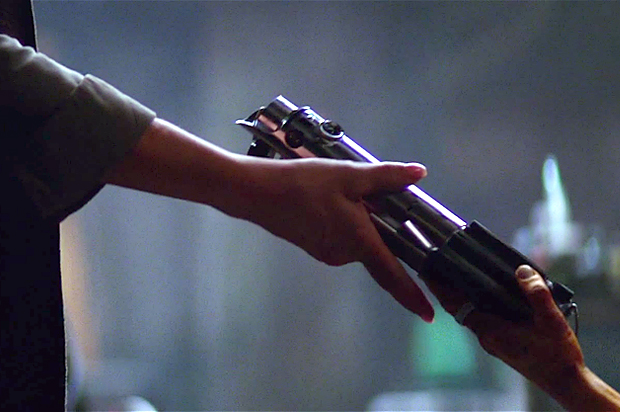 You know you want to see her light this sucker up, and take on the bad guys!

Disney has teased for a new, retractable lightsaber to be added to their collection. They had released a short video that showed off this new saber in April, and it looks incredible. The new lightsaber will look like the most realistic retractable blade to come out yet.

The new lightsaber is rumored to have similar hilts to the replica ones sold at the Disney parks and online. It will not require the prop blade that the lightsaber hilts do now, and the blade will not only extend from the hilt, but it will light up, as well.

How Does it Work?

Judging the video that Disney posted, it looks like this blade seamlessly glides out of the hilt and lights up nice and bright. The quality of these lightsabers is unknown for now, but it seems like they will be high-end.

The hilt looks very similar to what we’ve seen with the deluxe lightsabers from the Galaxy’s Edge. It appears that it will be a bit larger due to the retractable blade, but overall it seems like it will be as accurate as possible.

Thanks to the power of the internet, we have, sort of, an idea of how this new lightsaber will work. Disney was tight with releasing details on the product, but through their patent filings, the internet has pieced together that the blade will work similarly to a motorized tape measure. The modified tape measure design will include a retractable sheet of plastic with LED lights.

When and Where to Buy

Now, the question we all want to know; when and how to get them? The video that showcases this newly designed lightsaber is for the Star Wars: Galactic Starcruiser hotel. The hotel will open in 2022 and will be “an all-immersive two-night vacation experience that goes beyond anything Disney has ever created before.” It sounds absolutely incredible and expensive.

There is no update on the price, but the standard lightsabers they sell range from $150-200, so it seems like the prices will range from $200-250. That is just my guestimate and just an idea of what to expect. The lightsaber is still in the Walt Disney Imagineering Research and Development labs, but it will most likely be ready in time for the hotel’s opening in 2022.

What do you think about the new lightsaber? Do the hilts look too large and clunky? Let us know in the comments down below or on our FaceBook page. Don’t forget to check out our YouTube channel, as well.

Check out the YouTube video showcasing the lightsaber here.