Osvaldo Trejo: A Man To Be Remembered 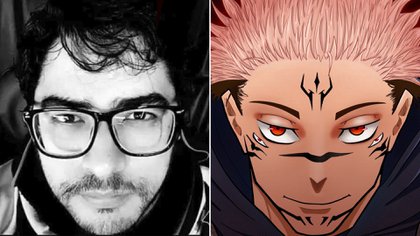 Osvaldo Trejo passes away on April 6th, 2021, shortly after contracting Covid-19 earlier in April, this year. Today, we will be going over his background, and honoring his memory in a few of his most notable roles.

Osvaldo Trejo was born in New Mexico in 1988. Trejo joined the School of Mechanical and Electrical Engineering in the early 2000’s. While attending, Osvaldo joined a theatre group known as Thespis. As a result, this progressed Trejo into the world of Spanish voice acting since 2014.

Osvaldo played many Spanish Dub roles throughout his career. The following are his three more notable roles within the Spanish Dub community:

Jujutsu Kaisen is about Ryomen Sukuna, and his encounter with the paranormal world. After his grandfather’s passing, Ryomen learns of a curse that has been brought onto his school. Ryomen finds the source of the curse, a finger of a being known as Kaisen, and swallows it. Despite Kaisen possessing him, Ryomen still retains his human self. Sukuna now assists the Occult Research Club, seeking the remaining fingers and exorcising Kaisen once and for all.

Osvaldo Trejo has done amazing work in portraying his character. Despite many challenges that faced him, Trejo did his absolute best during the Spanish Dub of the series.

Thanatos, God of Death, from God Of War: Ghosts of Sparta. Image provided by godofwar.fandom.com

God Of War: Ghosts Of Sparta tells the story of Kratos, who seeks his brother Deimos. Zeus and Ares believed that Deimos would bring about the fall of Olympus, due to a prophecy. As a result, Ares and Athena kidnap Deimos. Deimos is then sent to Thanatos, the god of death, where he is imprisoned for years. However, Thanatos realizes that Kratos was the one prophesized. Despite putting up a fight, and killing Deimos, Thanatos falls at the hands of Kratos. After burying his brother, Kratos vows revenge against the gods.

Trejo supplied his talents in voice acting Thanatos for the PSP (Play Station Portable) Spanish release. Thanks to Osvaldo, God Of War: Ghosts Of Sparta made excellent sales within the Latin American gaming community.

In the Dragon Ball Super: Tournament of Destroyers Arc, Autta Magetta hails from Universe 6. The tournament was to determine which of the 12 universes were the best of them all. Magetta easily overpowered Vegeta in his first match against the Saiyan. However, Vegeta eventually insults Magetta. As a result, the Metalman loses the will to fight.

In the Tournament of Power: Universe Survival Arc, Magetta teams up with Botamo from the same universe. Botamo helps by covering Magetta’s ears, and Magetta helps fend off attackers. Thanks to this strategy, the two become an almost unstoppable force.

Osvaldo Trejo lends his voice for Autta Magetta in the Spanish Dubbing. Trejo gave many thanks to the people he worked with for allowing him to partake in his role.

Osvaldo Trejo was a brilliant voice actor within the Latin American community. Honorable mentions for his roles include Attack on Titan‘s Reiss Fritz, and various characters in Overwatch. He was an amazing voice talent, and will be missed.

If you wish to learn more about Osvaldo Trejo and his amazing impact on the world, check out his page here. As always, Stay Geeky.