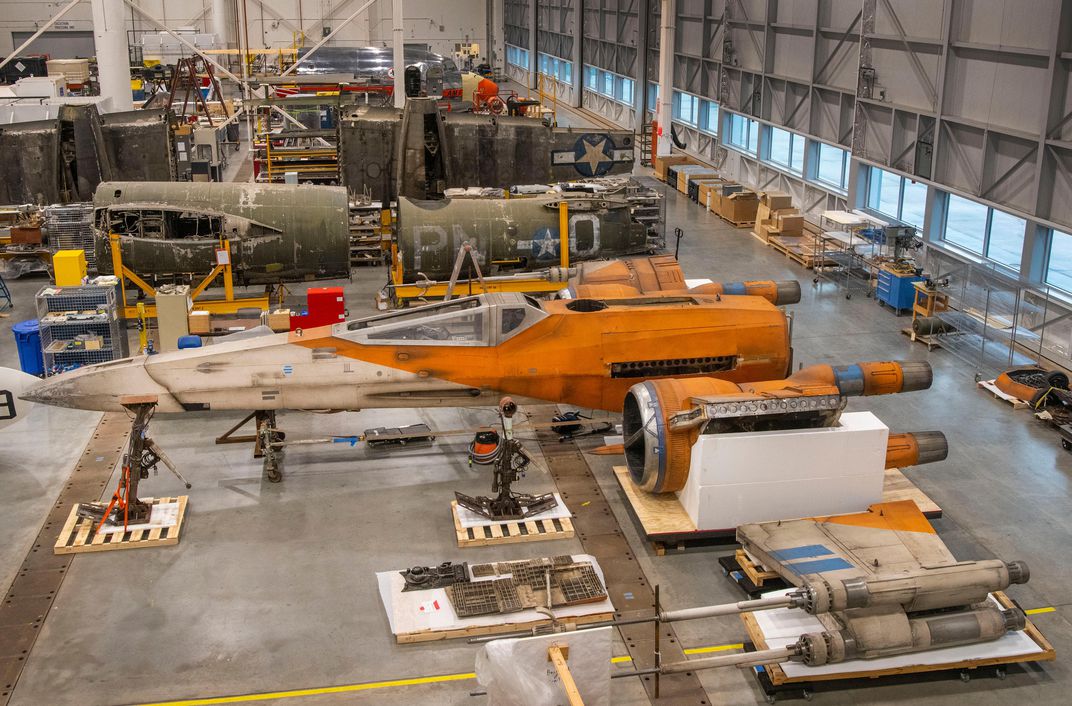 As Star Wars month continues here at GNN so do the announcements! The Smithsonian’s own publication announced that an actual prop X-wing from the film Star Wars: The Rise Of Skywalker was being loaned out to their institution for the long term by Lucasfilm Ltd . The X-Wing itself is currently being restored at the Mary Baker Engen Restoration Hangar, which restores actual aircraft over the years for the purpose of displaying to the public. Visitors to the Restoration Hangar (which is now finally open after being closed due to Covid) will be able to see the restoration in progress from a viewing deck in the upper hangar.

Once restored the X-Wing will go on display later next year, as mentioned in the SmithsonianMag:

“Late next year, the famed film prop will go on display outside the Albert Einstein Planetarium at the Smithsonian’s National Air and Space Museum on the National Mall in Washington, D.C.”

For the uninitiated, The Smithsonian is a series or network of 19 different museums and houses over 154,000,000 combined items in its’ holdings. It is essentially the United States’ repository for artifacts and our general collective culture and history in various fields such as science, art, history, and other fields.

A plane that is up for restoration at the Mary Baker Engen Restoration Hangar in Virginia. Viewing deck for the public at the top. Image from National Air and Space Museum’ website.

The X-Wing itself is said to be “battle scarred” with carbon scoring marks and scratches. Efforts are being made to “distinguish between any scratches that occurred during shipping versus something that was built into the vehicle” according to the publication.

The X-Wing is arguably one of the most iconic fictional vehicles in pop culture and is a perfect ambassador to represent the Star Wars series at the National Air and Space Museum. In the films the spacecraft has gone over several revisions and upgrades. The space history chair for the museum, Margaret Weitekamp had this to say about the X-Wing they are receiving:

“This is a T-70 X-Wing. It’s the next generation. The one Luke Skywalker flew in the original trilogy was a T-65B. The big visible difference is the X-foils that split apart. Each had an engine. The T-70 was designed to include one large engine on each wing. When X-attack formation is deployed, the engine splits into two semi-hemispheres.”

Clearly Weitekamp is well-versed in X-Wing lore and knows her stuff about the star fighter.  This isn’t the first time an X-Wing has been featured as a display piece for the Smithsonian, however. Back in 1997 the Smithsonian hosted a Star Wars exhibit in honor of the franchise’s 20th anniversary. Among the 250 pieces on display as part of that collection was a miniature model of Luke’s X-Wing. It’s always awesome when any facet of Star Wars is recognized by the public, especially the Smithsonian.

A Metal Earth model of an X-Wing. Image from MetalEarth.com

Do you plan on seeing the craft during it’s restoration or rather wait for it to be fully on display next year? Comment down below! For all things Star Wars and geeky in general be sure to check our website often, GeekNewsNow.net , and also follow our social pages. Our Facebook page is here, and our Youtube channel is over here.