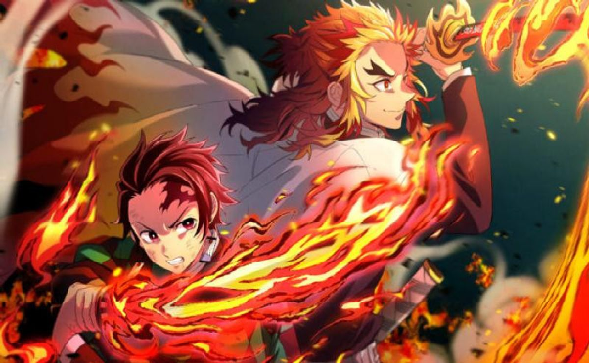 Demon Slayer: Infinity Train takes place after the events of the first season. Tanjiro, Zenitsu, and Inosuke are given the mission to assist Flame Hashira Kyōjurō Rengoku. Rengoku is working on a case involving disappearing Slayer Officers aboard the Mugen Train. Enmu, Demon of the Twelve Kizuki, is sent by his leader, Muzan Kibutsuji, to hunt down Tanjiro. If he kills Tanjiro, Muzan will award Enmu with more power. Enmu begins to grow excited upon learning of Tanjiro’s presence aboard the train, thereby making him a priority. He then uses his hypnotic spells to discreetly subdue the group into falling asleep. Using captive passengers, he plans on destroying their Spiritual Cores inside their dreams, sending them into a never-ending slumber.

Haruo Sotozaki, the main series producer, had directed the film to serve as the sequel to the first season. Sotozaki directed many works such as Tales of Symphonia: The Animation, and Tales of Zestiria: The X. Sotozaki had also won the 33rd Nikkan Sports Film Award in 2020, and the TAAF (Tokyo Anime Award Festival) Awards for Best Director in 2021, thanks to his involvement directing Demon Slayer: Infinity Train.

While Ufotable produced the film, Toho and Aniplex were the main distributors. Demon Slayer: Infinity Train premiered in Japanese theatres on October 16, 2020 and in US theaters on April 23, 2021. Thanks to the series’ overall popularity, ticket sales skyrocketed. As a result, Demon Slayer broke box office records by making $400 Million worldwide, surpassing Studio Ghibli’s Spirited Away.

In 2020, Demon Slayer: Infinity Train won the 33rd Nikkan Sports Film Award for Best Anime Film of the Year. Risa Oribe, also known as LiSA, performed Homura for the films main opening song, and had won the 62nd Japan Record Award for Song of the Year. LiSA also performed musical scores for other works such as Fate: Zero and Sword Art Online.

Rotten Tomatoes had given the film a 96% scoring, praising its animation and action sequences. To top this, Crunchyroll reviewer, Daryl Harding, gave the film praise for its combination of both 2D and 3D animation assets, stating that it even rivaled that of Violet Evergarden: The Movie.

Demon Slayer: Infinity Train will be set for release onto services such as the Microsoft Store and PlayStation Store on June 22nd, this year. The main series Demon Slayer: Kimetsu No Yaiba is available via Crunchyroll and Funimation.

All in all, Demon Slayer: Infinity Train is definitely the movie to see if you’re looking for high quality entertainment this summer.

Have your own opinion on which anime film succeeded in theatres? Be sure to drop on by our Facebook Page, and say hello! And, as always, Stay Geeky!