The Baddest Moms in Gaming 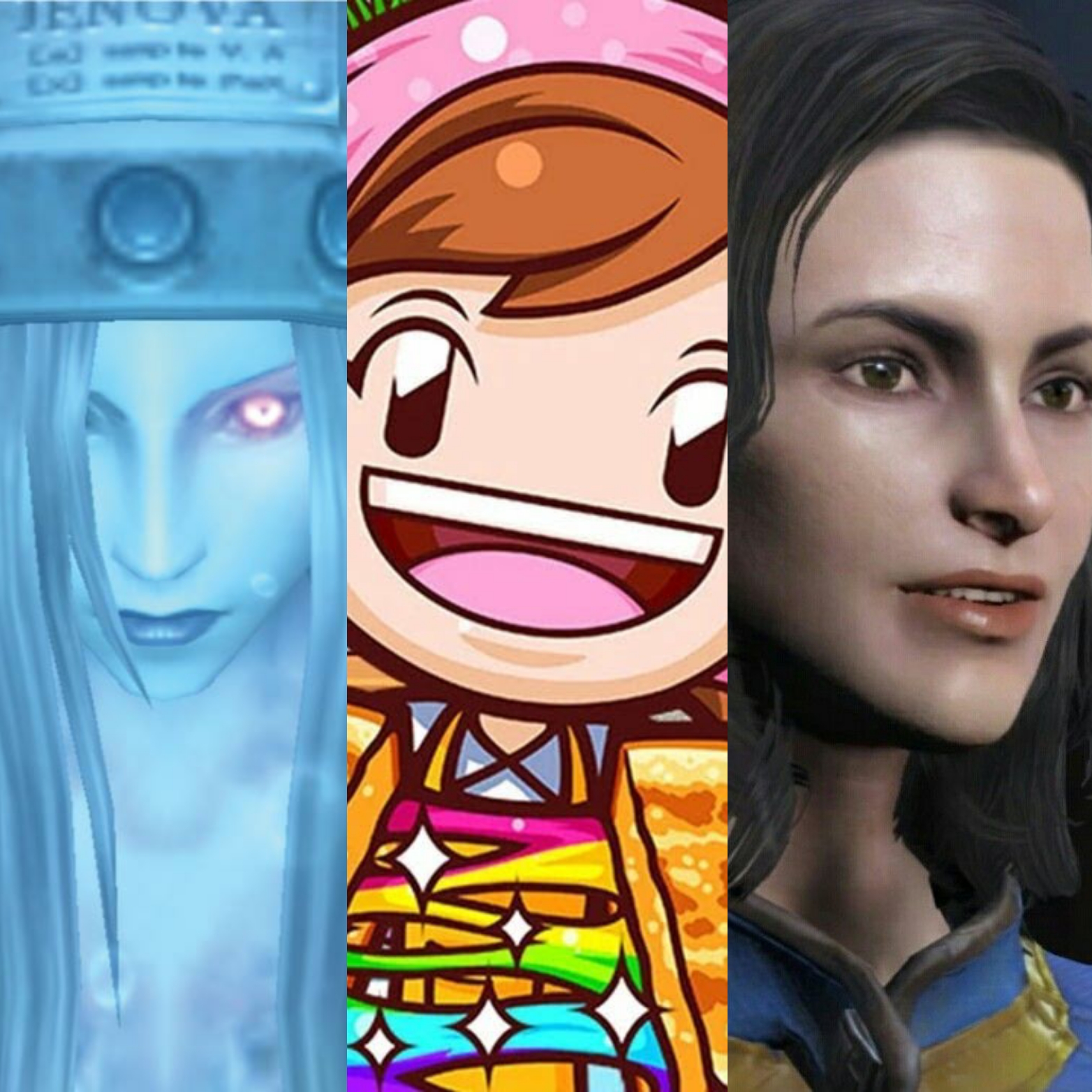 While it is still Star Wars month here at GNN, today we are taking a moment to recognize a special group of people, moms. That’s right, this is mothers day weekend. Despite making up a fourth of the world’s population, mothers are very under-represented in the world of video games (actually there are a lot of under-represented groups in gaming, even women as a whole, but for the sake of this piece we are focusing on moms).

In compiling a list of the most badass /iconic moms in gaming I really had to dig deep here. That said, I think I have put together a wonderful list of top-notch moms who not only educate us (Cooking Mama) but also inspire us to be more(The Boss). Let’s get into it!

Warning! Spoilers for the games mentioned, I made sure to include the game titles in each sub-heading before you get in too deep.

“Mom”, as she appears in the game’s glossary/album.

Citizens of Earth is an RPG that pays homage to the EarthBound games in which you play as the Vice-President of Planet Earth. As the Vice-President you go around recruiting party members in your quest to save Earth from an alien conspiracy. One of the first characters you recruit is your mother, who is more than willing to help out her son. In the early parts of the game, your mom is the backbone of your party.

She serves a mostly healer/supporter role, keeping the party alive and strong with buff support. She isn’t afraid to throw down either with her variety of moves such as: “Timeout” (deals damage and can stun the enemy), “Lecture” (reduces enemy defense), and “Kiss Boo Boo” (restores the last amount of HP damage taken). As one of only two “playable” moms on this list, I felt her inclusion was necessary. Truly our nameless mom has got our back!

This was the closest image I could find that somewhat depicted the moms from the games accurately: (far left) Gold/Silver, (second-from-left) Ruby/Sapphire, (Middle) Black/White, (second-from-right) Diamond/Pearl, (Far Right) Ren and Blue. Image from aminoapps.com

Whether it’s the original Pokémon Red or the more recent mom from Pokémon Sword and Shield, your mom is always in your corner. Not only does she shower you with love but she always provides free healing for your Pokémon. My favorite version though is the mom in Pokemon Gold/Silver/Crystal as she is the first mom to also serve as your manager of sorts. You can send her your money to save to avoid giving it up in case of a loss.

She also will periodically buy you plushes for your bedroom based on how much she has saved for you. Not many moms understand their pre-pubescent kid’s desire to catch ’em all and to explore the world all by themselves, and for that reason we raise our glasses to you, Pokemon mom.

Jenova herself. Image from FinalFantasyUnion.com

No one knows quite where this space-faring alien being came from, all we know is that she has dark plans for the planet she crash landed on. The main antagonist of Final Fantasy 7, Sephiroth, refers to this being, Jenova, as his mother incessantly throughout the three discs of the original PlayStation game. While Jenova isn’t his actual biological mother, Sephiroth did have her alien genes inserted in him as an embryo for an experiment by his biological father, so you could say she was a part of him before birth I suppose.

Sephiroth is so dedicated to Jenova that he collects the pieces of her dismembered body in the hopes of being reunited with her. It is this twisted tale in this iconic game that has secured Jenova a spot as one of the baddest moms in video games.

Eva very much embodies the capable bond girl persona, but she is so much more than that. Originally introduced in Metal Gear Solid 3: Snake Eater as a KGB agent and then revealed to be a double-agent for the Chinese government. EVA worked secretly with the protagonist, Naked Snake, to undermine the KGB and their Shagohod project (A tank that can launch a nuke to the U.S. from deep within Soviet territory).

She mysteriously disappears only to return in the sequel game Metal Gear Solid 4: Guns of the Patriots set nearly 50 years later where she is the head of a paramilitary group in eastern Europe and now goes by the name of “Big Mama”. It is revealed that she was the surrogate mother of the main protagonist, Solid Snake, a clone of Naked Snake. Yeah, I know, the storyline of the Metal gear Solid series is a bit convoluted but that’s part of it’s charm.

The famous “Mama”, just don’t upset her. You don’t want to see her when she is angry.

No list is complete without the eponymous mama from the Cooking Mama series. Simply known as “Mama’, this mom gives you instructions on how to cook, garden, camp, craft, or babysit depending on which game you are playing. The series consists of short mini-games in which you try to create or take care of something and then are scored on the averages of your performance. If you fail Mama’s eyes fill up with flames, but if you do great she gives you nothing but a giant smile and the adoration and approval of a real mama. Trust me, your conscience will make you not want to disappoint her!

Considering everything moms do for the family unit, they certainly are tough. Image from FinalFantasyWiki page.

The Final Fantasy series doesn’t shine a positive light on mothers very often, instead choosing to focus on teenagers and very young adults, or mothers in villainous roles. In Final Fantasy XIII we get to witness the heroic actions of Nora, the mother of one of the game’s protagonists, Hope. Nora selflessly defends and dies for her son from a squad of PSICOM troops who are there t purge them, but not before reassuring Hope that “moms are tough!” Though she has a small role in the game’s story, her death serves as the catalyst for one of the game’s more personal storylines and the strained relationship between Hope and Snow (who tried and failed to save Nora) for the remainder of the game. Few loves are stronger than that of a mother’s for her children. Here’s to you, Nora.

Yes, our list includes another Nora, coincidentally enough. Fallout 4 gives you the option to play either as a father or mother right at the beginning of the game. No matter which you choose, the other character always dies in the opening minutes of the game. Choose to play as the father then Nora (the mother) gets killed. Should you choose to play as Nora (the mother) then your husband dies and you spend the rest of the game trying to get your son back and revenge on the guy who killed Nate. I usually prefer to play as Nora.

What Nora does, kills, or doesn’t kill, is largely up to the player to decide. That said, Nora will have to dirty her hands in the post-nuclear-apocalypse of Boston Massachusetts. Whether it’s fighting off raiders, assassination robots, or giant mutated scorpions, Nora has to be tough to survive, and even tougher to find her baby. She definitely belongs on this list!

“The Boss” as she appears at the beginning of the game before “defecting”.

No, we are not talking about Bruce Springsteen here. “The Boss” is the codename given to a woman known as a hero of World War 2, the “Mother of American Special Forces”, a master of CQC (Close Quarter Combat), the first woman to space, and recognized as the greatest soldier of the 20th Century. Plain to say, The Boss has many accomplishments under her belt. She led the allies to victory in Normandy, and created the first covert group of special forces known as the “Cobra Unit”.

She is responsible for training Naked Snake and turning him into the dangerous soldier he is. Eventually she is offered up by the US during the Cold War in exchange for a botched operation getting swept under the rug by the Soviet Union. Despite the betrayal, The Boss serves her patriotic duty and accepts being labeled as a traitor and dying with a tarnished reputation, with the world never knowing how her death averted a nuclear war.

On top of all she did, she also happened to be the biological mother of the series’ antagonist, Revolver Ocelot. She gave birth to him on the battlefield and the procedure required an emergency c-section, branding her with a snake-shaped scar across her belly and torso. The Boss is eventually killed by the end of MGS3 by her apprentice, Naked Snake(You), who is in-turn given the new codename and title of “Big Boss”. Her death would ultimately be the catalyst that leads to the rest of the major events in the series.

As a gamer Black Friday is my favorite (pseudo) holiday! There is nothing like buying multiple games that are only a few weeks (or...