Taking My First Steps Into A Much Larger World 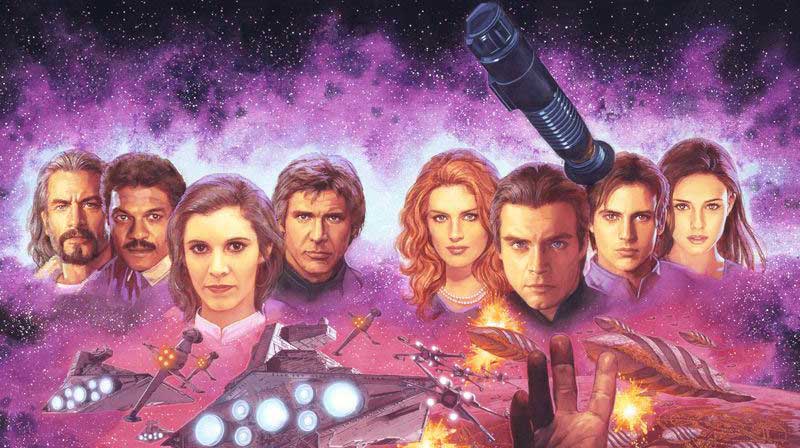 For Star Wars fans May is a special month to us. Usually it is punctuated with Star Wars news, merchandise, and memes. We get “May the 4th” as a pseudo holiday and “Revenge of the Fifth/Sixth” (depending on who you ask it is the 5th or 6th). As a contributor for GeekNewsNow it means writing about Star Wars a bit more than usual! Sure, like most people my introduction to Star Wars was the original trilogy as a 5-year old through my dad. I remember watching the VHS tapes of the 1996 re-release and being absolutely enthralled with it.

Said VHS tapes that we owned as a kid.

But thinking back on what it is that I love so much about the Star Wars IP it’s not even the movies for me, but the original EU (Expanded Universe). Everything that encompasses the greater EU, whether it is books or games, to me that IS Star Wars! The events of the original trilogy only cover a handful of years in the overarching Star Wars universe. The old EU encompasses tens of thousands of years before the films all the way to several hundred ears after the films!

Along Came A Book…

*spoilers for “I, Jedi” ahead*

Summer of 2005 was one of the best summers I ever had. I had just seen Revenge Of The Sith at the tail end of May and heading into June I wanted more Star Wars content! But where was all the Star Wars content? At the time the films were all out and done (Never even thought that in a decade Episodes VII, VIII, and IX would be a real thing) and I didn’t know Star Wars comic books were a thing. Unfortunately I didn’t own a gaming PC or Xbox, so I could only play Knights Of The Old Republic at my cousin’s house. I was hungry for Star Wars content with nothing to satiate my hunger!

Fortunately where I lived, Norwalk CA, every summer, we had an annual community yard sale. Every major block and street had several houses participating in a large city-wide sale. As per tradition my parents gave me $40 and let me loose on the surrounding streets near our home (I was 14 at the time so my parents didn’t worry too much about me exploring on my own). I don’t remember everything I bought that day, but I do remember buying one thing in particular. There was a family down the block that was selling a well-read copy of “Star Wars: I, Jedi” for $2. Something about that cover art just grabbed my interest. I remember getting home, laying in the hammock in our backyard, and diving head first into the book.

Our hero, Corran Horn, gracing the cover of the book.

My time reading the book can mostly be summarized as the following:

“Corran Horn is a member of Rogue Squadron, and his wife is kidnapped by some space pirates. Ok, cool enough I suppose. He comes from a prestigious line of Jedi? Alright, I’m intrigued. What, Luke Skywalker is rebuilding the Jedi Order? Alright, let’s go! Not sure who this Kyp Durron guy is but he used another planet destroyer called the Sun Crusher?! What book was that? I want to read about that! Corran builds a lightsaber with crazy adjustable length? That’s sick! Luke saves him from a separate group of Jedi wannabes, nice! Awww, he finds his wife. What do you mean the book is over? I want more!”

I am pretty sure I finished that book in less than three days, and I now had a ravenous hunger for more EU stories!

Everybody Gets Jedi Children!

Later that summer the family and I went to the mall, and I checked out Borders Books (Remember that store?). I saw there were so many Star Wars books spanning different eras! There was something called Force Heretic 2, I remember that awesome cover art distinctly in my mind. I remember the creepy cover art of Vector Prime, but I wanted to do things chronologically. I settled on getting the Young Jedi Knights collection of books, Jedi Shadow and Jedi Sunrise. My curiosity was focused on wanting to read about how Han and Leia’s twin children underwent their early Jedi training and how they would shape the Expanded Universe.

Over the next few years I read more story arcs in the EU such as the legendary Thrawn Trilogy (and the duology that came after), and parts of the Yuuzhan Vong story arc (way too many books for me to read them all). I particularly adore the Darth Bane trilogy, which really helped flesh out the backstory of the Sith and the Rule Of Two. My favorite ended up being the Legacy of the Force story arc, which I won’t get into details about, but clearly was a large inspiration for the sequel trilogy films we got with JJ Abrams. As for my main man Corran Horn, the character who first expanded the Star Wars universe for me, yup, he ended up having kids who became Jedi just like him.

The final book in the Legacy of The Force series, and my favorite of that story arc.

No One’s Ever Really Gone

I’m not going to sit here and say I read every book in the EU, but I did catch up on the major story beats with youtube videos explaining the gaps in my knowledge. Star Wars, for me, transcends the big screen films. It’s a multilayered saga following the heroic acts of various diverse characters over decades and centuries of galactic conflict and victory! Even more than the films, the EU has so many lessons that expand on what was previously established! It teaches us how good intentions can lead to awful atrocities! How giving up security for freedom is a dangerous slippery slope. And, perhaps my biggest takeaway from Legacy of the Force, that failing to learn from your history will doom you to repeat it! The EU is rich in characters and stories, and most definitely is my favorite facet of Star Wars.

Even though LucasFilm wiped the slate clean and put an end to the original EU to relaunch the new EU. I still have love and reverence for those old stories. Even though they are no longer canon I can take some solace in knowing that most of those old books got rereleased with the Legends banner on them, so new generations can enjoy those tales. As long as we carry those stories in our hearts, they are never truly gone.

If you enjoyed this piece or just want to keep up with the latest Geeky news covering various fandoms, make sure to subscribe to our page. You can also follow us on our social pages such as Facebook here, Twitter here, and our Youtube page here. We have various podcasts and shows uploaded every week to satisfy your hunger for geeky content. This month, in honor of May the 4th, we are running a contest for our biggest Star Wars prize pack ever! Want to score some great merch? Just follow the instructions and join our GNN Greats page here!