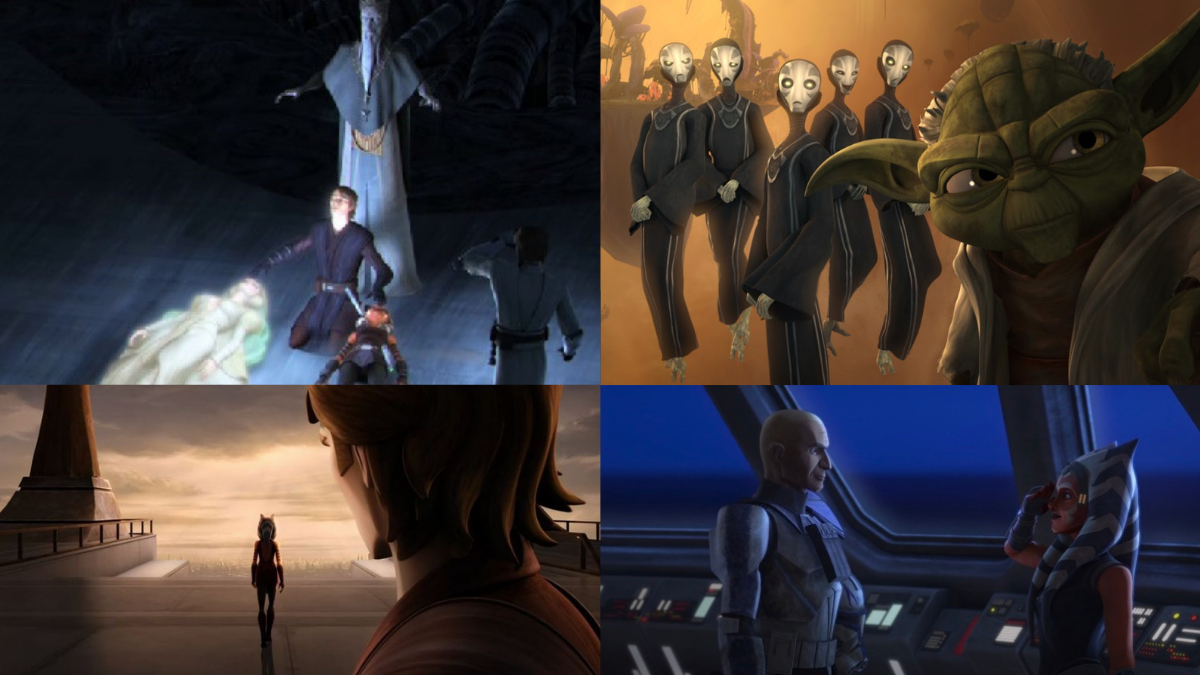 Thanks to Dave Filoni, The Clone Wars has expanded the Star Wars universe in a way that invited so many people to enjoy. The comprehensive series gave so many explanations to the war, relationships, and things that we never thought we’d see.

Here are the top 5 arcs to watch before The Bad Batch premiere.

This is one of the most epic comebacks of all time. Yes, Maul is a villain, but let’s be honest, he is easily one of the best characters to come out of the prequels. This arc shows so much about his background, the planet he hails from, and interestingly, some dark magic.

Where we get to see Maul, both the location and mental state highlight what the dark side does to someone. Everything had been stripped away from him, his identity, his pride, and even his sanity. For any Darth Maul fan, this is the arc to watch. The Clone Wars had really fleshed out Maul’s character and showed how dynamic and intelligent he is.

The Shadow Conspiracy arc (S5 E1, 14-16) serves as a bit of part two to this arc, so we recommend you check that out as well. Remember the ending of Solo: A Star Wars Story? This will explain that, plus a few other things to come in the future of The Clone Wars.

This arc is one of the most interesting and explanatory arcs in the entire series. We get to see Yoda explore an ancient Sith planet, encounter beings of the Force, and so much more about the galaxy, the Force, and Star Wars as a whole. Yoda’s journey and discoveries lend to his understanding of the galaxy and essentially helps him to prepare for his role to save the galaxy.

He gets a deep understanding of the force and what it means to other types of beings who see it differently. Yoda, already as wise as he is, learns a lot in this arc, and it was a refreshing thing to see. Besides, it includes an epic lightsaber duel, deep Star Wars lore, and Darth Bane.

This arc includes mystery, prophecy, beings of the force, and an answer. It shows a planet of the Force. It changes throughout the day while at night, it becomes almost entirely inhabitable. The planet is host to the family of the Force; a father and his two children, a son and daughter.

This arc is where we get to see Anakin’s role in the galaxy. It shows how important he is to not only the Jedi but to these beings as well. This arc is so important because we’ve heard all about a prophecy and the chosen one since 1999. Anakin, Ahsoka, and Obi-Wan are all a part of this arc, as well as a surprising appearance from a wise Jedi.

This arc is important because it shows what happened to Ahsoka and why she had to leave the Jedi order. It was tragic, but the reality is that the writers had to get her out of the Jedi temple and order before they caught up to the downfall of the Jedi in Revenge of the Sith.

Ahsoka endures a lot because of this arc and it gives insight into who she will later become. If you’ve seen her in Rebels or The Mandalorian, then you understand that she is a rogue Jedi, someone who doesn’t follow the Jedi Order. This arc will explain why. I don’t want to give any other spoilers, but I will end this by thanking the Force they didn’t kill her off.

This is by far the most important arc in The Clone Wars because it serves as the bridge between Attack of the Clones and Revenge of the Sith. This arc highlights so much, from Ahsoka’s journey and role in Order 66 to Obi-Wan and Anakin’s mission to save Palpatine to Maul and how he survived the massacre.

Fair warning, this arc is packed with a lot of emotion. I don’t want to spoil anything for you, but I will just say there is a good chance you’ll want to cry. Trust me. This arc was a beautiful way to end The Clone Wars and you will not want to miss it.

This will definitely help you prepare for The Bad Batch because it will properly introduce you to the team. This arc is a bonus mention because it doesn’t serve as much value to the overall struggle of The Clone Wars and where the show’s plot had gone. They are an intriguing group of clones, so much so that we will get to see them in their own series on May 4th.

There is no better way to celebrate May the 4th than with a brand new Star Wars show. With the show set to premiere tomorrow, these arcs will be the best way to not only prepare for The Bad Batch, but also get an understanding of what The Clone Wars had to offer. The Bad Batch will be an exciting addition to help fill in the gaps between Episode III: Revenge of the Sith and Episode IV: A New Hope. With plenty of great characters to look forward to seeing in the show, both familiar and new, it seems that this is the perfect way to pick up where The Clone Wars left off.

How excited for this new series are you? Drop a comment below or on our Facebook page!

The Bad Batch Season One: A Comprehensive Review

The newest Star Wars series to come out, The Bad Batch, had a very successful first season. According to Nielson, after only two episodes, the show had...