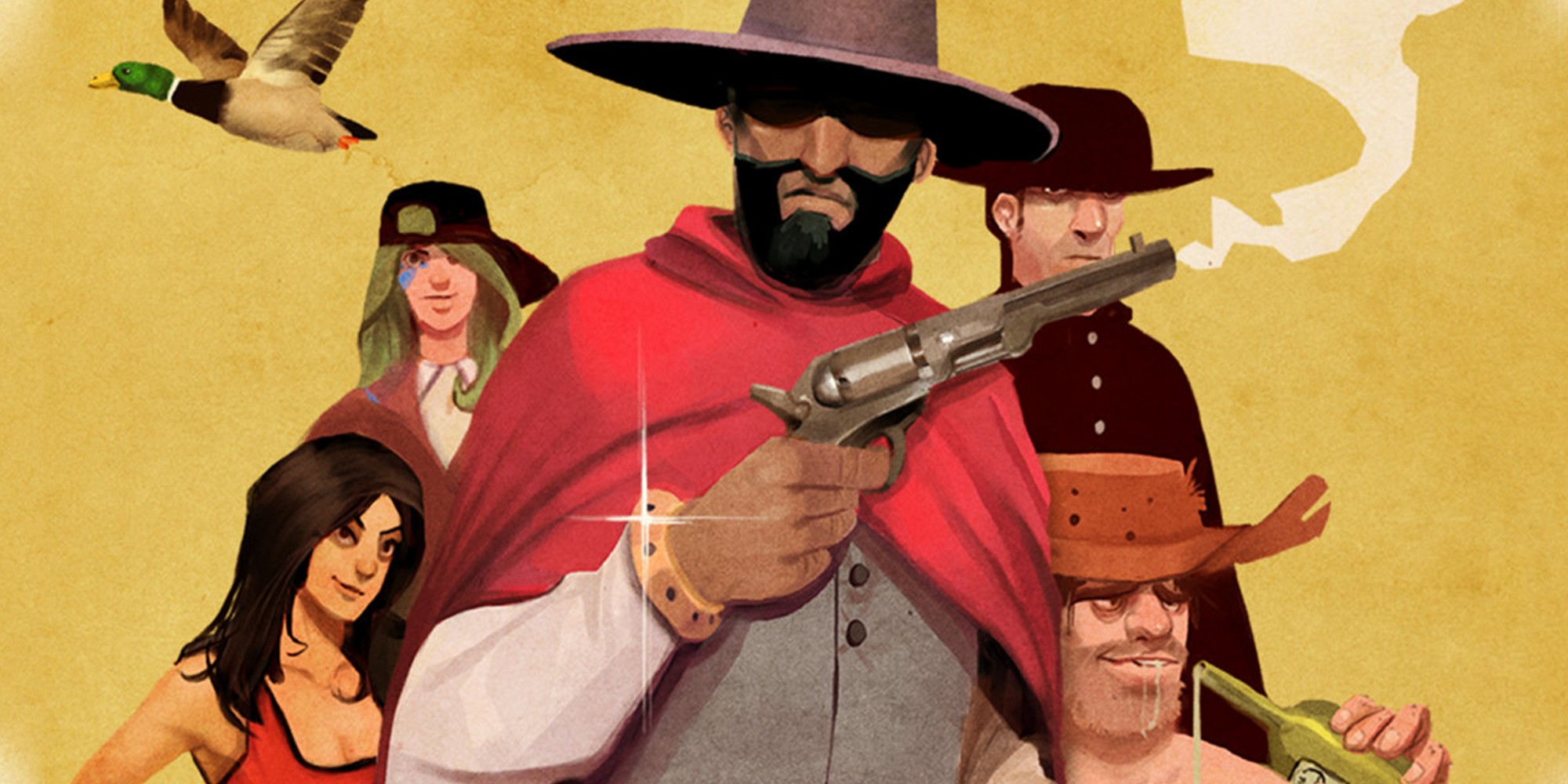 Luckslinger is a 2D side-scrolling spaghetti western-inspired platformer/action game much in the same vein as the NES era Megaman games. Developed by Duckbridge, A game studio from the Netherlands, and published by 2Awesome Studio (who was kind enough to provide us with a code for the PS4 version for this review), Luckslinger originally came out on Steam back in 2015 but the game was just released on PS4, Xbox One, and Nintendo Switch this past week.

The premise is pretty simple. You are a wandering mercenary who arrives at the town of Clovercreek only to find that the locals are going through hardships. Six criminals have made off with the town’s six good luck charms and it’s up to you to retrieve them (and make some gold while you’re at it).

In Luckslinger speed, dexterity, spatial awareness and Intelligence are important, but not as important as good old fashion luck! Luck works in the game as an influential outside force that causes all sorts of things to trigger. The more good luck you have (measured in-game by a bracelet in the top left corner of the game’s HUD)the more enemy bullets will swerve out of your way, the more likely you will survive the Russian roulette minigame, the more likely your bullets will hone in on enemies, and the more likely that platforms will appear to save you from an otherwise fatal fall.

Having no luck (technically bad luck) will cause boulders/chandeliers and other large items in the game’s environment to fall on you, for enemies to avoid your shots, and worse outcomes in gambling and other minigames.

Top Right: bullets left in your revolver. Top Left: Hearts represent the amount of hits you can take before dying, mics are number of lives left, with the gold coin being your money.

Luckslinger‘s gameplay feels a bit like the old MegaMan games and somewhat like the Metal Slug franchise, in which you explore different locales for each main level (a casino, dark mine, moving train, etc.) while platforming and shooting at enemies, but it’s the boss battles that make for the “core” combat experience. Shooting in Luckslinger is always a tactical choice, not so much for managing ammo (your main weapon has unlimited ammo) but because timing is very important.

You can only get six shots off before it is time to reload, and the game doesn’t actively do it for you. Reloading while avoiding enemy shots (jumping cancels your reload) from all sides is a frantic but exciting experience. There will be moments where you try to fire your weapon and then realize you didn’t actually reload, which is something I now realize I take for granted in every other game with automatic reload. You’re not completely alone, however. You are accompanied by your pet duck, Duckbridge. Duckbridge will occasionally blind enemies by perching on them, and will retrieve coins and hearts for you when he feels like it. He also will retrieve your throwing knife every time.

I’ll be blunt, the game can be frustratingly hard at times, but it is always fair. You’ll be dying. A lot. Which wouldn’t be so aggravating if it wasn’t for the lengthy unskippable dialogue before each boss battle. But after so many tries the mechanics of a boss battle will click with you and you’ll be able to get through it. Fortunately the game gives you the option of “new” and “old school” modes. “Old school” will send you back to the beginning of the level if you run out of lives. The “new” difficulty setting will allow you unlimited tries from your last checkpoint, which is a nice quality of life improvement to have.

There was a point where I was stuck for a bit because I forgot that you can dodge roll and I couldn’t get past the wall of bullets coming at me, but that was my fault for remembering too late. Your character, the Luckslinger, handles pretty well. His jumping, dodge, and overall movement does not feel too floaty nor too stiff. Through enough practice (particularly with the third boss) you’ll figure out how many shots, and over how big of an area, you can potentially dodge with a single jump.

When you’re not hunting down the good luck charms and those who stole them, you can explore the game’s central hub of Clovercreek. There is a myriad of activities such as drinking contests, poker, 1-on-1 gun duels, and even a music player to listen to.

dealing with multiple enemies surrounding you is a common occurrence in Luckslinger. These moments are frantic and a true test of your ability to think quickly.

First impressions are impactful, and mine was that this game’s art direction and graphics are not very good. It is very pixelated and looks like something that would have run on the NES or even an earlier system. That said, it kind of grows on you a bit. It becomes less of a distraction as the game goes on, but still I wish they had gone for at least a 32-bit look. The animation is pretty fluid however, in motion the pixel-style doesn’t look bad.

The game’s strongest component though is it’s soundtrack! The music is Luckslinger is so good and really adds life to the environment. I beat the game yesterday and I am still humming the theme that plays in Clovercreek. The mixture of hip-hop beats with the period-setting of the wild west was such a smart choice and reminds me of Samurai Champloo, and that is high praise.

The graffiti on the landscape, the goofy pop-culture bits of break dancing and basketball that pop up during the load screens, the numerous references to classic spaghetti westerns like The Good, The Bad, and The Ugly and Two Mules For Sister Sara really pay homage to western cinema and pop culture as a whole.

Luckslinger is a challenging and well-paced western themed platformer/action game that is enjoyable to play. It took me about six to seven hours to finish, which is the perfect length for the game as anything beyond that would risk it overstaying it’s welcome. The whole luck mechanic is clever and helps differentiate it from similar games. It is a love letter to spaghetti westerns and has a fantastic soundtrack.

Despite that, it does take some time to get used to the overly pixelated retro aesthetic. The unskippable boss dialogue is a bit irritating, the writing/dialogue is hit-or-miss at times, and the platforming elements can be a bit tedious. I played the PS4 version of the game and, for those who want to know, the game is a pretty easy platinum trophy to get and can be obtained within the first two hours. With that said we give the game a 7.5 / 10, but a really strong solid 7.5!

Have you played Luckslinger before or do you plan on snagging it? Comment down below your thoughts! For more reviews, news, opinion pieces, and geeky content be sure to subscribe to our site and our socials! Our Facebook page can be found here and our Twitter here.

Valve’s New “Steam Deck”, Who Is It For?

2021’s E3 Nintendo presentation had something for almost everyone. While there were a fair amount of things I personally was looking forward to, there...

Joy-Con Drift Fix: Putting the “Joy” Back in Joy-Con

So you bought a Nintendo Switch, you’re running free through the wilderness of “Breath of the Wild”, or racing your friends in “Mario Kart...