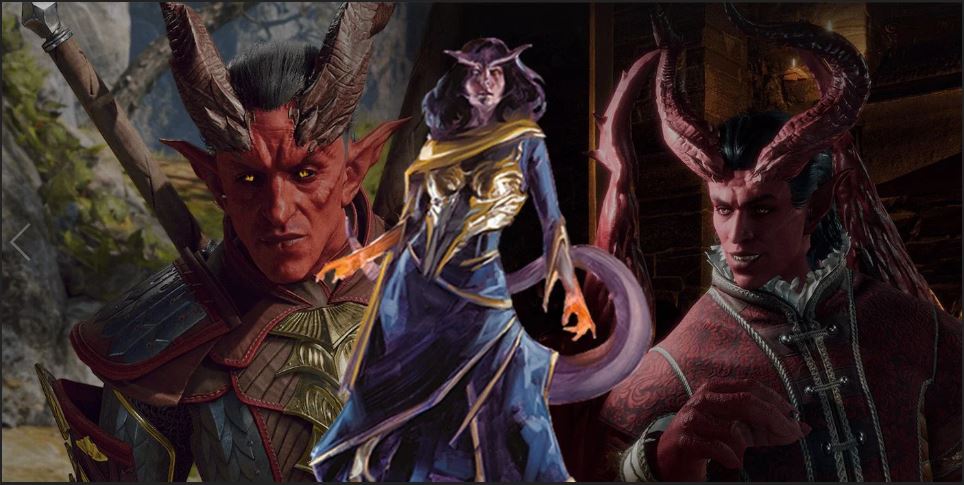 Outcast, scorned upon, mistrusted, and disliked by all are the infernal race of Tieflings. Beginning as a core playable race in 4th edition Dungeons and Dragons, their origins go back to the 2nd Edition of D&D in the early 1990s.

They could be described, in the crudest sense, as a race of “humanoid devils”. Walking upright, with a tail, horns that protrude from their head, and canine fangs, their skin color can range the whole human spectrum including shades of red or purple.

Tieflings allow for some really interesting player character storylines. They have no homeland to call their own. Outcasts of society. Their appearance and lineage are not their own fault, but are rather an elder curse placed upon their race. However, because of their appearance, and their natural connection to the infernal plane, they are distrusted wherever they go. Below is a basic chart similar to the others in my other “Dungeon Crawl” articles, that outlines the skills and benefits of being a Tiefling.

Good possible storylines for a Tiefling character could include being a circus performer, a thief, a bard, or a rogue. Does your Tiefling attempt to conceal their appearance or embrace it? Do they study the infernal arts, or, in an effort to adapt to society, taken a vow of peace as and worship one of the benevolent gods as a cleric. Below is a sample backstory I have written, specifically for this article, for a male Tiefling Sorcerer.

“Society has betrayed Amnon Creed based upon not only his appearance, but even if that were enough, his pursuit of knowledge into the dark magic arts. No longer is he welcome in open society, Amnon traveled the world from caravan to caravan, seeking Necromancers, and dark sorcerers. If his appearance is that of a “devil” then indeed he shall become one in the minds of his opponents and rivals. The lust and search for power have however led him down a path he cannot escape, bound to a Necromancer, he seeks to break his bond and free himself from his clutches. He isn’t a demon of virtue or righteousness, but one of suffering. Longing to end his torment, kill his master, and anyone who gets into his way. In the end perhaps there is good in him, but his rage and growing connection to the infernal planes has pushed it down deep.”

Not all characters you create have to be extremes of good or bad. Much like people, their alignment can fluctuate and evolve. They can grow, or stay morally grey. In the next article I will discuss character alignment and what it means for you. Also, be sure to bookmark (Ctrl+D) the Geek News Now website to not miss any of our coming information, articles, contests, and giveaways. Follow us on Facebook, Twitter, Youtube, and Twitch. Stay Geeky my friends.