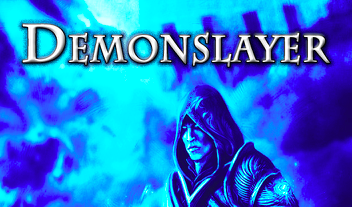 Alexander Ferrick is back with a 200-page magical prequel to his book Aetherstorm, called Demonslayer. Ferrick takes the reins once again with a thrilling story, filled with tricks and betrayal, light and darkness and the greed that surrounds us all.

We follow Micah, a young man just trying to get through his life with his brother, Lucius, and his father.

The tensions between the elves, humans and dwarves have never been higher, especially after a terrible accident that leaves both boys to fend for themselves.

If you read Aetherstorm, you would recognize Micah. Yes. It’s the very same magic wielder who defended and died protecting Luca and Garron. What’s wonderful about this series is the fact that you can pick up any of the books and not be lost, much like the Graceling trilogy. You can read them in any order. As you read more of them, though, more things connect, as do the character arcs.

So, if you read, Aetherstorm, any character that has a vague appearance has an important role in Demonslayer.

Demonslayer connects all the dots that were left open in Aetherstorm. From a magical cloak, to a backstory that had my eyes dancing and wild reading it, Demonslayer is a perfect fantasy quick read that you can either read on it’s own, or continue the story, wandering the kingdom of Sarin.

There were multiple times I was reading and realized how everything connected. I would sit there, gasp and then start scolding the characters for falling for a betrayal and trap. It wasn’t like they could have heard me through the many pages, but I still scolded them.

And if you want a little taste of Aetherstorm, we still have Thorisg’Ad! The cinnamon roll of cinnamon rolls is back and swinging(quite literally). His past with elven royalty was deeper than I thought. The younger dwarf knew Maronir’s father, Rimoar, at the beginning of Maronir’s adventure.

Scora, Maronir’s bodyguard and best friend in Aetherstorm, has a HUGE role in Demonslayer. Without Scora, Maronir would be very much…well…dead. Scora’s bravery and loyalty is demonstrated in Demonslayer, and it was much more than I ever thought it would be. Funny enough, it seems that all of these characters that died or fell in Aetherstorm, are more closely connected than I ever thought to be.

Just like in the first book, we find out easily, why the story is called Demonslayer. Don’t worry. The battle to discover the reason for the title is just as epic as the ending in Aetherstorm.

I also saw where Maronir got his cool and controlled composure…damn… I already know that whoever he ends up with is going to be spoiled so badly by him. Seeing Maronir, and everything he had been taught, he’s a straight up gentleman.

Yes. I already knew that, but this book only strengthened the idea.

And poor Riomar…I’m not going to spoil anything but wow. His family low key really sucks. His brother needs a chill pill, and maybe a long, one way vacation.

Listen, man. If you’re pissed about something you cannot control, maybe you should focus on something else? Like, maybe therapy?

If Sarin had a therapist, their ears would be full with the craziness and drama that is decimating this kingdom, one human village at a time.

What I also loved about this book, on top of the amazing scenery and fights, was the banter between characters. The main villain almost broke Thorisg’Ad’s door and the dwarf simply yelled after the villain, who could have easily killed him, that he would get billed for the damage. May pages later, the villain tells Micah how much he’ll enjoy killing him and Micah simply responded with, “Do me a favor and hurry up about it.”

I laughed so damn hard.

Just like the Marvel movies, this book balances the intense fight sequences with a bit of humorous dialogue and funny moments. The comic relief has a wonderful presence in Demonslayer.

At the end, Ferrick ties everything together with the meeting of Luca and Garron.

If you like fantasy books, with a splash of humor, betrayal, family ties and magic, pick up Demonslayer. You won’t regret it.

Check out our Facebook page for more geeky news!