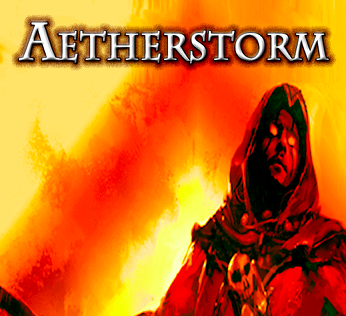 Sliding head-first into some new, young adult fiction, indie author, Alexander Ferrick, created Aetherstorm, a book twisted with magic, elves, dwarves and demons. I remember opening the book and glancing at the page count, wondering how Ferrick was going to tell a thrilling fantasy story in less than 200 pages.

But he did and damn. I was at the edge of my seat the entire time.

Also, this review has no major spoilers in it. Any sort of spoiler would be in the first two chapters in this well-written story.

Not only did this quick, fast-paced fantasy read cover serious topics, indirectly, such as racism, the characters were likeable, each unique in their own ways. Many times, I see authors writing characters that act or talk the same, or start to merge personas as the story goes on, but Ferrick didn’t do that. Each character stayed themselves, no matter what the other’s did.

The world building was very well done. I followed along easily, visualizing everything in my head, falling for the characters one by one, as well as the storytelling. I even saved three quotes as I went along because of how much I loved them.

Two of these quotes are said by Maronir, the Elven Prince of Sarin, who I fell for relatively quickly. He reminded me of a much more logical Prince Rowan, maybe because both have white hair. If Spock from Star Trek and Rowan from Throne of Glass were thrown in a mixing pot, we would get Prince Maronir.

He carries on his father’s legacy, protecting the lands from the demons his ancestor banished hundreds of years ago. Now, as these same demons gain their strength, cloaking themselves as the forms of elves, they invite the strongest warriors, magic wielders or not, to a bloodbath.

Luca and Garron, two humans, are dragged into this mess after their mentor tries to fight off one of these demons and fails. Desperate to avenge their mentor, both Luca and Garron, a magic wielder, travel across the lands to the Aetherstorm, the same competition that their mentor was invited to in the first place.

The Prince of Sarin moves to the Aetherstorm, too, after interrogating a demon that had been captured. He is accompanied by his own mentor and bodyguard, Scora.

On the way, Maronir meets Luca and Garron, as well as an elf-dwarf hybrid and assassin, Cilenia, who hates the royal line with her entire being.

I know, right? It’s a great set-up for an enemies-to-lover ship. I ship it, even now. Perhaps I’ll call their ship name Maronenia. I like that name. I can see it, too, with her fierce personality and his calm, chivalrous manner. I bet they’ll end up like two peas in a pot.

One of my favorite lines is when Cilenia says to Maronir, “You speak with a silver tongue, Prince Maronir, son of Rimoar, but if I discover it is forked, I will cut it out.”

Joining them, after making suits of armor for both Luca and Garron, is Thorisg’Ad, a dwarf that reminded me a lot of Gimli from Lord of the Rings. He’s the type of person that would give the best hugs, and would hug you from behind. He’s the cinnamon roll who would tear apart anyone who would hurt you and tell you terrible stories by the campfire when you’re trying to fall asleep. I can imagine myself laying there, staring at the stars with Garron and Luca, while Thorisg’Ad starts telling a story that is so preposterous and ridiculous that my laughing wakes Maronir, which then wakes Cilenia.

Come to think of it, Cilenia would probably hate me, at least at first. I bet we could become quite a pair if time would allow it.

I loved this story, from it’s kicking off the ground running start, to its action-packed finish. It was a quick, fun read that I finished in just a few hours. The characters worked well together. They fought together like a family would. Another thing that was cool was even though these warriors worked in tangum, there wasn’t a romance that kept them upright. Don’t get me wrong, I love romantic flare, but this group didn’t need it to end up strong.

Yes. Of course I do. I potentially see Cilenia and Garron working out, too, but I like the tension between Maronir and Cilenia better. I feel like it would be such an epic turn of events for that to happen.

I’m excited to see what this next book has in store as well as the many books to come. Hopefully, according to Ferrick, there should be over five by the end of this band of misfits’ story.

But before you go, let me leave you with this quote, said by Maronir, that made me smile as much as shudder and shake.

“In the time you will learn, my friend, that the worst monsters are beautiful.”

Click here for the link to get you own copy of Aetherstorm.