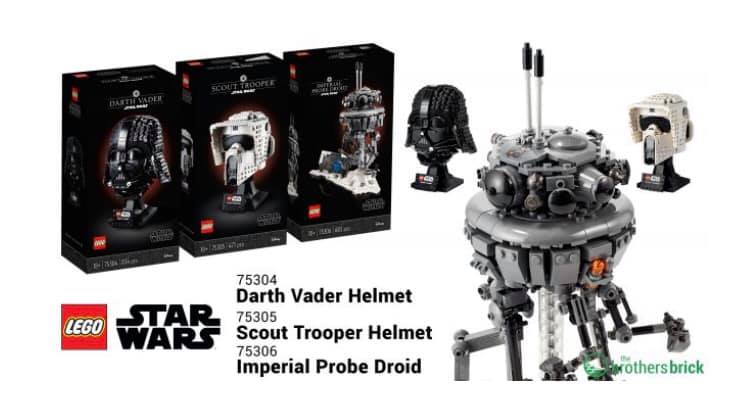 Pictures for the Spring 2021 line of Star Wars Lego sets have been revealed. Thanks to retail giant Walmart, we’re getting a first look at three new Star Wars construction sets for adults. LEGO will continue their line of Star Wars Helmets with Darth Vader and the Scout Trooper. The Helmets Collection started last year with Boba Fett, the Stormtrooper, and the TIE Fighter Pilot.

The Helmet series has been hugely popular among the adult collectors and has even inspired some to do MOC’s (My Own Creation) to complete the bust of the helmet they have. There had been some similar sets released in 2019 for the 20th anniversary of Lego but they were very exclusive and not made widely available.

Next to the two helmets, the Imperial Probe Droid will get the LEGO treatment once more. The droid has been made in minifigure scale quite a few times before, but this time it consists of a lot more than 25 pieces and will be in a much larger scale, making it a UCS-style droid similar to 75187 BB-8 set or more recently the 75278 D-0.

There’s no word yet on precisely when the sets will be released or the prices. These sets vary a bit in size from the previous wave, so we’re not sure if LEGO will price them at the same $59.99 USD. It is possible that since these are larger it is possible that there could be a price increase but that is normal.