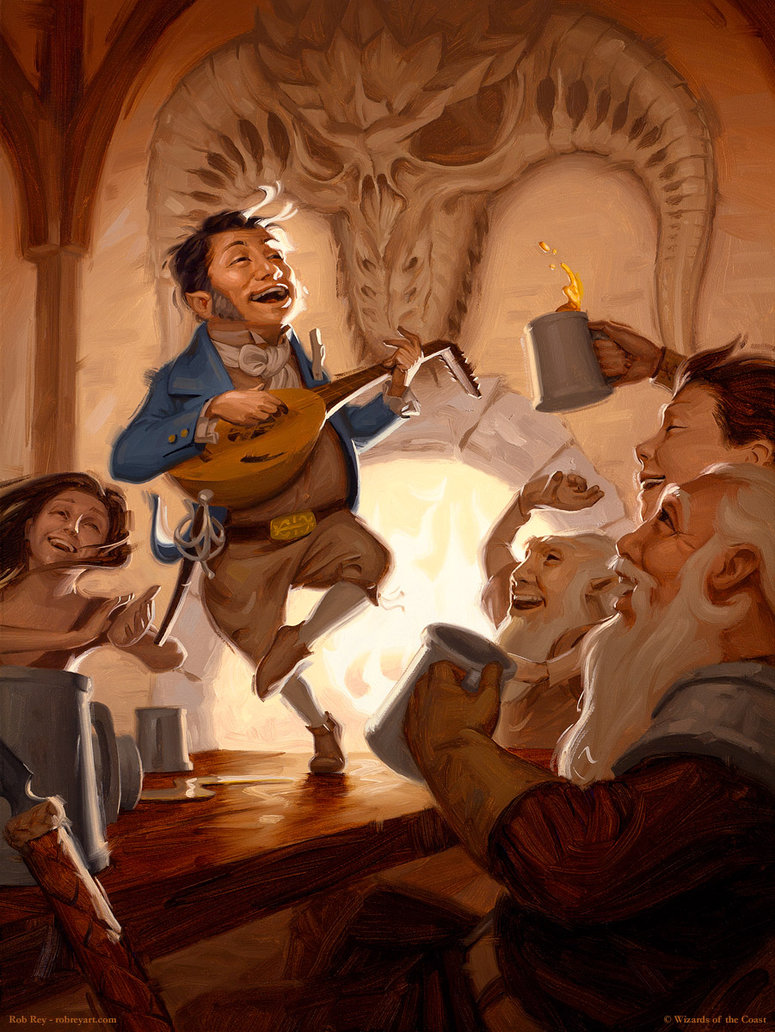 Original art for Wizards of the Coast by Rob Rey, from robreyart.com

I feel that the three races of Humans, Gnomes, and Halflings, could all be summed up in one article. There is an element of innocence and youth to these three races in my opnion.

Starting with Humans in the world of Dungeons and Dragons, we learn they are the youngest of the races of the world. Not only that they are younger in terms of existence, but also have the shortest lifespans overall.

Because Humans have the shortest lifespans, they also tend to be more ambitious, spontaneous, and often creative than other races. They try to fit as much into their lives as possible. Humans can play any class of character, have little restrictions on what they can and cannot do. Humans have a resolve that is only measured by their own inner strength. Because of this, a Human character can be a great character for a first time player to Dungeons and Dragons. Naturally they would be the most relatable of the races.

Just because the Human race in D&D mimics real life more than the others, does not mean your backstory has to any less fantastic. Create tragedy in your character’s past. Create love, hope, fear, loss, the same as you would any other character. Here is an example I am creating as I write this article. If you like it feel free to use for your self.

“Nived Steward is a Human blacksmith hailing from the village of Pinth at the southern edge of the Oberon Mountains. He stands about 6’2”, and is 200 lbs of blacksmith muscle. Spending his days slaving away in the forge he dreams of the adventures he hears from the soldiers he makes armor for. His shop is surrounded by weapons of pure craftsmanship, masterfully created by his 20 long years behind the forge and anvil. The town was a quiet and sleepy one, that is until the Kobolds came down from the mountains. A rock slide was created by the Kobolds, smashing buildings in the village including the forge he worked in. Nived was rendered unconscious under the structure, but survived, only to discover his town and his home with his wife and daughter was destroyed. None were spared save himself. Powered by rage and grief he took up arms found in the rubble of his shop, and sets off as a fighter on quest to avenge the death of his kin, his wife, and his child.”

Gnomes are probably the happiest of the lot. Living upwards of five centuries, they find enjoyment in the pure act of being alive. Excitable, friendly, always acting as if they can’t get their many ideas out of their heads fast enough. Gnomes offer a chance to roleplay a very active and playful race. There are two main subsets of Gnomes; Forest Gnomes and Rock Gnomes

Forest Gnomes have a natural knack for illusion and stealth. Being rare and secretive, they are not as prominent in mixed societies. However their ability to survive is almost second to none. Being small, quick, and have the power to conceal themselves and their environment, a Forest Gnome can survive anywhere in the wilderness. Something to consider if you choose to play this type of Gnome, why is your character on the quest now? Why leave the world they can so easily hide and survive in?

Rock Gnomes are tinkerers and master craftsman. Hardier than other Gnomes and many other races, they survive on their skills of usefulness, craftsmanship, and trade. Most Gnomes found in the world of Dungeons and Dragons are Rock Gnomes. If you have not played a Gnome character before this would be a good starter choice over the Forest Gnome.

Last of this article are the Halflings.

When you think of Halflings in Dungeons and Dragons, you should reference the “Hobbits” of “The Lord of the Rings”. Polite, courteous, not looking to stir up trouble. Often just trying to blend in and hide in a world so much bigger than them. Halflings are small and practical. Looking to minimize their work, and time wasted in all things. When creating a Halfling character, there are two sub-types, but Halflings in general will take up the call to adventure to defend their communities or support their friends. Maybe they just get the urge to explore the world before settling down in a hovel under a large tree.

Stout halflings are the hardier lot, right down to having natural resistances to poison. Having a strong Constitution, many people theorize that Stout Halflings are of Dwarven blood.

Race chart for Human, Gnomes, and Halflings. Made my me

Next week we will look at the awesome race of the Dragonborn. Comment down below which of these races you would play, or maybe what original backstory you would create for a Gnome or Halfling. Also, be sure to bookmark (Ctrl+D) the Geek News Now website to not miss any of our coming information, articles, contests, and giveaways. Follow us on Facebook, Twitter, and Youtube. Stay Geeky my friends.