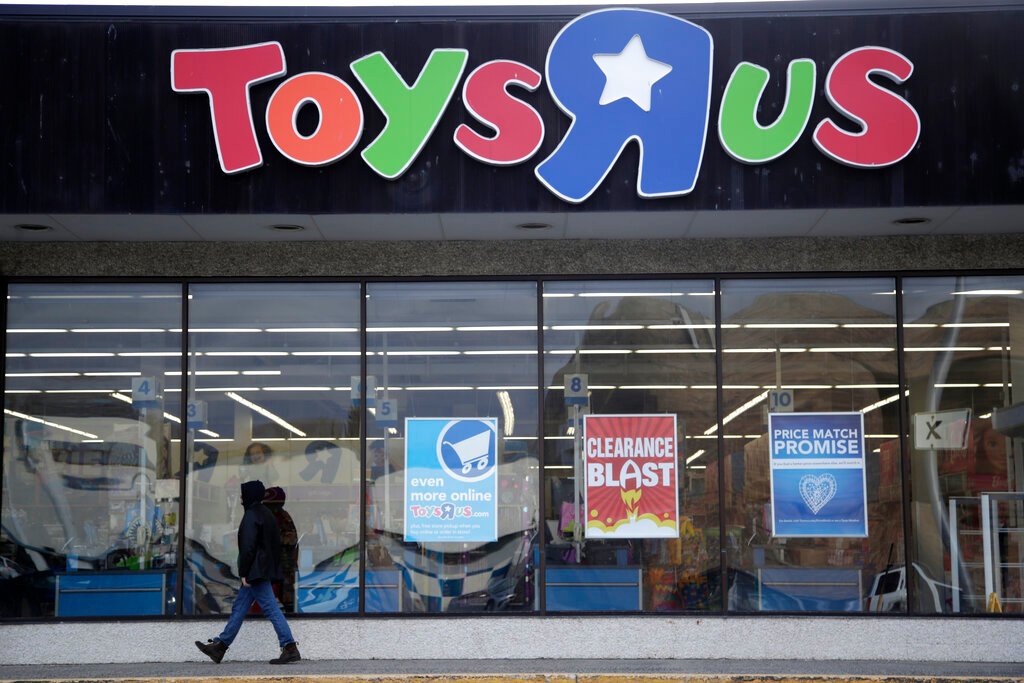 FILE - In this Jan. 24, 2018, file photo, a person walks near the entrance to a Toys R Us store, in Wayne, N.J. WHP Global, a New York-based brand management firm that already owns Anne Klein and Joseph Abboud, is taking a controlling stake in the parent company of the Toys R Us and Babies R Us brands. The deal, announced Monday, March 15, 2021, comes nearly two months after the closure of the only two Toys R Us stores that were part of a small U.S. comeback attempt by the iconic toy chain. (AP Photo/Julio Cortez, File)

It appear that very soon we will no longer have to grow up. We will all be Toys “R” Us kids again. In 2018 we were dealt a major blow as everyone’s favorite toy store closed the doors for good in North America. Since the closing of the toy giant North American shoppers have had to look for their bikes and trains and video game at other outlets such as Target or even online at Amazon. There was just something about going into a huge store with nothing but toys and collectibles. It fascinated and intrigued both kids and adults alike. I myself grew up going to Toys “R” Us (TRU) and even as an adult walking in to buy the latest Star Wars Lego sets or what ever the latest hot toy was. Now it seems that the sleeping giant has awoken.

The brand management company WHP Global announced Monday it has acquired a controlling interest in TRU Kids, the parent company of the Toys R Us, Babies R Us and Geoffrey the Giraffe brands.

“We’re in the brand business, and Toys R Us is the single most credible, trusted and beloved toy brand in the world,” Yehuda Shmidman, chairman and chief executive officer of WHP, said in an interview. “We’re coming off a year where toys are just on fire, and for Toys R Us, the U.S. is really a blank canvas.”

TRU filed for bankruptcy protection in September 2017 and closed the last of its British and North American stores by June of 2018. Operations in other international markets such as Asia and Africa were less affected, but chains in Canada, parts of Europe and Asia were eventually sold to third-parties.

TRU Kids has tried a number of strategies to stir up momentum since, including opening two pop-up locations in the United States with help from tech platform b8ta. But those closed earlier this year due to poor mall traffic, which has been especially suppressed during the Covid pandemic. For a period of time, big-box retailer Target powered Toys R Us’ website. Currently, all purchases on ToysRUs.com are redirected to Amazon.

Going forward, WHP said it will be managing the global Tru Kids business, and guide its expansion. Toys R Us and Babies R Us together have over 900 branded stores in more than 25 countries — in parts of Europe, Asia, Africa, Australia and the Middle East.

In North America, Shmidman said the plan is to open Toys R Us stores, again — ideally a number ahead of this holiday season. He said this could come in various formats: flagships, pop-ups, airport locations or mini stores inside other retailers’ shops. WHP hasn’t yet set a number for how many locations it plans to open in the U.S.
“There are so many malls that will no longer be in the future, so we don’t need to be there,” Shmidman said. “But we could be in malls that do have traffic. … So we really have an opportunity not just to capture that experience for toys that people are yearning for, but also capture where [people] want to shop. That will be very interesting post-Covid.”
For more geeky news check out our newly redesigned website check us out on Facebook and check out our gamers over on Twitch.
For the full story click HERE.

In the mid-Maine town of Bangor, known for author Stephen King and its giant statue of Paul Bunyan, two men and their team work...