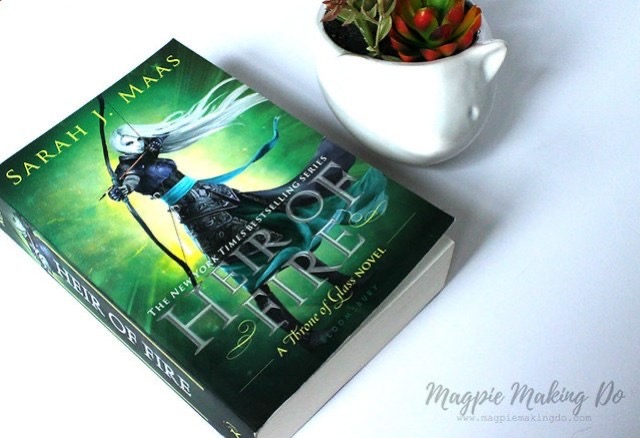 I read Heir of Fire.

And if you haven’t yet, you should. You should also scroll to the next story and then come back to this once you have finished reading the book, because there are major spoilers ahead.

Are we good now?

I’m going to try to review and express my opinions on this book in a calm and collected manner, because this story decided it would be a fun idea to rip my heart out, stop on it with a stiletto heel and then shove it back into me while simultaneously setting me on fire.

Celaena, my favorite assassin, is back, but with a different name. She’s facing her past, her heritage, her bloodline as she becomes the princess of a fallen kingdom, a princess that ran and fell into a raging river and was presumed dead.

She travels to Wendlyn, where she moves to meet with the Queen of the Fae, Queen Maeve, to find the missing Wyrd keys, objects of power that could be used to cast out the rising force of the Vlag, terrible demons that have poured in from other realms to take over the world.

This is the book where the series really picks up, where I find out exactly what happened to Aelin, how she washed up on the riverbank dying when the king of assassins offered her a job and a name. She took it as a means to survive.

And even though she knows her bloodline, she insists that her name is still Celaena.

Girly, you are literally Aelin Ashyver Galthynius, the queen of Terrasen, the descendent of humans and fae, and a powerful, cocky gorgeous badass who needs no one to save her. There were multiple times I glared at the book when Aelin repeatedly said her name was Celaena, not Aelin.

Take your title or I will.

I discovered in this installment of the series that Aelin is demi-fae, a species of fae that can transform into both a human and a fae form. Oh–and also, if you don’t know what a fae is, I got you. A fae is like a fancy elf. According to the internet, a fae is a short term for a fairy. These fae, though, in this world, are elven-like creatures with strong abilities and immortal life spans.

The author of this series, Sarah J. Maas, has her fae characters poses an animal form. They can transform between their fae and animal form at will. Aelin’s animal form, because she is demi-fae, is her human form.

And damn. On top of Aelin being able to turn into a fae with long canines, super speed, strength and healing, this girl has magic. She can create, manipulate and control fire.

A strong, independent, powerful fae young woman with the passion to read and the confidence to give her that nice swaggering touch? Count me in.

Away in the depths of Welwyn, she is out of the clutches of the king of Adarlan, where she can finally use her magic. Before, the king had been blocking magic in his kingdom. Aelin was finally able to access her potential and power.

And who better to train her than Rowan Whitethorn, a powerful fae warrior who is bound by a blood oath to Queen Maeve…and hates Aelin’s guts.

I’m not kidding. He loathes her. They beat one another up several times during their training sessions. He calls her selfish and stuck up and spoiled. He forces her past what she is comfortable doing with her magic. Rowan even threatens to whip her, not knowing she had been a slave before.

Does he still fall for her?

H-E-Double hockey sticks yes he does. They help each other heal, after they grow to become allies and friends and not the acquaintances that want to rip out one another’s throats.

Damn it. I fell for him too.

Add him to the list of book characters I have fallen in love with–right next to Rhysand from A Court of Thorns and Roses and George Weasley from Harry Potter.

Fan art of Aelin and Rowan

The slow burn these two have is spectacular. He saves her. She saves him. She throws herself into a battle against life-sucking demons to save him, even as they drag her away and feed on her pain. She’s okay. He got her back, and in the end, after everything, she storms up to the Queen of the Fae, this feared fae woman who hates demi-fae, doesn’t think of them as equal because of their human blood, and Aelin threatens her. Aelin threatens this woman, who has at least three powerful fae warriors sworn to her by a blood oath, an unbreakable vow where those who swear have to do everything their master says.

Aelin storms up to her, after accepting her name, her right, her heritage, her powers and demands that the blood oath on Rowan be broken. She risks her life to free Rowan, because she knows what it’s like to be rendered completely helpless.

And when Maeve says that the oath is eternal, Aelin looks her aunt right in the eye and says, “I don’t care.”

Have I mentioned how much I love her?

Now, enough about this heir of fire. Let’s journey across the sea, where my favorite cinnamon roll prince Dorian is doing.

Dorian, Chaol(the captain of the guard) and Aedion(Aelin’s cousin), are working with rebels to take down the king of Adarlan. Not only are they trying to stop the king. Sorsha, a rebel and a healer that hides and protects Dorian’s magic is there swinging, too.

Well, until at the very end of the book where her head gets cut off.

Yeah, sorry to switch the mood, but I cried for this. She was strong and adorable, and completely in love with Dorian. Dorian loved her too. He loved her even after his own father murdered her in front of him. She was the name that brought him back into focus when his father discovered his son’s magic and snapped a Vlag collar around Dorian’s neck, letting a demon prince take over Dorian’s mind and body.

Sorsha was what kept him fighting.

And they were adorable together.

But no. Sarah J Maas just had to swing the ending blow for her. I loved her. I cried for her. I was sitting on the couch in my living room when I started to cry. My dad peaked over and had to ask me if I was okay.

No, dad. No. I’m not okay. My cinnamon roll is now possessed by a demon. My favorite general, Aedion, is now locked up and sentenced to death for treason and the captain of the guard is running for his life with a bunch of rebels mourning the fact that he couldn’t save his best friend.

I called his group C.A.D.S (Chaol, Aedion, Dorian, Sorsha). The dynamic they had all together was fantastic, even if Dorian and Chaol had to warm up to Aedion first. I loved how they moved and worked together as a team. It made it ten times sadder when everything fell apart.

You know what did piss me off? In this book, you really see a true side of Chaol. When I mentioned he was opinionated in my Crown of Midnight review, I meant it. Even Dorian saw how Chaol was acting towards Celaena’s abilities, and how disgusted he was, even though Dorian has magic too.

So Dorian, being that cinnamon roll king that he is, just straight up looked at Chaol and snapped, “You cannot choose what parts of her to love.”

I threw my fist in the air for that part. You’re damn right Dorian.

And while Dorian was conspiring against his father, and Aelin was up shooting middle fingers at a powerful fae queen, Maas introduced me to another character; a witch, named Manon.

This powerful character leads the charge of Adarlan’s ariel forces. She jumps on the back of wyverns and is named wing leader for her bravery and complete savagery on the battlefield. In this world, witches are not these old withering ladies who make potions and ride on brooms. No, witches are stunning, beautiful women who eat humans.

Manon literally has iron teeth, sharp and pointed, on top of her white skin, bright yellow and orange eyes, long sharp iron nails and long white hair. She’s like a ghost, the one that would…you know…rip out your throat while you sleep.

I don’t know when she’ll meet Aelin, but I know when they do, they’ll become an unstoppable force of nature. Manon scares me, but I love her.

I can’t see what the next book, Queen of Shadows, has in store.

In this article:book review, Emma, heir of fire, Review, throne of glass