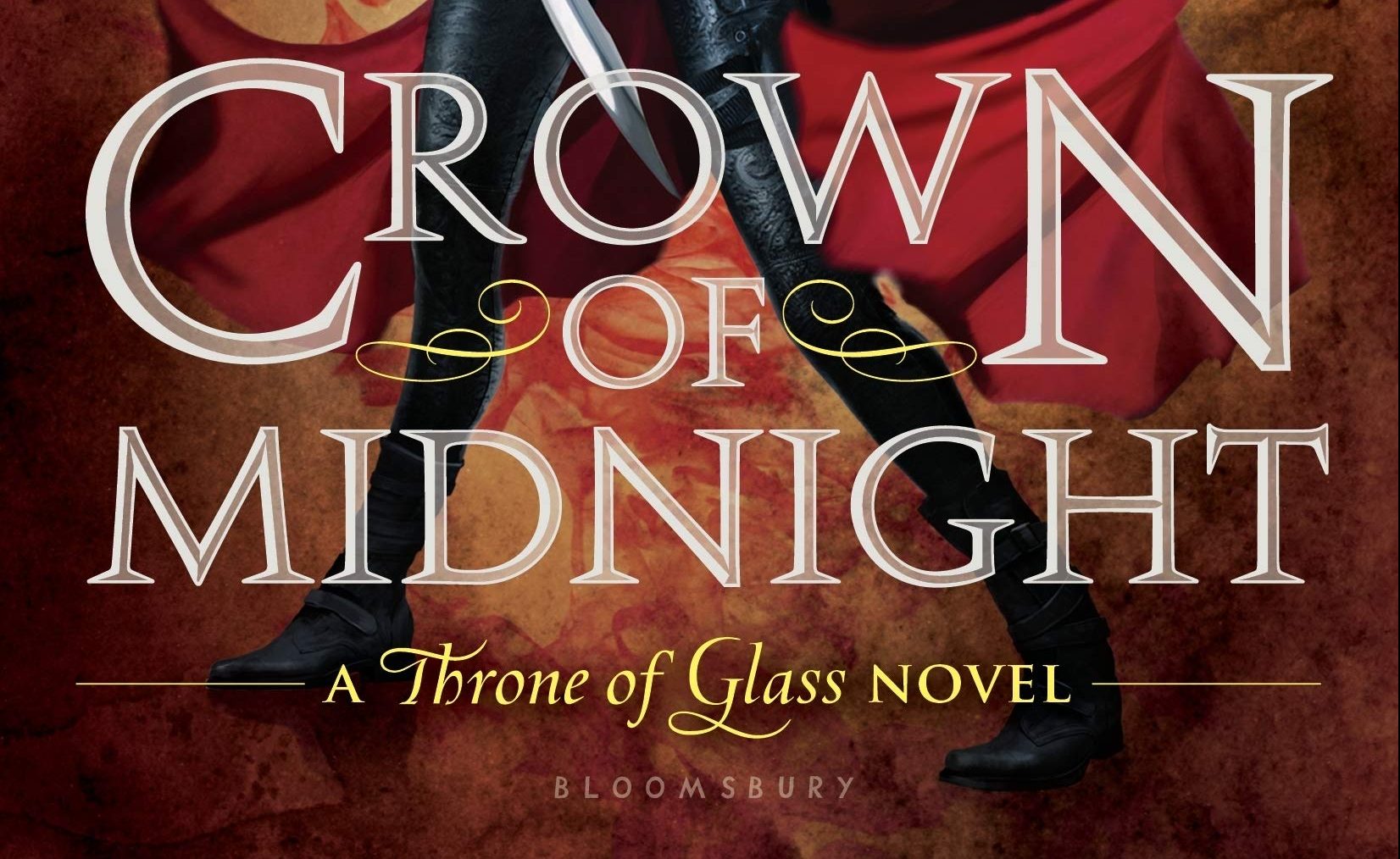 Almost two months after I read the first book of the Throne of Glass series, I was finally able to read the second book; Crown of Midnight. It wasn’t because I was holding off on reading it. I just simply was never able to put in the time to sit down and immerse myself in this fictional world.

Needless to say, I was pleasantly surprised.

Oh, and you’ve probably guessed, but Crown of Midnight spoilers are ahead. Tie back your hair into an assassin-like braid and focus your Ashryver eyes. We have a lot to discuss.

My favorite assassin is back, and swinging as she leaps from roof to roof, sinking into the shadows before she kills her victims, throwing their severed heads at the feet of the king she serves.

Before I go into this emotional ride of a book, I just want to say how much I live Celaena. Typically, most heroines in young adult books say that they aren’t beautiful or strong. Someone else has to help them down that journey to accept themselves, but Celaena…Celaena knows how freaking gorgeous she is, and is never ashamed of it. The power she holds, the swagger, the confidence, the strength that she embodies is something I don’t see often in Y.A. heroines.

The book starts off running as this young, fearless, flawless warrior swiftly dances in the dark, avoiding any eyes that may have seen her face. The first chapter ends with her raising a sword over the head of a sleeping man and his wife.

Hey, Siri, play, Another One Bites the Dust by Queen.

The next chapter she saunters in, with a bag strapped to her side, hitting her thigh as she walked. It only takes a moment for us readers to figure out what it is. Celaena pulls out the severed head of the target and tosses it at the king’s feet, in front of her past love interest, Dorian and her potential love interest, Chaol.

Yeah, sure Celaena. That oughta get their hearts racing, maybe not in the way you would like, but, it works all the same.

Disappointment laced my bones when I saw what she had done. I knew it was for her own survival; she had killed before. There had been many wonderfully descriptive scenes of the dead bodies Celaena killed or stumbled across in previous books but Celaena killed those who were doing horribly wrong things, just like in True Lies. She may have killed people, “But they were all bad.”

And yes, this book continues the gruesome dead body pattern. Maas does a wonderful job describing every immoral thing that was done to the victim. There is no doubt what happened to them–ever.

Killing for the king didn’t follow her pattern, so I sat here slightly confused as to why she was so willing to just kill whomever the king told her too, especially when everyone knew how horrible the king was.

It was only until the next chapter when I saw more darkness in her morally gray soul.

Celaena makes the king think she’s killed who he has asked. Celaena lets her tagrets escape with their lives if they vanish to the countryside and uses the rotting heads of the already dead to show the king her success. The heads are hardly recognizable, as Celaena says, “they don’t travel well.”

When I first found out she was doing this, I was thrilled and concerned all at once. She still had to serve the king for years to come to earn her freedom. In my head, I kept thinking, “there’s no way she can keep this up for that long,” especially since she was getting a target per month.

Yeah no. That definitely didn’t last long. The king had Celaena and her friends Chaol and Nehemia on a leash. If he were to find out about Celaena’s treason, he’d kill them both.

And personally, I didn’t want either to die.

Even though Chaol is the type of guy I would think is very handsome, but a little…opinionated…

I’ll leave that there.

I had a horrible feeling in my gut that Nehemia was going to be killed. Her voice was powerful, as she was the princess of Eyllwe, a rebel group that fought back against the king Celaena served. Nehemia was making a difference, changing people’s minds about the king they served. I knew she was going to be killed and as I got farther in, that feeling of dread sunk straight into my bones.

And I was right.

Nehemia, the light of Eyllwe, the strong, fierce young woman, who saved Celaena’s life multiple times over, who looked the king of Adarlan with daggers in her eyes as she fought him, over and over again to save her people. She sang the song of her people, even as the king murdered anyone who played the tune. She was unafraid, powerful, beautiful and smart. She was Celaena’s best friend, the only one she could trust.

But Nehemia was killed, body sprawled and mutilated in her own bedroom.

Excuse me while I go cry about this scene for the fifth time this week.

Even though her voice and presence was starting trouble for the king of Adarlan, Nehemia hadn’t been killed by the king, or any one of his advisors, lords, captains or soldiers. I thought Nehemia would have been killed by Roland Havilliard, Dorian’s cousin, who I never liked.

Nehemia was killed by someone named Archer, one of Celaena’s targets, who she had let live and tried to pull information out of.

Damn it Celaena. If you had just killed him then Nehemia wouldn’t be dead. Even though I knew Nehemia’s death was just around the corner, I was still really upset about it. I had to put the book down and run some errands to keep myself from chucking the book across the room.

On another note, I met a new character, and one that I will probably never see again after this book. His name is Mort and he’s a talking door handle.

As Gen-Z would say it; this door handle is a total mood. I will say though, I was getting annoyed with how vague he was putting things sometimes. If he had just told Celaena what the hell was going on, the book would be 50 pages tops. I was also cackling about the fact that Mort means death in french.

Oh! In other news, my cinnamon roll Dorian has magic! He doesn’t like it, of course, because his father outlawed magic, but Dorian has magic. I knew at the beginning of the book that he did, as Sarah J. Maas kept dropping descriptions of temperature changes and shadows. She completely revealed it when he punched a wall and the window next to it shattered.

I liked the book, even though it was a filler book, but it wasn’t my favorite. Still, out of the series so far, Assassin’s Blade is my favorite. Rest in peace Sam Cortland.

Speaking of which, Celaena and Chaol become a thing. Their romance, though, was short lived after his actions, after he didn’t tell Celaena what was going on with Nehemina, so then Celaena couldn’t save her friend. Yes, I’m aware he actually had no intention of hurting Nehemina, but seriously Chaol. How blind can you be?

Celaena, while I’m on the topic of blindness, Celaena, after over a year, still hasn’t figured out who betrayed her, who got her thrown in the salt mines in the first place.

Crown of Midnight was a ride, full of vivid descriptions all the way from glass castle, to the low-cut red dress Celaena wore when she went to dinner, to the mutilated remains of Nehiema’s corpse. The dialogue was fast, powerful when it needed to be, and calm when the chaos stilled. Celaena’s descriptive fighting, with a sword or a bow or a dagger made me want to scoot on over to amazon and buy a fantasy weapon myself.

The book only made me want to pull off a Celaena cosplay, more than ever. Maybe, one day, I will show up swinging with Celaena’s blonde hair and confidence, but first, I follow Celaena’s journey in her next book; Heir of Fire.

When I read this, I also filmed my reactions on my tiktok. I will say, the same friend who threatened my life if I didn’t read A Court of Thorns and Roses, got a kick out of my reactions to Crown of Midnight.

I’m excited to see what the rest of the series has in store.

Check out more geeky news on our Facebook page!

A drink by gamers, for gamers? Yes we know, there are 1138 various energy drink companies out there promising all sorts of miraculous things...