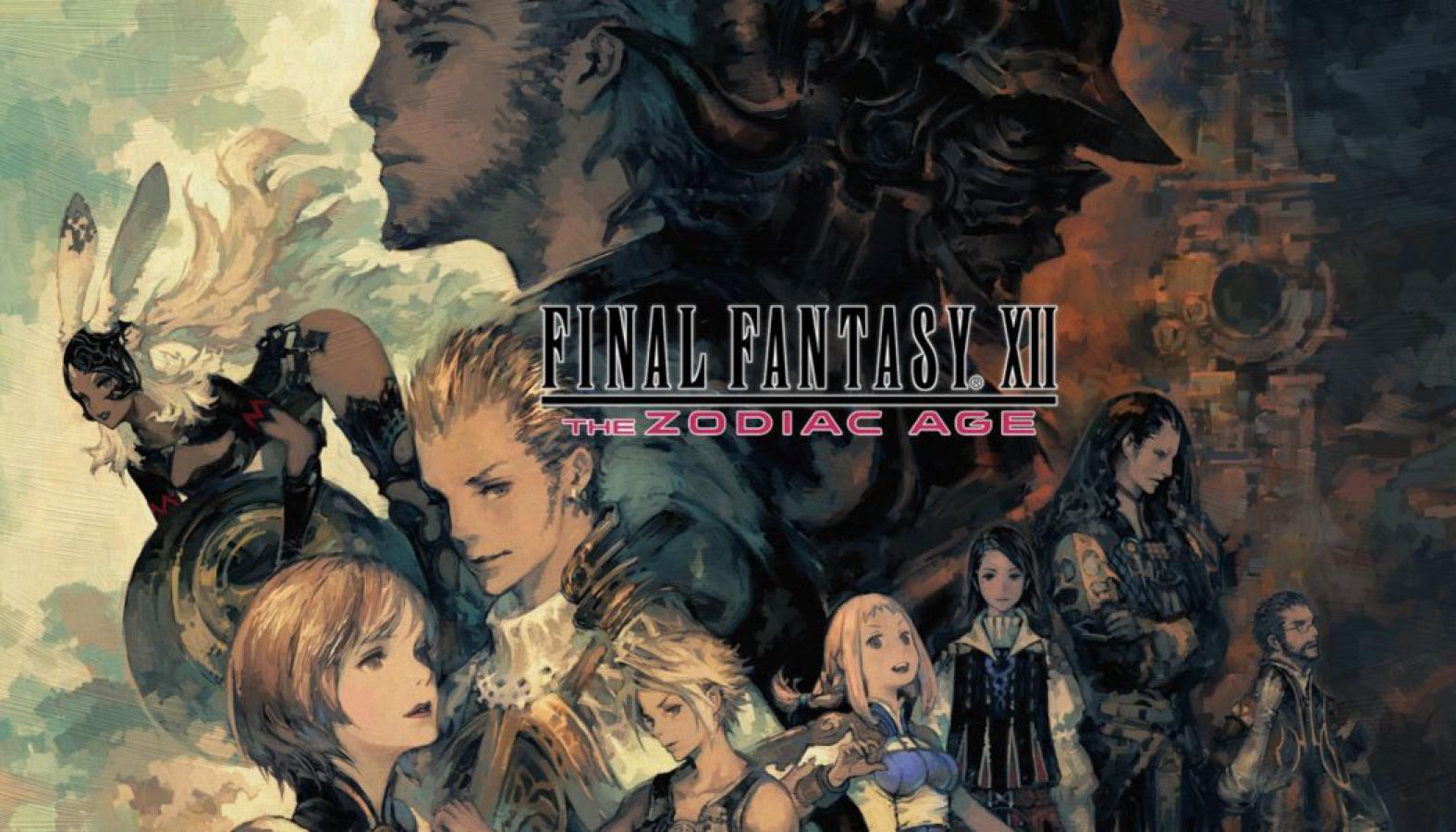 To all those naysayers I say “You couldn’t be more wrong!” Some say the voice over work and audio is muffled, to which I will acquiesce and say “fair point, I agree with that”, however the game’s music is up there with some of the best in the franchise! “The Crystal Theme”, “Battle With An Esper , and “The Salikawood” are some of the most beautiful tracks ever made for a game! Overall FF XII gets a bad rep for not being as anime-esque or flashy as some of the other titles, but I think that’s what makes it stand out on it’s own.

FF XII’s graphics are pretty much par for the course in terms of what the PlayStation 2 was doing at that time. At it’s release FF XII looked pretty enough compared to other PS2 games such as Dragon Quest VIII and Rogue Galaxy, although the cinematic cut scenes were definitely a notch above everything anyone else was doing. That said I don’t think FF XII gets enough credit for it’s unique art style. The game’s visual and artistic aesthetic is a mixture of European, Mediterranean, and Asian motifs.

So much of the dungeons have that “Western Europe” medieval feel with traditional brick and mortar designs. But then we get to the bazaar or any of the areas around the city of Rabanastre and there is a Mediterranean vibe.  The armor of the soldiers of the Archadian Empire have that European thick iron look, but then have a more middle-eastern embroidered pattern on the armor.

Archades, the capital city of the Archadian empire, has a beautiful skyline that sort of evokes an ancient metropolis combined with a futuristic old-space tech aesthetic. The game perfectly fuses these elements in a way no game has since.

There are other areas of the game such as The Great Crystal and the Golmore Jungle that stand out as uniquely beautiful areas of the game. Each of these areas adds it’s own twist to the living breathing world that is FF XII. The Giza plains are an area of the game, just outside of city of Rabanastre, that experience a rainy season and a dry season. Triggering the rainy season requires some in-game manipulation but when it happen the layout, scenery, and even types of enemies completely change.

The Great Crystal is one of the biggest dungeons in the game and is home to some of the tougher optional bosses in the game, but is a breath taking and scenic location. Your party fights their way through a tricky maze inside the heart of a massive ancient crystal teeming with magical mist.

The player’s group observes the Great Crystal from just right outside the massive crystalline shell.

FF XII is packed with secrets and content. There are over forty different monster hunts/bounties to do on the side. Several areas in the game that are large dungeons that you will never come across in the story alone! Super bosses who have millions of HP that make the game’s final boss look like a weakling. Secret weapons and gear that require the rarest and most obscure materials and poached monsters to craft! All of that plus the unnamed side-quests add so much to the game!

By far one of my favorite features of the game is it’s monster bestiary! It keep tracks of all the creatures you fight and gives you their lore and background stories. If you kill enough of any given monster you also get extra info about the rare loot they can drop! The journal entries and lore do so much world building that it makes Ivalice feel like an old and lived in world.

The Bestiary entry for the Behemoth, one of the classic Final Fantasy monsters.

FF XII is unique in the franchise in that there is a combat system in place that is supposed to take the task of micromanaging your AI companions away so you can focus on the character you are using. The is called the Gambit system. What the Gambit system does is organize the actions your AI-controlled party members take by putting them in order or priority.

You can set up so that if anyone in the party’s health drops below 40% they will stop what they are doing and heal, and then go back to attacking. You can also make it so your party members always attack the enemy that you are attacking, or so that they target every other enemy before yours. The system is a bit cumbersome and requires tweaking and management, but once you got it locked down to an exact science it works exactly as designed.

The party takes on a powerful Shield Wyrm. Image from Nova Crystalis

The comparisons between FF XII and Star Wars are many and very blatant. Vaan is very much Luke Skywalker, an orphaned boy who yearns to leave his home to travel and see rare new sights. Balthier and Fran are the sky pirate smugglers who fly the skies of Ivalice in their signature ship, The Strahl, very much like Han Solo and Chewbacca explore the galaxy in the Millenlium Falcon.

Princess Ashe leads a rebellion against the Archadian empire as a very competent and inspirational leader much like Princess Leia leads within the Rebel Alliance. Both groups have high ranking familial connections to the antagonistic empires, with Vader and Luke being much like the rebel captain Basch and his high ranking traitorous brother Gabranth who serves within the Archadian empire. There is a Lando-like character in XII, Marquis Ondore, who also governs from a floating city in the sky. What happened is that FF XII actually takes a lot of inspiration from the Akira Kurosawa film, The Hidden Fortress, which similarly heavily inspired George Lucas’s Star Wars.

With all of that said the plot of FF XII is easily one of my favorites of the franchise as a whole. The warring empires of Rozzaria and Archadia sit on opposite ends of a continent, with the independent state of Dalmasca sitting right in the middle of them. The Archadian empire annexes and occupies Dalmasca after the king is killed by one of his knights (later to be revealed Basch’s twin brother, and Judge Magister of the Archadian empire, Gabranth). Thereafter the rag tag band made up of the war orphans Vaan and Penelo, the sky pirate treasure hunters Balthier and Fran, the disgraced and framed knight Basch, and the figutive princess of Dalmasca, Ashe, set out to prevent a greater conflict between the empires and, ultimately, free Dalmasca from occupation.

The map of the game’s main regions. Image from Tor.com

The game’s theme is basically about freedom, and we see this in multiple ways from our various characters on both sides. Vaan yearns for the freedom to be a sky pirate, to travel and literally be free of the ground itself. To Vaan being able to fly an airship represents not just freedom tot ravel but also freedom from his personal baggage and responsibilities in Rabanastre. Balthier seeks freedom from his legacy, as he has forsaken his real name to distance himself from his mad scientist father, Dr. Cid,  and his Archadian connection which he deeply loathes.

Fran wishes for the freedom to return home, where she was exiled from long ago for becoming worldly and choosing to live a lifestyle far from her home village. Basch seeks to defend his new home of Dalamsca, but also to free himself of false charges and clear his name, to expose his brother as the one who killed Ashe’s father, the King of Dalmasca. Ashe seeks her kingdom’s freedom at a basic level, but also seeks to be free of her unresolved grief over the death of her husband and father.

Even the main antagonist of the game, Emperor Vayne Solidor, seeks freedom in a sense. He seeks freedom from the manipulations of the Gods of Ivalice, who favor Ashe as the new ruler of Ivalice, her inherited title of Dynast-King. Vayne hungers for the power he needs to sever the chains of fate and to defy destiny to forge a new future for the Archadian empire.

the world of FF XII is one of my favorites in the franchise and honestly I think the game gets a bad rep for it’s voice acting and lack of a strong-anime-over-the-top protagonist much like FF VII, VIII, and X have. XII has a beautiful art style, noble characters with actual growth over the course of the game. It has clever writing and dialogue, especially from Balthier, and has some of the most customizable and fluid combat in the series.

The aesthetic and most of the music is beautiful and really represents the diverse species and real-world influences in the game. Is it my favorite in the series? no. But definitely top five. “The Zodiac Age” version of the game improves the game’s visuals as well as offers a few gameplay tweaks and is the version of the game I recommend by far. Go ahead, give it a shot, you might just be pleasantly surprised to find just how good XII really is.

Enjoyed this review of Final Fantasy XII? Do you prefer other Final Fantasy games instead? Comment below.  perhaps you enjoy some of our other content here on GNN? IF so make sure to subscribe to our website since you’re already here.