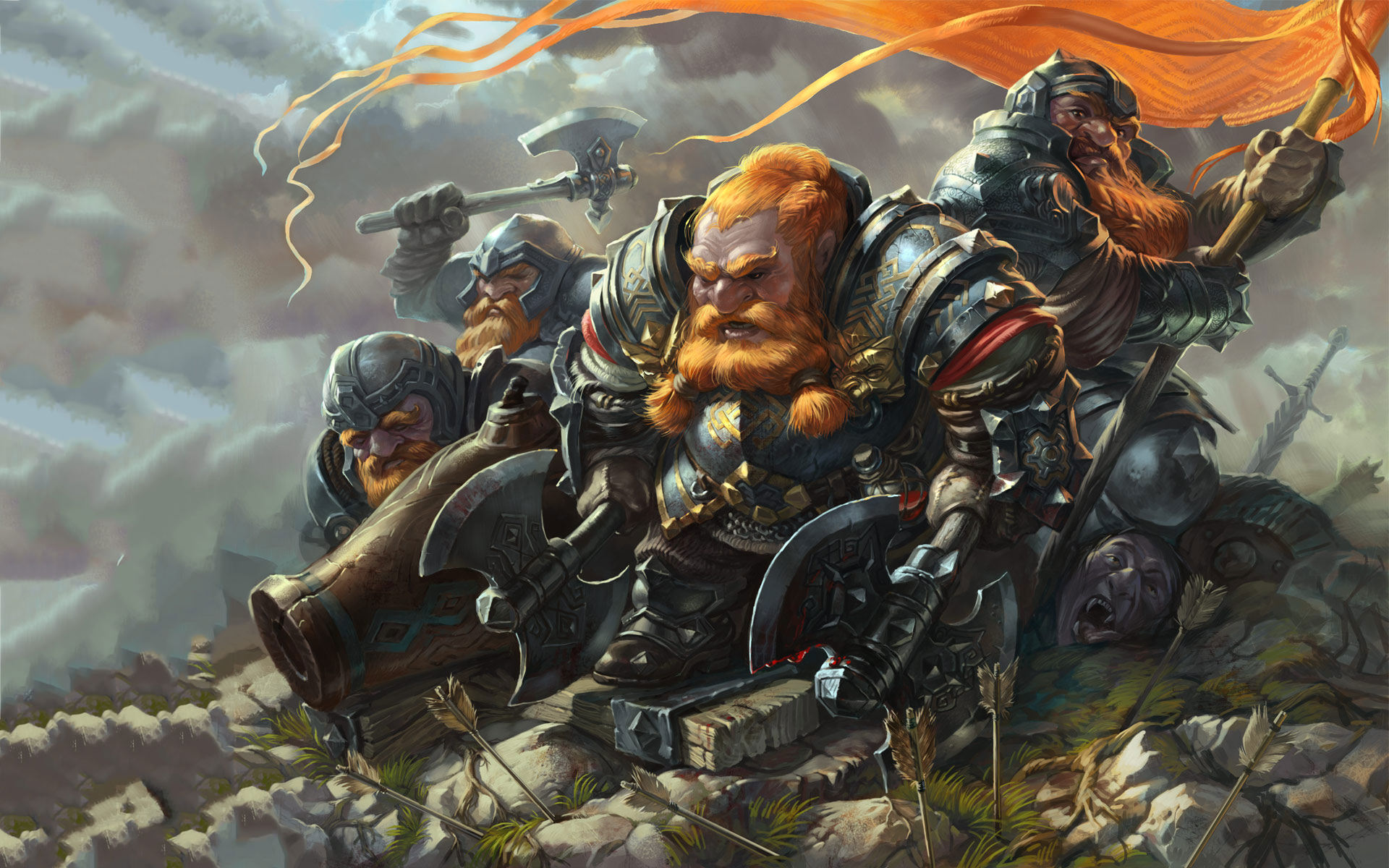 Looking into the races of Dungeons and Dragons, one of the most versatile in my opinion is that of the Dwarves. The “Player’s Handbook” can give you a lot of ideas and back stories, history, and facts about the Dwarves of D&D. Here I want to hit on a few highlights to peak your interest as we create our characters.

Dwarves by nature are stout, strong, hardy people. Much of Dungeons and Dragons draws inspiration from the writings of J.R.R. Tolkien’s “The Lord of the Rings”. Think about what you imagine a dwarf would look like or what you have seen in pop culture. Is your dwarf taller than most? What does your dwarf do as a trade when among his own people? Any scars or stories of battle?

The traditional history of the Dwarves depicts them as living under the Mountains as artisans and craftsman of the earth and stone. Many people play Dwarves that have a background in mining for gold or gemstones. Some play Dwarves that are powerful warriors and protectors. Some blacksmiths, others rogues and thieves. Some are holy men, Clerics, who worship the god(s) of old. Maybe your Dwarf was banished to the surface, or chose to live among the common folk to sell and trade his/her wares.

How you play your Dwarf is entirely up to you, but the “Player’s Handbook” lays out two different subsets of Dwarf: the Mountain Dwarf and the Hill Dwarf. Both have their own abilities, and gain special bonuses based upon which one you choose. I have made the below chart to help you see the balances and benefits of both.

For all of the deep specifics I would recommend reading the section on Dwarves in the “Player’s Handbook”. I want this article to serve as a way to help you determine if the Dwarven race is right for your player.

Being Dwarven comes with a lot of perks and benefits. You are powerful and strong, capable of wielding large, heavy weapons. Ideal Classes for Dwarves are FIGHTER, BARBARIAN, CLERIC, MONK, PALADIN, and ROGUE. Basically anything that thrives on smashing and using strength. Historically Dwarves are no spell casters. Maybe yours can break the mold?

A player in the current game I am running is Mountain Dwarf Barbarian. He is a hero among his own people, carrying the scars of battle proudly on his chest. He came to the surface to bring honor and strength to his clan. Clad in Iron and leather armor he carries a large two-handed Great Axe with some javelins slung across his back. His rage in battle has been known to eviscerate Kobolds and behead Dragons. He is the most interesting Dwarf in the word, he is Vandal Brawnanvil.

Original artwork by me, Devin Stewart, of Vandal Brawnanvil

Next week’s Dungeon Crawl will look at the majestic Elves so be sure to stay tuned to Geek News Now for more awesome articles, contest and giveaways, video podcasts, and more great content. Leave a comment below if you have ever played a Dwarf and tell us all what their story was.

In this article:D&D, dungeons and dragons, Dwarves, Tabletop RPGs, Wizards of the coast