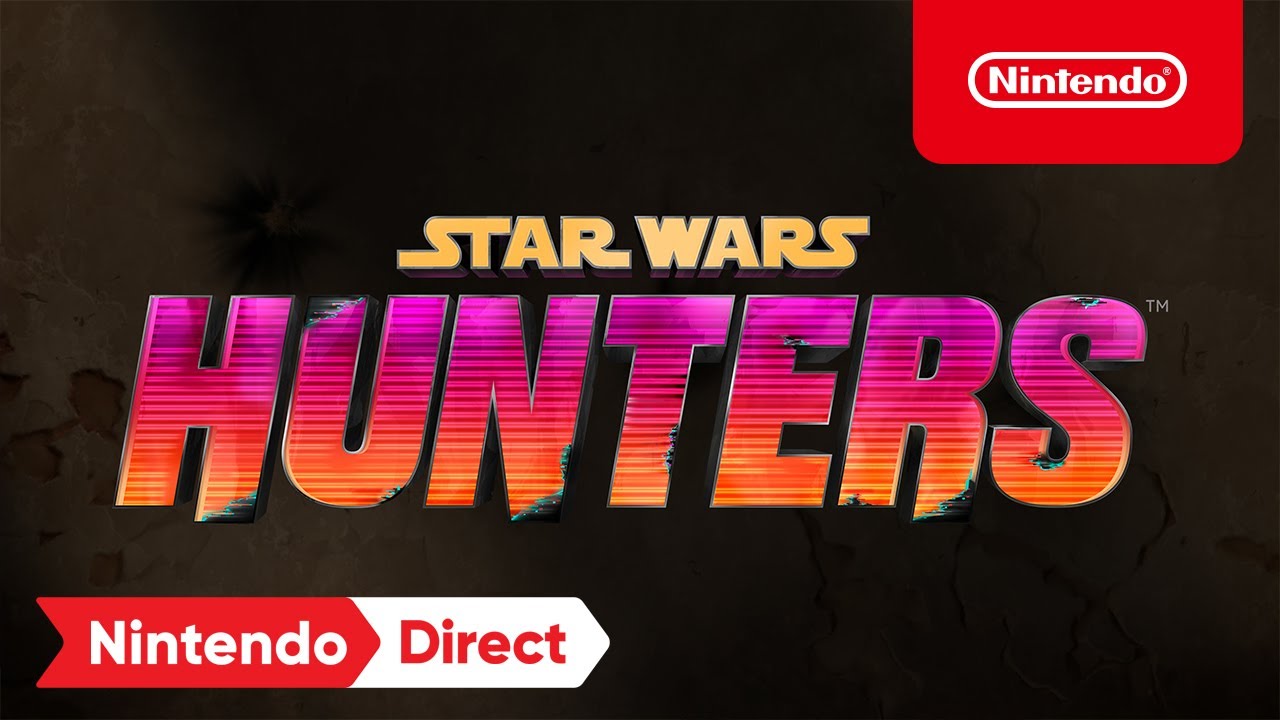 Bounty Hunters, Wookiees, Storm Troopers, Dark Jedi (?), and more are headed for the Switch later this year in “Star Wars: Hunters“. Announced earlier today during Nintendo’s Direct presentation, Star Wars: Hunters is being developed by Zynga in conjunction with LucasFilm Games. Slated for 2021, not much was revealed from the game’s short trailer. We saw what looked like a shabby lobby-area of a possible colosseum that had a close resemblance to Jabba’s palace on Tatooine. It’s covered in graffiti and looks a bit decrepit.

The camera swoops forward and shows us a hologram of a woman clad in black and red armor performing a flourish with her red lightsaber. Then we see a hologram stormtrooper unloading with a gatling laser weapon. Followed by what appears to be a mandalorian twirling dual pistols, and lastly a roaring wookiee with dual-axes. After scrolling past that we see a massive door lift up and treat us to an exchange of blaster fire in a cloud of dust!

according to the blog post on StarWars.com about the game: “Star Wars: Hunters will bring players together to engage in thrilling, team-based, multiplayer battles featuring a diverse array of distinctive new Star Wars characters. Set after the fall of the Galactic Empire, Star Wars: Hunters will connect players in real time to battle in arena settings inspired by iconic Star Wars locales.”

Taken directly from the same blog/article posted by StarWars.com, Vice President of Lucasfilm Games, Douglas Riley, had this to say about the announced game:

“Star Wars: Hunters draws inspiration from classic Star Wars stories and settings, but with a look and feel that is different from anything we have done before. We’re thrilled to introduce this wildly creative cast of characters to our fans on Nintendo Switch, where they can join with their friends in thrilling battles at home or on the go.”

While the game is announced for the Switch, the trailer also shows that it is coming to Apple’s App Store and the Google Play Store as well. Given the fact that LucasFilm Games has stressed that the announced online game will be free to play and download it is almost a guarantee the game will have micro-transactions. Historically the Star Wars brand has had success in the free-to-play space on mobile.

Recently it was reported that Star Wars: Galaxy of Heroes, a collectable RPG that is free-to-play on mobile and developed by Electronic Arts, has generated over $1,200,000,000 in revenue! With such success it only makes perfect sense for LucasFilm Games to look at expanding in the mobile space. From the description about it being team-based, played in real-time, and set in a “battle arena”, it seems like this could very well be a battle royale style game. We’ll have to wait and see for more to be revealed in the future.

Looking forward to this new game? Apprehensive about the game’s financial model, or just glad that it has nothing to do with EA? comment your thoughts below. If you are itching for even more new Star Wars content then check out our coverage of the newly announced comic mini-series “War Of The Bounty Hunters”.

For more articles about the latest in all things Star Wars and gaming, subscribe to our website. Don’t forget to follow our socials: Our Facebook is here and Twitter is here. Also check out our contest we are running on the GNN Greats Facebook page (make sure to check the rules and requirements). We are giving away a Marvel Prize pack worth $250 including a Thanos Statue and more! But hurry, contest ends February 28th!