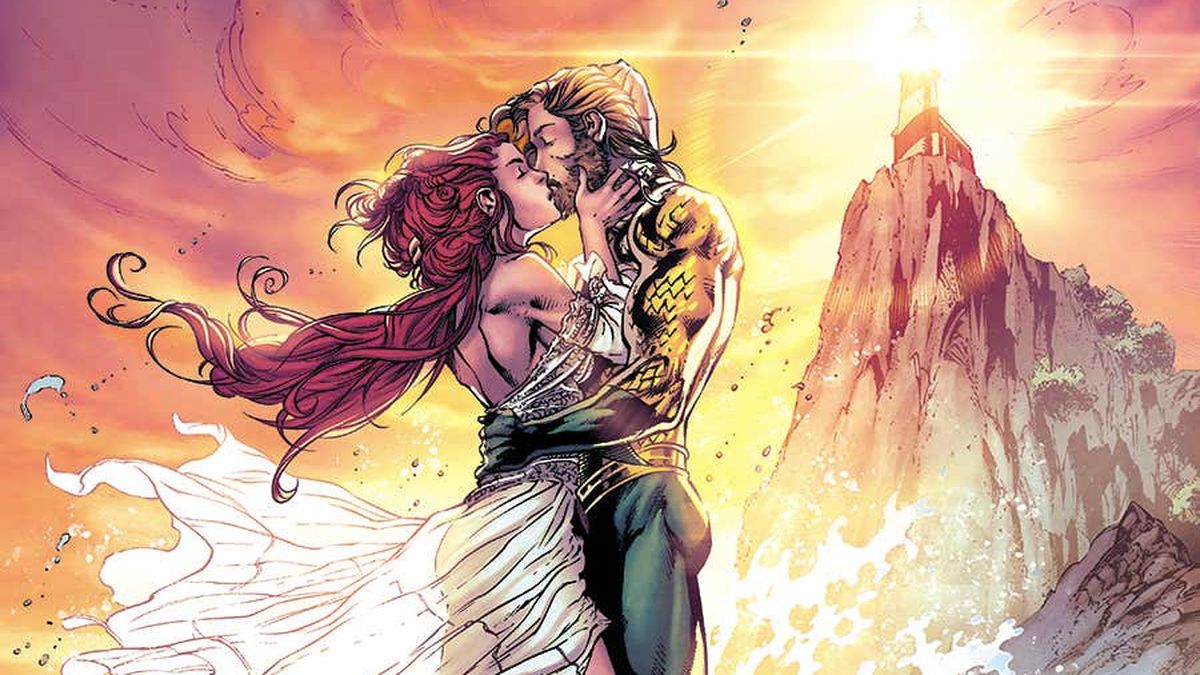 Aquaman and Mera Kiss. From polygon.com

You’re invited to the wedding event of the season and it’s on the racks of the nearest comic book store now! Not only are you invited, but also all of your favorite superheroes and supervillains! These oversized issues celebrate the greatest relationships in all of comic books from Spider-Man and Mary Jane to Lois and Superman. This valentine season, I wanted to go back and cover some of the momentous weddings to permeate the comic book world.

Aquaman and Mera, I Do. From womenwriteaboutcomics.com

One of the first marriage ceremonies actually to occur on the comic book page is Aquaman and Mera. This couple became the rulers of Atlantis and created one of the greatest partnerships in comics. Through Aquaman’s brute strength or Mera’s Atlantean magic, these two have worked together for so long and well they have transcended the page to make appearances in the Justice League cartoon and the Aquaman movie.

A Marriage Sealing Kiss. From womenwriteaboutcomics.com

For the First Family of Marvel Comics, it was only a matter of time before their greatest couple tied the knot. After three years of publication, they did just that. Since then, they have become one of the most iconic couples of all time. Both of them grow through their partnership as Sue Storm becomes confident as a leader and Reed doesn’t get lost in the science. They truly stand as equals and that leads to a stronger relationship as they work together with the other members of the Fantastic Four.

Storm and Black Panther in Love. From syfy.com

Every king needs his queen, and Black Panther found his queen in the form of the mutant, Storm. They were married during the Civil War storyline in the mid 2000’s where tensions were high between Iron Man and Captain America. Although their wedding may have been overshadowed by the events of Civil War, it still led to Storm becoming a leader in Wakanda and a partner for Black Panther. These two characters had known each other since they were kids, their first loves, and they were together for six years before cosmic events tore them apart.

Superman and Lois Lane is, quite frankly, the most iconic partnership in all of comic books on par with Batman and Robin. These two have been circling each other for years as Lois tried to uncover Superman’s secret while Clark Kent worked next to her every day. Finally, in the 90’s, the pair decided it was time to get married and became husband and wife. It marked a change in Superman so powerful that when it was wiped from existence in the New 52 there was an outcry. Luckily, the publisher listened and brought back the original Superman and Lois Lane as well as their son Jonathan, creating some of the best Superman stories where we see the Last Son of Krypton as a husband and a father.

Apollo and Midnighter Kiss. From womenwriteaboutcomics.com

Apollo and Midnighter are a couple who are not as well known as most of the ones on this list. Their wedding in 2001 was a modest affair, but it was the first time we saw a LGBTQ+ marriage. It was an understated affair, very much a product of its time, but it blazed a trail for more LGBTQ+ representation in comics. They would go on to adopt a daughter and raise her while continuing to deliver on the ultra-violence and gore that the Authority series has promised.

Spider-Man and Mary Jane in Wedding Bliss. From ScreenRant.com

“Fact it, Tiger. You just hit the jackpot.” From that moment, Peter Parker embarked on the greatest relationship in his life with the girl of his dreams, Mary Jane Watson. As a man who had a bit of Parker luck and would always have things go wrong, Mary Jane was the one thing that went right.The fact that Marvel erased their marriage will remain in infamy. A bid to bring Spider-Man to a traditional status quo ended one of the best things about Spider-Man. They would come back in a miniseries to remind us why Mary Jane is the woman for Peter.

Superhero weddings are grand events in comics where anything can happen. It’s a reminder that a superhero is more than a cape and they have relationships that help them to grow. It also doesn’t hurt that they try to cram in every hero or villain they can think of to make the day more complicated and bombastic.

What’s your favorite superhero wedding? Let us know in the comments!