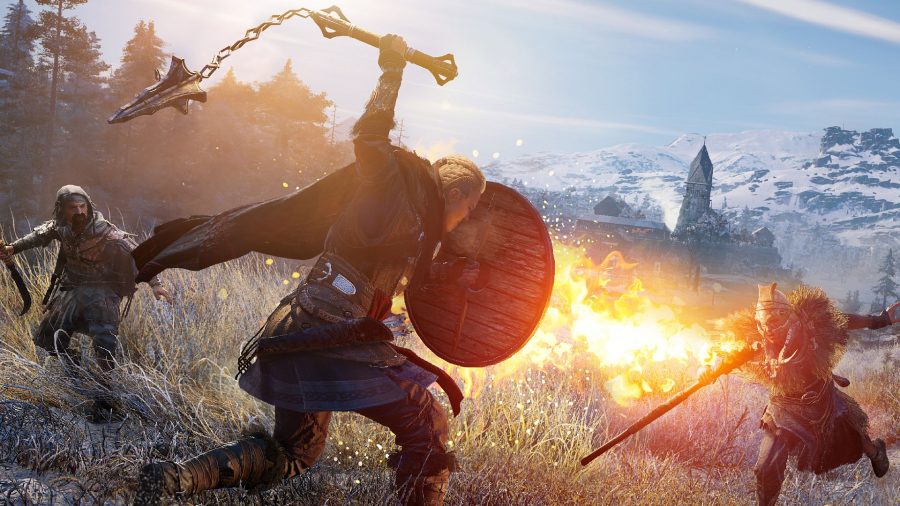 AC Valhalla has more to offer than just decapitations, skull-splitting, and dismemberment, it also has minigames. Minigames are a hallmark of many open-world videogames and serve as a way of further immersing us into the game’s world. So it is no surprise that Assassin’s Creed Valhalla comes with several including Orlog (a dice game played at pubs and social areas that is getting it’s own real life physical game) and fishing (a minigame staple across videogames as a whole). But after a day of hunting down members of the Ancient Order and pillaging churches my favorite side activity in AC Valhalla is it’s optional rap battles.

That is to say, more precisely, flyting.

AC Valhalla has so many assassinations, collectables, side-quests, and daily missions it can be daunting. The best way to unwind is with some beer and some competitive boasting. Flyting is, essentially, an exchange of insults between two people using clever prose and verse. That’s right, it is ancient freestyle rap battles! The crowds typically choose the winner by their responses to each participants delivery.

Fortunately flyting is more than just a simple distraction, it’s a way of life for many in the game’s world. Some of the more amusing flyting challenges involve: a monk who has taken a vow of silence, a man who will flyt only if he is drunk, and a romantic Casanova. It’s a nice change of pace from the more traditional minigames that helps set Valhalla apart from the rest of the series.

Flyting is also the only way the player can improve Eivor’s charisma level. Charisma comes into play in various situations where Eivor may have to either bribe or fight another individual. Occasionally, if Eivor has a sufficient charisma level, he/she can simply talk their way out of an anxious situation. So besides being fun it definitely pays to take on as many Flyting challenges as possible when they come across Eivor’s way. However Flyting isn’t just a fun game mechanic, it is rooted in surprisingly authentic history.

Eivor (female) considers the options for firing back. Image from Eurogamer.net

Flyting is an actual type of verbal contest that goes as far back as the epic of Beowulf (written between 700 and 1000 CE). Historically, flyting was sometimes performed for fun or even as an alternative to combat. In retrospect it kind of makes sense that flyting has existed for so long as humans have been speaking for thousands of years. It was only a matter of time before people eventually started rhyming and begin using it to insult each other. It’s also prominent in the old Norse poem, Lokasenna, where the god Loki has a quarrel with the other gods using flyting.

In more recent years we have seen modern interpretations of flyting in freestyle rap battles in media. The film, 8 Mile, revolves completely around freestyle battles and the culture that surrounds them. The TV show, Wild ‘n Out, is an improv comedy show that typically ends with a freestyle battle between teams being judged on delivering the best punchline at the expense of their opponent and has been airing for over 14 years.

On YouTube the popular channel, ERB (Epic Rap Battles of History), showcases fictional freestyle battles between two historical or fictional figures and has over 14,000,000 subscribers! Some of these Rap Battles include:

Suffice it to say, people love to see battles of wit and rhyme regardless of the century! Ubisoft always takes painstaking care to include as much historical care as possible with the AC games. I raise a horn of ale to Odin for bringing this rhythmic touch to Valhalla.

For more articles about gaming news, opinions on gaming, and other geeky interests be sure to subscribe to our news page.  You should also follow us on social media. Our Facebook page is here and our Twitter is here.

As reported by ComicBook, Netflix today announced a new live-action series based on the popular gaming franchise Assassin’s Creed from Ubisoft. In addition to...