Dracotok: The Best Tiktok Trend of 2020 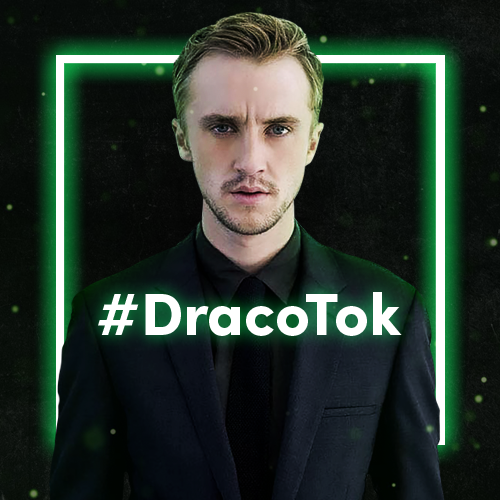 I thought my Harry Potter phase had subsided long ago, but it resurfaced, like a freaking chest-buster and it wasn’t because of reading the books or watching the movies again.

It was because of Dracotok.

There are trends on tiktok all the time. They’re usually dances and the use of certain sounds, but dracotok was all about Harry Potter. People in mass numbers expressed their opinions on certain characters or talked about certain houses. However, the sparkling gem of dractok was filming fanfiction of yourself in the Wizarding world.

Yes. Fanfiction of yourself.

Before I continue, FanFiction is a fictional story written by fans of a particular universe and that include the characters, scenarios and worlds of that universe.

I don’t know who started it, or who figured out how to edit clips of videos and movies in their point of view tiktoks, but I blame them for my recent three month Harry Potter geek out. The trend surfaced during lockdown, when people were at home and had some extra time.

I had never seen Harry Potter used in this way. Of course there are hundreds of fanfictions(just download Wattpad), but I had never seen hundreds of people edit themselves in Harry Potter clips and interacting with characters through a screen. Dracotok also started other branches of POV geek outs. There are plenty of Star Wars, Marvel, Percy Jackson, and Lord of the Rings POV’s to go around.

POVs(Point of View) are already popular on tiktok. It allows people to create stories and act them out so that they can share them. It’s super fun to do. I’ve done a few, and have loved messing around with sounds and filters to tell a story. Dracotok was just that, but people create stories in the universes we hold dear to us.

I blame Dracotok for my purchase of Harry Potter robes and Ravenclaw merch. Quarantine only channeled my inner nerd tenfold, simply because of what I saw on tiktok. I was stuck at home and found myself on social media a lot more. I would see these creators and watch their videos. In one minute, someone could make me cry or laugh with the story they made.

It’s amazing how we can love characters so much, how we can mourn and cry and fight for them when they are killed off or ruined. It’s amazing how badly we just want to be in that universe, to escape. Dracotok was a trend that allowed every geeky Gen-Z to get lost in their favorite worlds and express their creativity while stuck at home.

Dracotok not only set off a chain of POV’s, but it gave many geeky people a platform to talk about the Harry Potter universe, as well as their opinions on certain characters. You should have seen the arguments over if Snape or Draco deserved a redemption arc. Those were some of the most passionate fights I had ever seen in a comment section.

Being a Slytherin also became a trend because of Dracotok. Although many people who were actually in Slytherin were annoyed with those who just wanted to be in Slytherin because of the attractive blonde, I saw it as a good thing. Slytherin was always considered the “Bad house” or “evil house.” This trend showcased that Slytherin isn’t a bad house. It simply has a bad reputation.

Even shifting, the practice of moving your consciousness into an alternate reality, like the world of Harry Potter, became a trend. Yes. This is very much a thing. There are entire communities, one of the largest being on tktok that are able to transfer their consciousness

into an alternate. There are infinite universes. Shifting is the practicing of shifting your consciousness into the reality of you choosing. People make or write down events, friendships and relationships they want to happen in their desired reality. People can even change their appearance, habits and talents.

Yes, like I said. This is very much a thing. There is even scientific evidence to back this practice up. I had no idea this even existed until dractok.

Have I tried it yet? Yes. I haven’t been very successful, but there are many people who say they have. Just look up “shifting” on tiktok. There are so many stories, shifting methods and ideas.

I mean, who wouldn’t want to be a part of their favorite worlds?

And although Dracotok has died down, I still find plenty of content creators put out there. Some of these Harry Potter creators gained so many followers that they started making money off of their content. Imagine getting paid to create fan fiction. That’s what this trend allowed them to do!

There were so many trends this year, but the geeky Dracotok trend will always be my favorite.

And the best one yet.