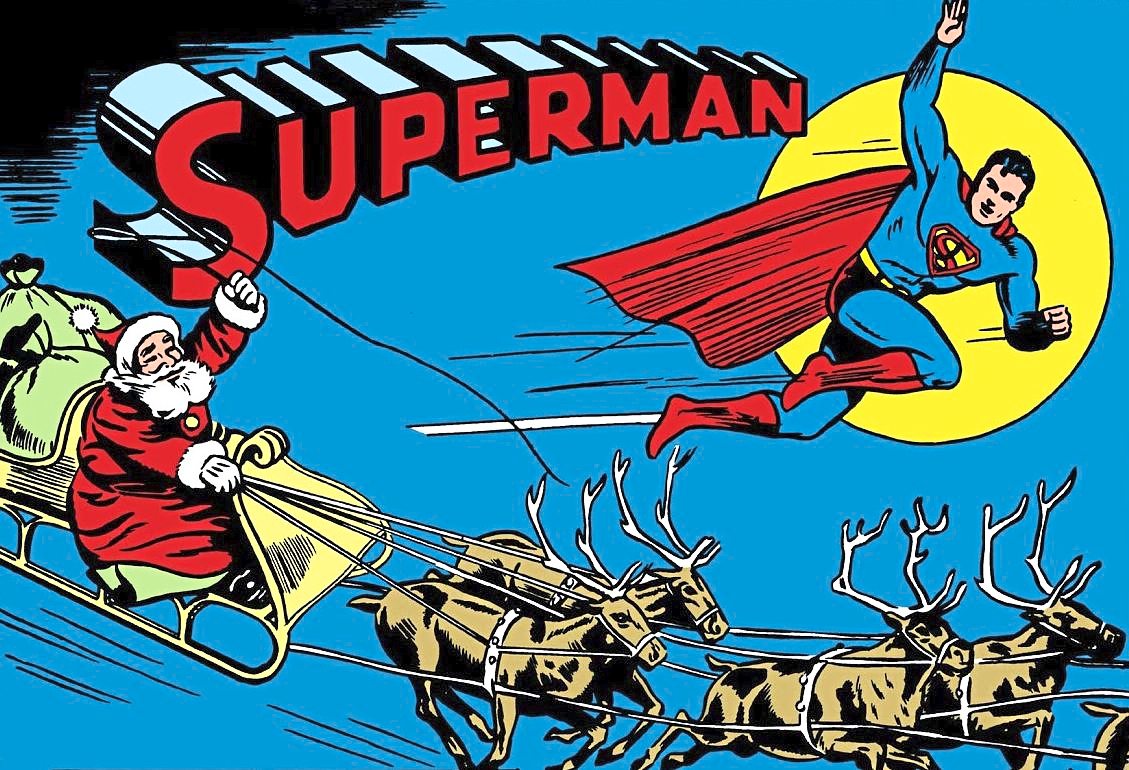 Christmas and Superman… I can think of five instances in comics and on-screen where Superman held some influence in some form at Christmas! All of them touch on the color and lessons we think about at this time of year.

Superman arrives at the North Pole to save Santa and Christmas! Picture credit to markvoger.com

The Daily Planet establishes a toy repair and redistribution effort, but villains Dr. Grouch and Mr. Meaney endeavor to wreck the whole thing! Superman stops them; they then take their plot one step further to the North Pole via spacecraft, trying to sabotage Santa’s operation! They even kidnap Lois Lane (go figure) and tie her to a rocket! Meanwhile, Superman meets spoiled boy James Daniels and teaches him a lesson by showing him what life is like for a poor child named Billy Connelly whom Clark Kent encountered while on assignment.

By the end of the comic, James and Dr. Grouch and Mr. Meaney learn their lesson and decide it’s better to give than to receive. This tale is campy, it’s bananas… but it’s fun!

In this Season Two episode of Lois & Clark: The New Adventures of Superman (1993-1997), we find a story of Christmas misadventure!

Bitter toy-maker Mr. Schott creates rat toys which discharge a gas causing people to behave childishly. This gas hits Clark, and it gets silly as we see Clark’s parents have to correct his bratty behavior. Meanwhile, Lois Lane is rediscovering her Christmas spirit — looking for something real and not superficial. In the end, Schott sees the error of his ways and all is made right in time for Christmas.

It’s goofy, but ripe with holiday cheer. Also, this was before the Tickle Me Elmo and Buzz Lightyear toy crazes; seeing the people go nuts for the dumb Atomic Space Rat toy in this episode just takes me back all the same.

In the Season Five episode of Smallville (2001-2011), two Christmas tales take place: one involves Clark Kent helping his friend Chloe Sullivan deliver toys to kids on Christmas Eve, and the other involves Lex Luthor living out a fantasy in an alternate reality after having been shot.

Both stories are fun and well-told; Clark’s is what you would expect as he does his good guy act; though he does wind up talking down a suicidal “Santa” — who may or may not be the real deal — into the Christmas spirit.

The real story, however, is Lex in his alternate reality: here, he is no longer a billionaire businessman, but rather a simple man living a simple life in Smallville with a loving wife — Lana Lang — and a son and another child on the way. He is a pillar of the community known for his generosity; respected and loved by his peers for being a good man… and then his world comes crashing down when Lana takes a turn for the worse and dies in childbirth while Lex begs his father Lionel to spare his wealth to save her and is refused. Upon his return to reality, Lex concludes the only way to save what you love is money and power.

A personal favorite! In “Superman” (vol. 2) Issue #64, Christmas is met by Superman in an amazing way. It’s about Superman answering fan-mail on December 23rd, giving help where he can.

It’s hard for the Man of Steel because he can’t answer or help *everyone*; also some of the people he helps come with difficult situations; such as a request from a boy asking Superman to save the boy’s dad from a brain tumor… which Superman cannot do.

Some good happens as well: Superman helps reunite two sisters who survived Auschwitz and were separated for so many years. Also, he brings Christmas cheer to children with a Santa and presents. Christmas spirit prevails in this issue!

In this Justice League (2001-2004) Season Two episode, Martian Manhunter (J’onn Jones) is invited by Superman to spend Christmas at the Kent farm in Smallville, Kansas. While in town, he silently partakes in some Christmas cheer; including listening to a church choir singing “It Came Upon A Midnight Clear”.

It’s in the “Christmas in Smallville” portion of the episode that the Martian discovers something truly meaningful. The town and the Kents are usually understood as what made Superman/Clark Kent the man he is through years of home-grown values; couple that with the welcoming Christmas spirit of a small town and it’s no wonder J’onn finds it in his heart to sing a song of joy at the end.