"This is The Way!" Nerf To Sell Replica Mandalorian Blaster! 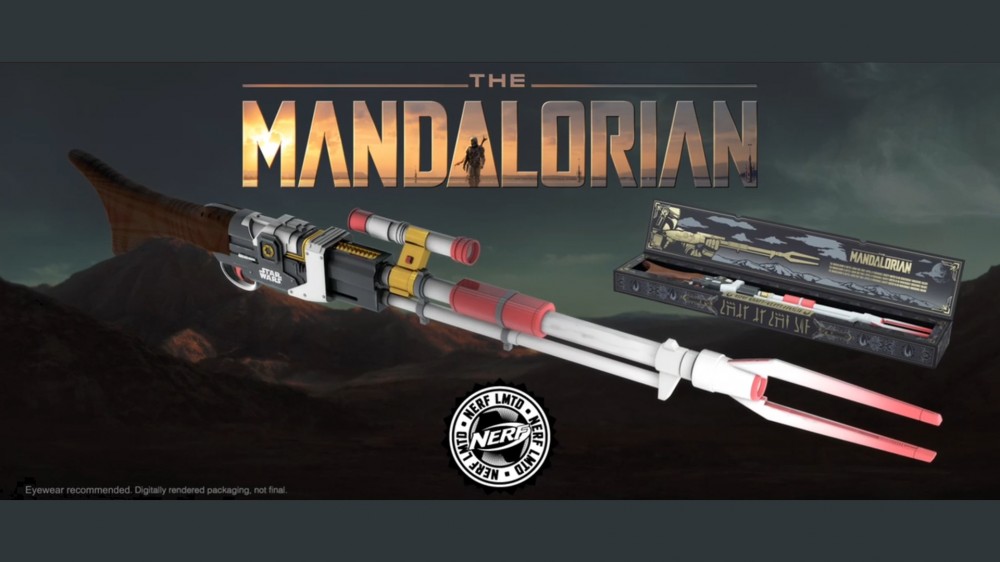 Ready to go hunting down that next bounty in a galaxy far, far away? You absolutely can’t do that without Nerf’s new replica of a certain bounty hunter’s Amban Phase-pulse blaster from hit Disney+ series The Mandalorian (2019-present)!

A detailed look at the Nerf model of the Amban Phase-pulse blaster! Picture credit to ruetir.com

As you and the younglings run and gun in your dangerous quests with this blaster, expect to play with “accurate sounds” like four blaster and four charging sound effects. It takes two AAA batteries.

The toy is pretty big as Nerf guns go, too! It measures over four feet (50.25inches) in length… Imagine most any small kid fan of the show trying to wield this thing!

The Mandalorian reloads his blaster rifle; similar to how the Nerf model will reload! Picture credit to reddit.com

And it loads your average Nerf Elite darts in the same manner as The Mandalorian by cramming a fresh “cartridge” into the pop-up breach. Just push the white handle underneath the scope forward, and you’re ready to reload!

This may not make it the most effective Nerf weapon in fun little skirmishes; but most of Hasbro’s recent licensed tie-ins aren’t the best at blasting; they’re simply cool toys with an added foam surprise. Nerf’s Halo MA40 Assault Rifle, the Rogue One (2016) Jyn Erso Deluxe Blaster, and the hard-to-find Episode VII (2015) First Order Stormtrooper Deluxe Blaster are rare exceptions to the rule.

The Amban Phase-pulse blaster as made by Nerf! Picture credit to theverge.com

I’m more of a lightsabers kind of Star Wars weaponry fan; but even I have to admit that this looks pretty epic! If I felt so inclined to go Mando-style in a Nerf battle with friends, I’d definitely consider getting this toy for my arsenal. Here’s to the scruffy-looking Nerf-hoarder in us all!

The Amban Phase-pulse blaster will unfortunately not be out in time for Christmas 2020; it is available, however, for pre-order here at $119.99 and isn’t expected to ship until Fall of 2021.

“I want to introduce you to a personal friend of mine…” said by Cpl. Dwayne Hicks in the James Cameron film Aliens (1986) regarding...