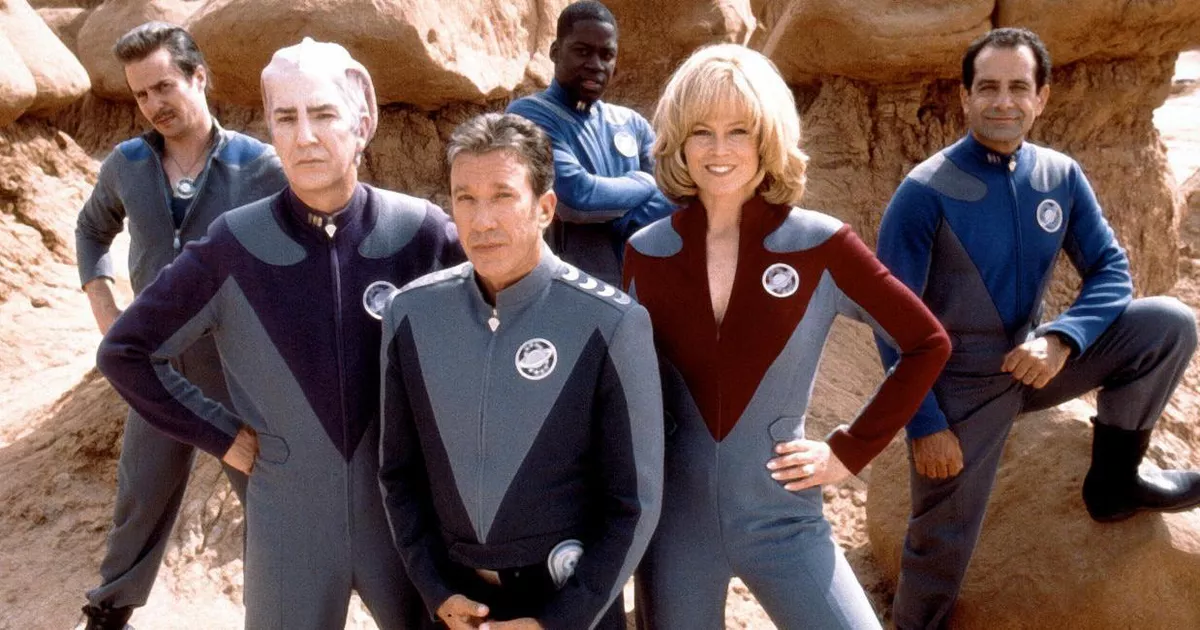 Galaxy Quest (1999)… A great parody of fan-favorite sci-fi series Star Trek (1966-1969)! The movie has many elements within which hearken to Trek in theme. Let’s explore what themes make Galaxy Quest akin to Star Trek and make it so great!

Brief story sum-up: in Galaxy Quest, a small group of actors who have fame from a former popular low-budget sci-fi T.V. series “Galaxy Quest” are invited by a race of aliens called Thermians to save the species from annihilation from a ruthless galactic warlord named Sarris!

Let’s face it… Tim Allen’s character Jason Nesmith is *the* Galaxy Quest rendition of one William Shatner; subsequently, his “Commander Peter Quincy Taggart” is akin to one “Captain James Tiberius Kirk”! Shatner is often thought of as a celebrity who loves his own legend; Nesmith from the word “go” is very fond of his own status as “The Commander” in their hearts of his fans. Yet he also has the same commanding presence when push comes to shove.

“By Grabthar’s Hammer!” Or is that “Live long and prosper”…? Alexander Dane (played by Alan Rickman) begrudgingly played alien crewmember Dr. Lazarus. Both characters are a great depiction of character Spock and actor Leonard Nimoy; the latter of whom did try to distance himself from his fame as Spock only to wind up embracing it in the end, much like Dane finally embracing his character once he sees how much it truly means to a dying Thermian crewmember who looked up to him.

Before that point, we see Dane comically suffer through his fame as Dr. Lazarus at many turns: his lament at his former days as a “professional actor” before Dr. Lazarus, essentially every time a fan says (or asks him to say) his Spock-like quote “By Grabthar’s Hammer, you shall be avenged!”

Jason Nesmith flees from a giant rock monster on an alien planet! Picture credit to twincitiesgeek.com

Remember the rocky, desert-like alien worlds you’d often see in Star Trek? How about the various times the commanding officer of the starship would rip or lose his shirt in a fight? Galaxy Quest had it too!

While searching for a fuel source, we see the Quest crew traverse a strange, barren alien planet which is almost a short put away from being the same Vazquez Rocks-based alien worlds Trek often took us to. Not long after, we see Jason Nesmith (the “Kirk”) get into a brawl with two alien life-forms and manage to become bare-chested a la Captain Kirk’s usual outcome. And how about the reference to the “Galaxy Quest” show being little more than cheesy sets and Christmas tree lights, not unlike how one might expect a certain *other* cheesy sci-fi T.V. series to be produced!

The “Star Trek” crew members in all their glory! Picture credit to comicbook.com

One thing fans of Star Trek have talked about here and there is an alleged tension between stars William Shatner and the rest of the regular Trek cast of shipmates; Shatner apparently being something of a prima donna and the rest of the actors being understandably annoyed with this attitude.

That same tension can be easily seen and felt between Galaxy Quest‘s lead character Jason Nesmith and the rest of his main cast member crew who endure his love of his own celebrity while they get by in his wake. They can’t stand him until he gets his act together, getting over his ego, and becomes a real, true “Commander” leading them to victory against the villainous Sarris.

Sam Rockwell as Guy Fleegman screaming in fear for his life! Picture credit to ca.finance.yahoo.com

Who could forget the lovable goofy Guy (played by Sam Rockwell)? Yes, Guy was Galaxy Quest‘s “dead man walking” example of what Trek fans call the “red shirt”; that is, a red-shirted member of the Captain’s crew who, often un-named, is doomed to die.

Poor Guy spends the majority of the movie living in constant fear of his own demise as he not only played such a “red shirt” when Galaxy Quest was on T.V., but factors of this “sci-fi adventure” they’re living all point to this inevitable outcome if such adventures are at all true. Funnily enough, the plain and simple Guy… no-one knows his last name until the very end; up to that point, he really was just a random Guy on the ship! Ironically, also the only crew member to not be shot by Sarris near the end!

Arguably the most popular Star Trek series in the franchise, “The Next Generation” brought us into the 24th century with new technology, a...

Star Trek: Lower Decks premiered August 6 on CBS: All-Access.  The idea for an animated comedy was great… execution… not so much.   It...