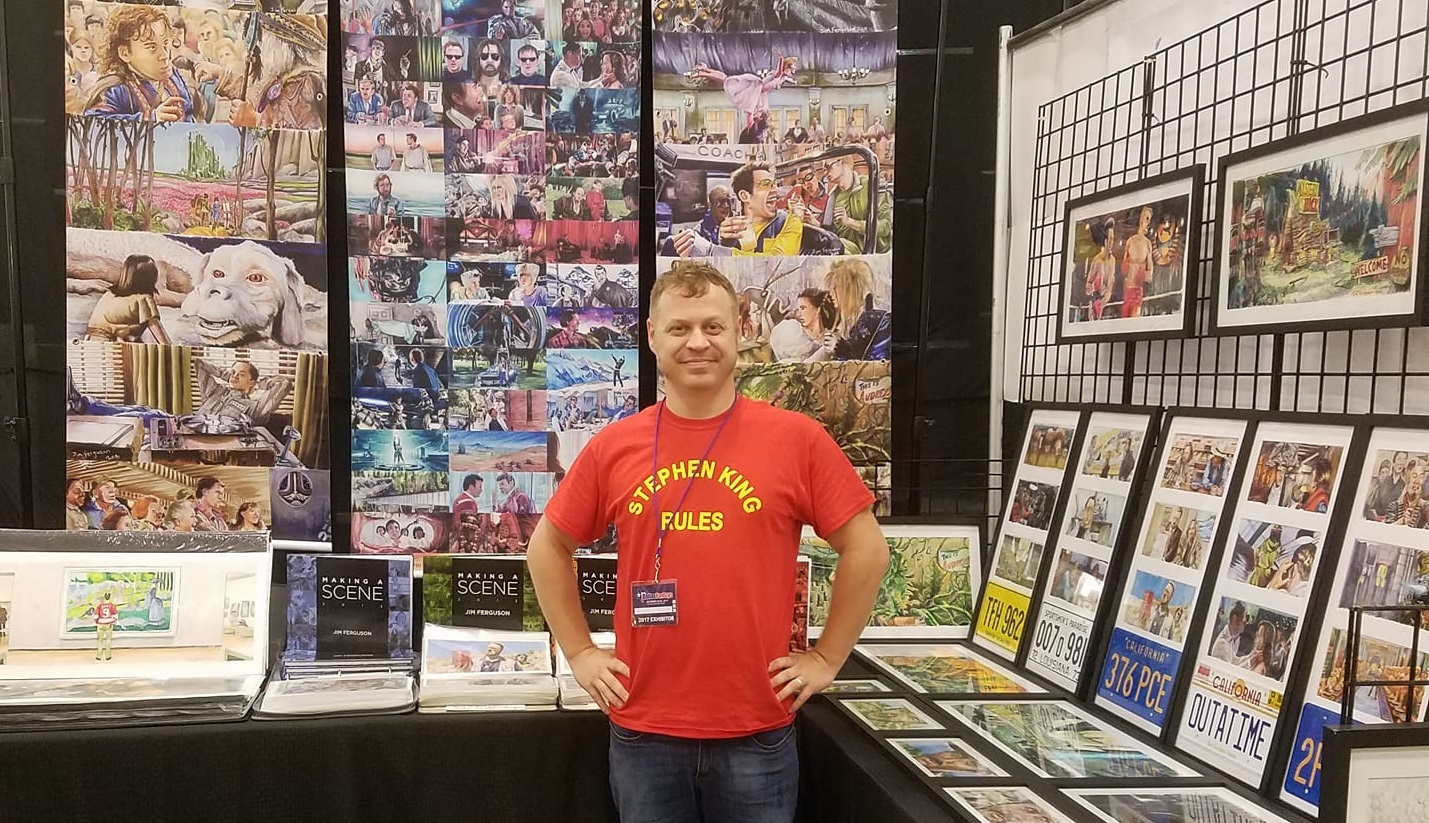 Geek News Now would like to take the month of November to highlight one of the great Geeky artists, Jim Ferguson. His unique style and variety of content make him a fan favorite both online and during comic cons. We grabbed a few minutes of his time to talk about his life in Louisiana, drawing during COVID, and his love of artistry.

GNN: Your inspiration to be a GEEKY artist came from….?

Jim Ferguson: I have been drawing since I was a little kid. Was one of the best in my high school and majored in Art in college. But I got a career in Mass Communications and worked at NBC and Fox. Ended up working at NASA for 9 years as a video engineer. One day my son wanted to learn how to draw Pokémon. I thought to myself watch this. I’m going to draw you an awesome Pokémon. Well I hadn’t drawn in about 10 years and my Pokémon sucked. A light kinda went off in my head.

It was something I was good at and enjoyed and I felt like I threw it away. So I started drawing every day after that. A friend of my was drawing sketch cards 1 a day for 365 days. I didn’t really want to draw just people and liked backgrounds and scenery so I started to draw full movie scenes. I started to get requests and commissions and things snowballed after that.

GNN: “Life is like a hurricane…” so says Duck Tales. Talk about these past few months and the weather in your neck of the woods.

Jim Ferguson: This year has been a challenge for sure. Being an artist is my sole income for my family of 5. Usually I have a packed comic convention schedule and do about 22 conventions a year and most of my income comes from those. But with COVID conventions were canceled and I was only able to do 1 convention this year. Luckily I have been selling online since 2012 and just switched gears and start pushing online sales… then we got hit with a major hurricane.

Living on the gulf coast most my life I have been through many hurricanes. But nothing like this. This hurricane was a direct hit and I think its the 4th strongest to hit the gulf in recorded history. The damage was unimaginable. No running water for a week, no electricity for 4 weeks and no trash pickup for a month. My house took a good bit of damage and my yard looked liked it got Nuked from orbit. However I was lucky. My home office was fine and somehow we still had internet. So I was able to keep my online store open and ran my computer and printer on a generator.

I did have to bring my orders about an hour away to ship though because our post office was open for a few weeks. Once things started to get some what back to normal hurricane number 2 hit. Once again no power and everything was shut back down. But the good news I guess is there weren’t many trees left for about 100 miles so we got electricity back in about 2 days. Hopefully we are done with hurricanes for a while but home repairs and yard clean up will probably take about a year to complete.

GNN: Have you met any celebs that you’ve drawn? What was that like?
Jim Ferguson: I have meet probably around hundred celebrities that I have draw pictures of and became friends with a few of them. Sean Astin liked one of my drawings and wanted to use it for a kickstarter he was doing. The next year he offered to do the foreword for one of my art books. I became friends with Peter Mayhew and his family. The Peter Mayhew Foundation even came to help with hurricane relief for our area after the storm.
GNN: What is your absolute favorite piece that you’ve done?

Jim Ferguson: Usually my favorite piece is one I just finished. 2 that stick out to me though were ones that were really hard for me to draw but I think they came out good. One I did from Superman III and one from the Lost Boys.

GNN: If you could create a portrait of any geeky celeb, actor, actress, director, etc, living or dead, who would it be and why?
Jim Ferguson: Hmm. I can’t really think of one I would like to have drawn. But I regret not getting to meet Carrie Fisher. I got her autograph but I had to send someone to get it because when I’m at a convention I’m there for work so it’s hard to get away and meet them. Usually I see them after a convention.
Check out Jim’s Facebook page here, but also spend a little time going through the outstanding art available at his shop. See him at a future comic con? Tell him we said to “stay geeky!”

The air was electric at the Fan Expo Dallas. This long awaited event took place September 17-19 and, due to the global pandemic, this...

Wizard World was a popular destination for fans across the United States with shows in Austin and Chicago, and had announced future events in...