We Need A Hero! Why Superman Is An Icon In Dark Times! 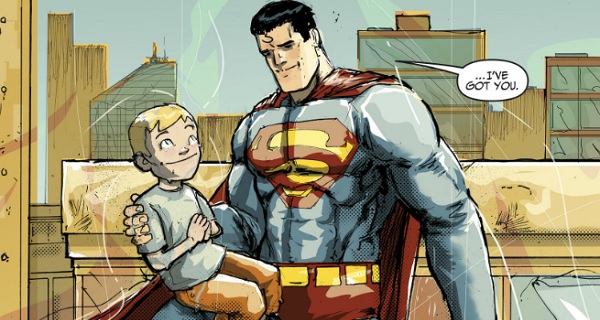 The world needs Superman! Whether it be in the comics, in books, on T.V., or on the silver screen, he is needed! The world gets pretty dark; someone with strength of character and virtues, like Superman, can bring people out of that darkness and into something better! But why is he such a good role model to look up to? What makes his light so strong?

Superman soaring back through the sky! Picture credit to wallpapercave.com

The times we live in… inequality, violence, bullying, the powerful lording it over the everyday person, a nation divided; we need a solid hero of light and strength who can unite! When hasn’t Superman endeavored to find a way to do so for everyone’s sake?

Let’s go over a few basics: Superman, the Last Son of Krypton, lives in the city of Metropolis where he leads a double life as mild-mannered news-writer Clark Kent and as world protector Superman. Throughout the years since his creation, the character stands for truth and justice; associated as the American way. He also stands for a wonderful variety of other things: equality, courage, strength, and more. We need all of that now; just as much as ever.

Well, something which must be understood is that what the latest movies get wrong with their take on Superman is this image of him being almost entirely about his superpowers, his being a walking demigod among mortal men, and how this must be a terrible burden…

Superman surveys the scene ahead as he scouts around for his next adventure! Picture credit to geektyrant.com

Ask most any fan and they’ll likely tell you that in the best tales the Man of Steel is what he is, yes, and it is a heavy gift; but it is seen as a gift nonetheless! Superman is a means for one man to do some amazing good in one world and save as many lives as possible every single day; and he does this often times with a smile on his face.

Why? Well that’s probably because of how he was raised by adoptive parents Jonathan and Martha Kent back in Smallville, Kansas! From a young age, the Kent’s instilled in Clark a strong moral compass which could be trusted to know that you do good for other people not with hope or expectation of reward, but because people need the help in this world full of troubles. They raised Clark to believe that if you had the ability — or in his case, many abilities — to do good, you did the best you could to do that good with whatever gifts you have at your disposal.

Even Superman likes to help with the seemingly little things, like when a kid has a bike accident. Picture credit to twitter.com

That is Superman; helping people because he can, because it’s right to help your neighbors and fellow human, and because, frankly, he cares about more than himself. Can we say that of a lot of people in charge these days?

And there’s one thing which I feel has always kept Superman very grounded in terms of knowing what it’s like to be part of humanity, though he himself is superhuman and from another planet: he keeps a whole life and job among the average, everyday people of the world and it keeps him living in reality of what people say, feel, think, do, and more! He knows our problems because he takes the time to listen to them and become involved. It makes him a stronger superhero for it.

Superman saves a crowd of innocent people from being killed by a white supremacist in “Action Comics” No. 987! Picture credit to vox.com

Superman cares about finding peaceful solutions; he doesn’t bully his way through situations because he knows that is not strength at all and leads by a better example. He doesn’t force a situation unless there is absolutely no other choice because he respects the freedom and power of people to grow and resolve situations themselves.

He offers hope to those who seem to have lost theirs; he’s done that for me so many times with his example in various stories.

The Man of Steel offering comfort to a person who almost gave up on themselves. Picture credit to comicsbeat.com

That’s what he does; he inspires! When things get dark, strength and courage are needed and one figure has always stood tall to offer both: Superman. He never gives up and always looks for as humanely a way to resolve a situation as possible. His values and ideals are something to strive for though fictional character that he is. I challenge that any of us could find a piece of his strength inside ourselves if we look hard enough and allow the light inside. We need him still, and those virtues and values, after all these years to face any days of darkness.

In this article:DC, superhero, Superman