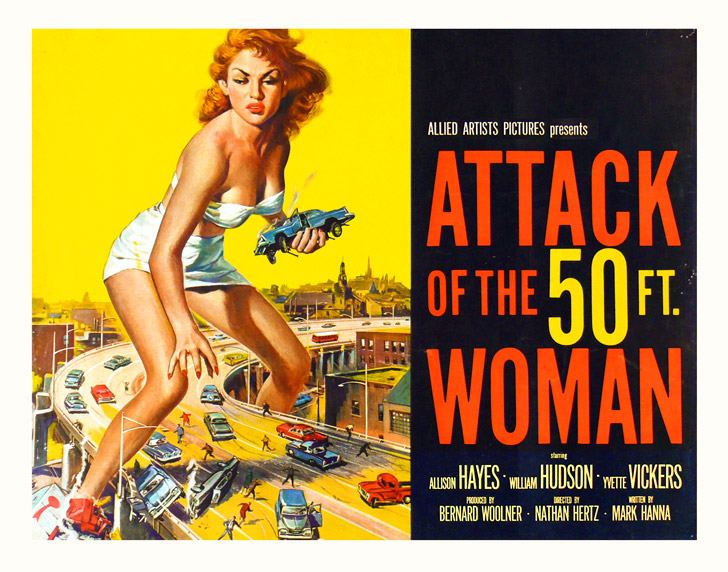 Ever wondered what you could do with $100,000 budget, eight days filming, and script that tells the story of how an abused woman’s alien encounter helped her seek revenge on her adulterous husband all while providing an icon movie image that’s empowered women for decades?

Then Attack of the 50 Foot Woman must not be missed.

In 1958, with the nuclear annihilation fears of the cold war in high gear, Hollywood fed the fire of what would happen if people or animals were oh so casually touched or infused with massive doses of radiation for whatever reason.

Part of the Colossal Beast Film series, Attack of the 50 Foot Woman, starred Allison Hayes as the total role of Nancy Archer, a wealthy, but dispirited socialite with a history of drinking and “emotional instability”. One night, after yet another fight with her husband, she takes a lonely drive in her convertible in the middle of the night out into the Northern California dessert.

While out, she runs smack into a very large pearl shaped spaceship, as one often does during a late night solo rage drive to no where. Mr. Alien, a Yul Brenner look-alike with ginormous hands, would gladly take that huge diamond drop necklace Nancy’s wearing. Not sure what he plans to do with the necklace as he’s really not wearing the right outfit, but Nancy’s not having it.

After a good bit of screaming and his hands getting no where near her necklace, she turns right around and heads back to town to tell everyone about what she saw.

Keep your hands to yourself Mr. Spaceman!

To Nancy’s dismay, her history of drinking and her recent release from the “Booby Hatch”, undermine her credibility. The townsfolk don’t believe her despite her pleas for help. She does this all while looking truly immaculate after her alien blind date and driving like a bat out of hell with (car) top down.

Meanwhile, Nancy’s cheating hubby, Harry, played by William Hudson, and his girlfriend, Honey, played by Yvette Vickers, have decided that they would be far better at spending Nancy’s money than she would.

Honey (Yvette Vickers) and Harry (William Hudson) team up to get rid of Nancy.

With a swish of her eyelashes Honey convinces Harry to kill Nancy and get his wife’s millions.

Mind you, as they plot their fiendish ways, they sit at a booth at what appears to be the only restaurant in town. It’s packed and it’s obvious everyone knows who they are and what they’re doing, but sure, Nancy is the unreasonable one.

As soon as Nancy finds Harry, she convinces him to go back to the desert with her to find the ship. He reluctantly agrees, but we all know he’s probably eyeballing places to dump her body when he gets around to killing her off.

After driving around for a bit and her apologizing for pretty much inconveniencing his evening, low and behold, there’s the spaceship! Without pause or worry, Nancy runs to it and slams on the door like a production assistant does to get an actor out of their trailer.

Huge Hands–interesting fact. The actor who played the alien, also plays the bartender at the restaurant where Harry and Honey hang out, plotting to kill Nancy.

This time, Huge Hands reaches for Nancy because he simply must have that necklace. Dude! Get your own!

Harry, being the stellar husband he is, Harry fires a few shots with the handgun he conveniently carries in his blazer before running off, abandoning Nancy in her time of need.

Pretty much like he’s done in their entire marriage.

Obviously, Huge Hands felt bad about causing Nancy to miss her ride, so he has the decency to Uber Nancy on her pool house. Yes, drops her off right on the roof, before he takes off to another planet or potentially a jewelry store to get something that matches the necklace he’s taken for a transportation fee.

When she’s found on the roof, Nancy’s not feeling herself as most would not be when they wake on their houses. Instead of asking how she is, she’s sedated by her physician. Typical move in films like this because the guys are terribly worried Nancy might be a bit out of sorts regarding those strange scratches on her neck where her necklace used to be.

Of course, her doctor so casually mentions Nancy might have been exposed to radiation without a hint of worry. I guess, he didn’t take that rotation elective in medical school where they cover what happens when things get a smige of radiation, especially in desert towns in Northern California.

Well, maybe he did because they restrain her and she’s not liking that one bit.

When her beloved Harry shows up to give his wife a lethal dose of a sedative, surprise, surprise, he turns the light on to find she’s 50 feet tall and gonna blow the roof off this place.

Like literally. She blows the roof off her house and looks truly fabulous doing it, too.

I mean, who knew being zapped by alien voo-doo, being totally oppressed by your cheating spouse, and your height being stretched to the length of a grey whale, would give you a fabulous Marilyn Monroe inspired platinum long bob?

Seriously, other than the radiation exposure, this is scenario is straight out of an 80’s nighttime soap.

Complimenting her new hair–some spontaneously appearing and strategically placed bedsheets for a skirt and a lovely twisted bandeau for a bra. Nancy has the perfect outfit to go stomping around town in search of her adulterous and potentially murdering, husband as well as his lover.

Mind you, Nancy only stands 50 feet with nine minutes left of the movie, but time doesn’t appear to be an issue for her because she saunters right into town to find her Harry.

You can’t rush a woman when she’s on her own timeline.

As soon as she locates him at the only restaurant in town where everyone knows about Harry’s canoodling, Harry grabs the local sheriff’s gun and shoots at her, which doesn’t go over well. In fact, Nancy finally realizes what a total jerk she married and lets everyone have it by way of ripping the place to pieces.

She’s not having it, Harry.

A few moments later, Honey eats a rafter of the restaurant before Nancy scoops up her husband to carry him off for some overdue couple’s therapy in the desert. All the while, he’s screaming, “You killed Honey!” as he attempts to shift the blame away from his infidelity and once again, blame Nancy for everything that sucks in his world.

It doesn’t take long for Nancy to realize how much power she had this entire time, because now she’s literally got Harry in the palm of her hand and his fate is all up to her.

Sadly, the sheriff had to fire off a couple of shots from his long-barrel, causing the power lines to spark enough to kill both herself and her husband. It probably also blew out the local transformer out for the next several weeks.

She dies looking truly fabulous with perfect hair and makeup and no wardrobe malfunctions, despite the impromptu bedsheets ensemble.

Attack of the 50 Foot Woman may sound like a typical bad movie of the 1950’s monster film genre that’s truly great.

Despite Nancy having all the money and truly, all the financial power, the social stigma, both fictitious and not, expected her to  default to her husband about everything. This included her own health and peace of mind. Because she couldn’t keep it together enough to simply let her husband do what he wanted including cheat, lie, and potentially murder her, she’s the problem.

Add Harry and Honey making no attempts to hide their affair and the townspeople who weren’t bothered by their blatant infidelity, I’m not surprised how truly lost and lonely Nancy must be and why she went on that slow saunter of a rampage when she had the chance.

She emulated so many women at the time. Smart women who had almost no input either legally or socially to their own lives. Those who felt trapped by financial and/or educational means. The world around them giving little sympathy to their stories,  as they simply waited for that moment to break free and be able to stand tall on their own.

Remember, in 1958 in the United States, women could not apply for pretty much anything without a male cosigner and good luck having any say about the finances. Women were kept out of the workforce and higher education as much as the law allowed and beyond, but the rumblings of change had already started.

Within five years of this film’s release, the best seller, The Feminine Mystique by Betty Friedan hit the best-sellers list and by 1966, the National Organization of Women (NOW) was established.

In the 1970’s, a young, driven attorney named Ruth Bader Ginsburg, presented six cases on gender equality before the Supreme Court of the United States.

She won five and changed the landscape for women in the workforce.

Ironic that a woman who barely stood just over five foot tall became such a notorious and gigantic force within the US Judicial System.

Cult classics like Attack, give us a window into not only the society of the time, but what brewed under the surface. Like Nancy’s constant fight with trying to be the woman society wants her to be and the woman she is. It’s important to note that although her realization of her own strengths came late in the movie, who knows how many women Nancy encouraged to believe in themselves each time she breaks the chains and stands on her own.

If the character she played doesn’t inspire you, know the actress Allyson Hayes, showed what dominating character she could be off screen as well. After years of health issues and having to walk with a cane by her mid to late thirties, she invested in her own health. After researching extensively, she discovered she had lead poisoning from the calcium supplements she routinely took.

In the mid-70’s she began a campaign against the Food and Drug Administration to ban the import or sale of the food supplement of that formulation. Although, she passed away from complications of leukemia in February 1977, at the young age of 47, her advocacy caused the laws to be amended regarding the importation of nutritional supplements and changing the formularies.

As campy as this movie is, the movie poster of Nancy standing tall and fierce and yes, a bit pissed off, serves as the inspiration for women all over the world as they fought and continue to fight for women’s equality and health.

In fact, the poster is so iconic, it ranks eighth on Premiere Magazine’s Best Movie Posters of All-Time list.

It continues to serve as a reminder of how strong we can be when we stand tall and know our own worth.

Pretty good for eight-days work and a very small budget.

Check out the trailer and tell me what’s your favorite 1950’s monster movie?

In this article:Attack of the 50 Foot Woman, Colossal beast Film series

Feel nostalgic for truly bad monster movies from the 1950’s? Want a simpler time were “men were men” and women wore pearls and heels...