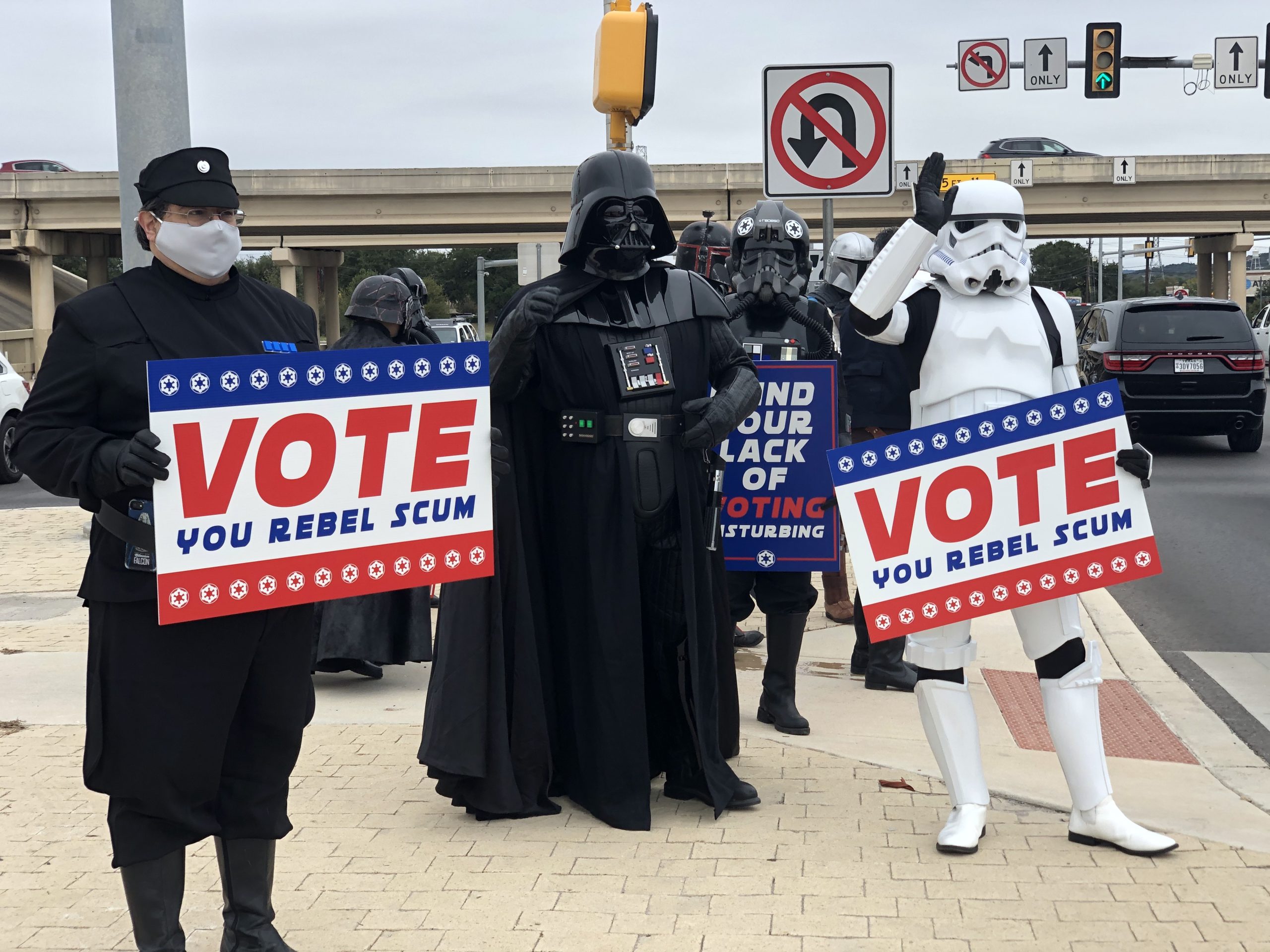 If you happened to be driving through San Antonio Saturday morning, you might have noticed an unusual sight: Darth Vader leading a squad of troops. Stationing themselves at the busy intersection of Bandera and 1604, Lord Vader, and his men were accompanied by Kylo Ren, a pair of Mandalorians and, of course, Baby Yoda.

As drivers honked and passengers took pictures, the team made their message loud and clear, brandishing several signs encouraging locals to get out and vote. Helping lead the effort was San Antonio City Councilman Roberto Treviño, who made his appearance dressed as Han Solo.

Before the event was over, I was able to speak to Councilman Treviño about the event, the continuing resonance of Star Wars, and the importance of getting out the vote.

GNN: What was the inspiration for getting everyone together this morning?

Councilman Treviño: Well, we’re already seeing incredible voter turnouts in this election, but there’s still more to do. We’re not endorsing any candidate, or telling anyone who to vote for, but we want to encourage every eligible voter to go out and make their voice heard. What better way than with a cultural icon like Star Wars?

GNN: It certainly draws more attention than if everyone was just in street clothes.

Councilman Treviño: Exactly, Star Wars has resonated with people for a long time, and I think the core of that is the message of hope and standing up for what’s right. Sure, it’s in this incredible sci-fi setting, but it’s these characters getting involved, choosing to be part of something bigger than themselves that people can relate to. Like in the real world, some people are directly involved, some want to be more involved, and others are reluctant to be involved at all.

GNN: So, you’re hoping to reach those reluctant, possibly apathetic voters who don’t feel like there’s a point to being involved?

Councilman Treviño: Absolutely, and I feel like that’s at the core of a character like Han Solo. At the start, he didn’t want to be involved. He didn’t think he could make a difference, so he just tried to look out for himself. But once he does make the decision to get involved, he’s able to fight for change, and ultimately makes more of an impact than he could’ve anticipated. I think stories like that resonate with people, so we want to remind them that their voices matter too, even if they don’t think so.

Han Solo rebelled, you can vote, and if you’re in the San Antonio area, you might be lucky enough to see Darth Vader and other iconic Star Wars characters make further appearances ahead of Election Day.

In this article:cosplay, interview, Star Wars