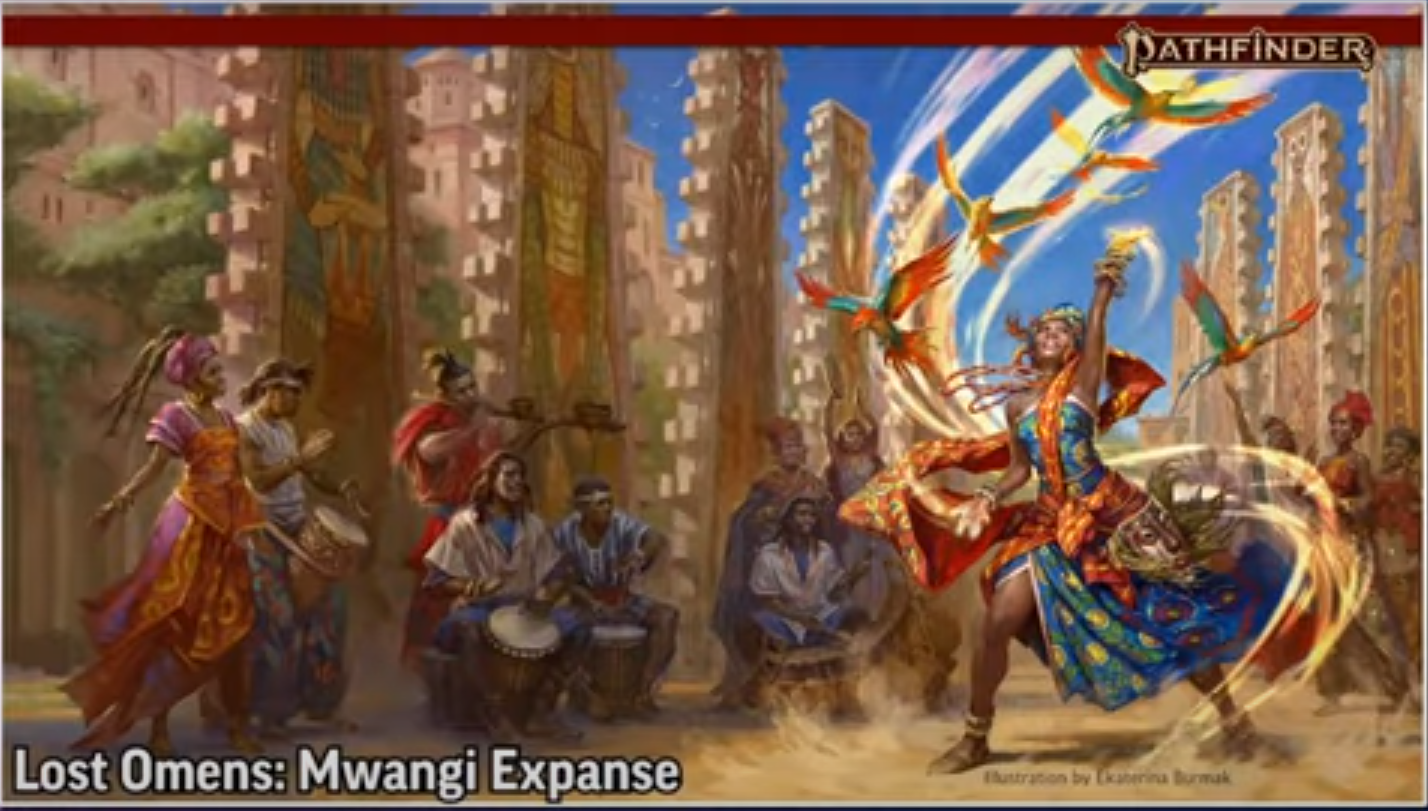 Lost Omens will have a new book and adventure path released in June 2021.  In a PAX panel hosted by developers Luis Loza, Ron Lundeen and one of many new Authors for this expansion, Allie Bustion, the announcement was made that the new game expansion would be titled Mwangi Expanse.  Almost 300 pages of detailed exposition awaits those thirsting for further adventures on the world of Golarion.

****To join the world of lost omens go to https://paizo.com/pathfinder

The titular Mwangi expanse area, lies south of the inner sea, which is the centre for many of the pathfinder adventures.  The inner sea is a fairly close representation of the Mediterranean area of earth.  With the expanse forming the geographical equivalent of Central Africa.

That correlation will be culturally reflected in the book, which will feature influences from both African and Caribbean culture.  A large portion of the Authors working on the project, including panelist Allie Bustion, are people of colour, drawing from their own experience.  This will mean the expanse will offer an authentic blend of new cultural creativity distilled with the familiar player universe.

Geography will be another key feature with cities like Nantambu and Mzali in the nation of Vidreon, featuring heavily in both the book and the subsequent adventure path.

Mwangi expanse will include a large bestiary, with both familiar and many new creatures.  The panel promising a plethora of detail in several of the races, some getting as much as ten pages apiece.

The book won’t be simply setting material, there will be new rules included to back up the settings.  There will be six new ancestries, some that have been requested like the Anadi, some familiar like the Grippli and the Gnoll.  There will be new deities, as well as ones previously mentioned like Grandmother Spider.

The guide book leads in to the release of a new Adventure Path coming July 2021 called “The Strength of Thousands” running through to December 2021, and potential SPOILER WARNINGS from this point on.

The path takes place at the Magaambya magic academy in the Mwangi Expanse, the oldest and most prestigious non western magic school in the world of Golarian.  The story will start the player at level 1 as a student and progress through to becoming teachers, ultimately holding the fate of the school in their hands.  It will be open to characters of all kinds, bonus spell casting abilities will be layered on if your character has none.   The initial focus will be on the school, but adventures will be across the expanse and even an interplanetary excursion.

Teachers in this universe often travel across the expanse as trouble shooters or negotiators, they are a group highly respected by the locals.  The name Strength of Thousands relates to the cumulative body of both current and former students, their work, their contributions and legacies which have led to this status and lineage enjoyed by the school.

The first adventure available July 2021 is called “Kindled Magic” and will heavily feature bugs.  I’d be surprised from the discussion if we don’t see a sort of Harry Potter goes to Africa flavour.

This will be followed by “Spoken on the Song Wind” which derives from the name Song wind City, which is the alternate name for the city of Nantambu, which is where the Magammbya magic academy sits.  This stage will see you explore some of the local communities on offer in the Mwangi Expanse book.

The third will be “Hurricanes Howl” and it will add perspective and range to the players responsibilities and will take place at least partially in the “Sodden Land”.    The fourth installment will be “Secrets of the temple City” which will explore the city of Mzali and it’s Mummy god.

There will also be a tonne of background support, including an initial student roster explaining who the fellow students are, their background and personalities.  Later as the character become teachers, a list of your peers will also explain the other teachers and their role.  Becoming a teacher will not limit your learning, there are many skills you will still learn on the fly through your adventures.

Lost Omens fans should expect to enjoy both a richly creative and solemnly detailed experience.  True to it’s pedigree the Mwangi Expanse looks to also be beautifully illustrated with little imagination required for enjoyment.

The multiple Author element should work well, rather than being compartmentalised the Authors have been highly collaborative, with ideas formulated and re-imagined between Author and developer, feeding off each others creative process.

Are you an experienced Lost Omens fan, are you excited to be exploring this new world?  Leave a comment and hit subscribe.