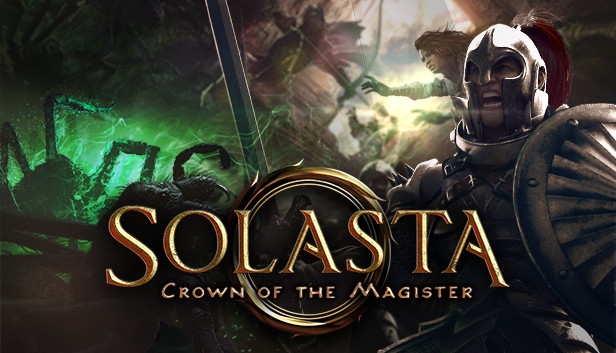 The hardest part of organizing a tabletop campaign is the scheduling. One person can’t make it this week. Someone’s working that week. It can be frustrating, and this often stops players from campaigning. Additionally, this pandemic has put a damper on many campaign plans.

Enter Solasta: Crown of the Magister! Brought to you by Tactical Adventures, Solasta is a team-based adventure game that feels just like a D&D game. Wait a minute…

Yes, that’s right. Solasta uses Dungeons & Dragons SRD 5.1 rules and content. If you are familiar with D&D tabletop gaming, you might be interested in this game. In fact, you can play the demo right now during PAX Online!

Get the Party Started

Right off the bat, players are given the option to create their own characters. During the demo, you will not be able to play your character, which was a little disappointing. However, the character creation alone is enough to keep me wanting more. In the demo, players have access to 5 different races and some sub-races. Select your class, background, and proficiency, then assign your attribute points and create your character’s identity.

Players can create an entire party of their own characters, which gives them the opportunity to try various combinations and stats. If you like writing stories, this is the perfect way to bring a character to life. Once everything is in order, put your party together, and move on to your new adventure.

With a full party of newly created characters, players move on to their first adventure. In the demo, you are given a pre-made party of 4 charming characters. You can move each character individually or all together as a group. Different characters have different strengths, and you will need to use these to your advantage.

Use the surrounding terrain as part of your strategy and progress your party safely through the dungeon. You can enter into Cautious Mode to avoid detection and locate traps. The game tried to warn me to use this mode when I came across an encampment of orcs. Did I listen? Absolutely not! No caution, only battle!

As in any D&D campaign, all actions are decided by the roll of virtual dice. Of course, you do not see these dice. Your only indication of a roll is a notification in the corner of your screen. This makes the game move smoothly and with little interruption.  Combat is turn-based and uses a grid for movements and attacks. You will have to keep an eye on your character’s abilities, weapons, and health. If you enjoy grid-based strategy games, then this game is for you.

There were a couple features that weren’t my favorite part of the game. The camera navigation was especially frustrating to me. The camera is mostly set at a top-down view. This is perfectly fine until one goes inside an area with multiple levels that the party needs to navigate. While you could turn the camera left or right, you could not rotate it up or down to get a better view of things. This also made it a little difficult to click on certain areas for movement.

I also would like to have seen a slightly better tutorial. A pop-up would come up to inform me of something, but I wasn’t shown where to find certain features. For example, I was told about Cautious Mode, but the main reason I didn’t adhere to it was because I wasn’t sure how to activate it. It wasn’t until after I Leroy Jenkins’d a whole orc camp that I discovered how to turn on this mode.

As someone who has never been able to campaign due to scheduling problems, this game is perfect for me. The character creation is my favorite part and I could spend all day making new characters and stories. It is important to note that while there are some issues, this was just a demo. I would definitely play this more, and I recommend this game for those who would like to try a D&D RPG. But mostly, I can’t wait to see what kind of RPG shenanigans Solasta will bring.

Based on the demo, I rate this game:

Solasta: Crown of the Magister comes to Early Access on October 20, 2020. In the meantime, go try the demo on Steam! After that, follow us on Facebook and Twitch and tell us your story in Solasta!