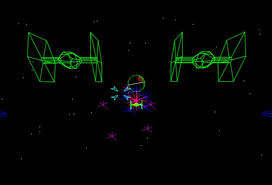 Penny Arcade Expo (PAX) is in full swing this week and there is no shortage of panels to quench your gaming thirst. Str8jaktJim and Inferno two Australian gamers sat and discussed their favorite and not so favorite games from the Star Wars universe. The covered everything from flight sims to the roleplaying games (RPG) and covered all their favorites as well as mentioning some of the less than adequate games.

They kicked off with the games that they first played and we were taken on a trip down memory lane as they spoke of Star Wars: Arcade and Super Star Wars. Then of course they moved to the flight sims where they covered the X-wing series of games which of course included TIE Fighter and of course X-Wing vs. TIE Fighter which was of course offered an online multiplayer experience.

Then of course came the first person shooters. One of the favorites there was  Republic Commando .  This game set in the Clone Wars and leads right up to Order 66. It also “humanized the clones. They all have numbers but they all have names for themselves, and The Clone Wars TV series built on that.” The they moved to Shadows of the Empire which was multi-platform game, meaning that there was a comic book, novel, and even a soundtrack that accompanied it.

Real time strategy (RTS) games too the stage next and it was all about Empire at War. As far as the RTS games this was in my opinion as well as theirs the best of them all. As mentioned i the panel the soldiers and resources that you used in one mission were still available for further use in future missions.  you also had space missions as well as ground missions which is something new for the Star Wars RTS.

What list could be complete without  Knights of the Old Republic. This is arguably the most beloved of all the Star Wars games. There was so much going for this game, detailed missions, colorful characters, a rich story line, and one of the greatest characters introduced outside the films.  Darth Revan not only made another appearance in The Old Republic,  but he also appeared in the novel Darth Bane: Path of Destruction.

With the good comes the bad and the guys had no shortage of “not so good” games. Rebel Assault made the list due to having to restart missions from the beginning for every time there was a loss although the full motion video was a saving grace. The next was Starfighter which did not fulfill the need and want for a new flight simulator.

There are tons of different Star Wars games to choose from and everyone has their favorites. I for example, love the Lego Star Wars games. Add to that we have the new game Star Wars: Squadrons Which is an all new flight simulator coming in the month or two. Leave a comment and let us know what your favorite game is or what you would like to see in a future Star Wars game. Give our webpage a visit and like us on Facebook and if video games are your thing then check out our Twitch