Twilight to Midnight! New Book Shines on the Cullen Clan! 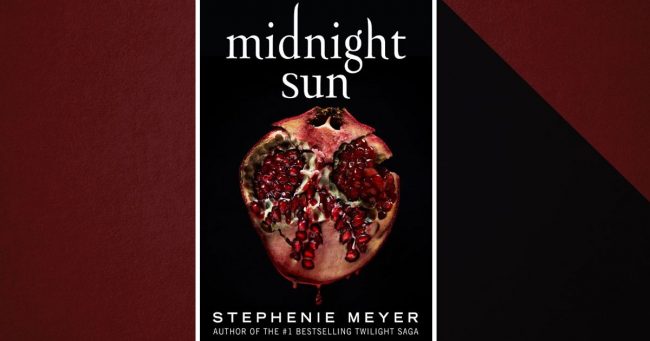 “And so the Lion fell in love with the Lamb.”  Twilight fans can rejoice!  Midnight Sun has finally been released and it is a sparkly read!

Midnight Sun, the long awaited tale by Stephanie Meyer, released on August 4, 2020.  We journey back to Forks, Washington and into the mind of our very own sparkly vampire, Edward Cullen.  The story takes place at the same time as the original tale. This is the second book to come out since the conclusion of Bella’s POV story line.  The first was Life and Death and it is Twilight but gender bent.  I was more excited for this one.  For anyone that was a huge fan you know why Midnight Sun almost didn’t happen.  During the peak of Twilight’s success after Breaking Dawn released Meyer had announced this novel.  She eventually experienced a leak by someone who she had trusted and decided to not release much to fan disappointment.

The new POV is very refreshing and definitely is better than that of a whiny teenage girl.  Midnight Sun shows what Edward was doing throughout the movie.  You see what was going on at the Cullen house when Edward saved Bella from being crushed by a car.  I wish my family meetings ran as smooth as theirs.   The family dynamic is amazing for people not related by blood.  I love how you see Edward having private conversations with Alice and Emmett and everyone in the family.

The best relationship you see with Edward is his and Carlisle.  As adopted father Carlisle is Edward’s biggest supporter and helper.  You even see the inner workings of Bella’s so called “friends,” Jessica, Angela, Mike, Tyler, and Eric. Definitely refreshing compared to not knowing what everyone is really thinking.

I enjoyed reading it from page one.  From Edward’s sarcasm to his frustration, it was a highlight to see the other side of the story. We learn that Edward’s love for Bella drove him and his family, by family it was mostly Rosalie, crazy from day one.  We see what he did when being creepy and watching Bella sleep, which was watch her sleep and ponder what she was dreaming about. I laughed a few times knowing what she was thinking, after all  I read the original novel four times. This book was definitely written for my Team Edward heart.

In the original Twilight book, Edward just seemed like this elusive, standoffish loner.  However, in Midnight Sun you see him in a new light.  He is a protector, a supporter, a family oriented being.  He fights the darkness inside even though his vampire nature just wants to strike.  He flops so many times in just one scene struggling with his emotions and his desire to kill Bella despite his intense love for her.  The struggle is real for this “vegetarian vampire.”

However, given the amount of time it too to write this book there were of course a few differences but you’re in a different character’s brain.  In Midnight Sun you see more of the Cullen’s and you learn more about their individual personalities.  There is still the constant “what is x character thinking” but we see it from someone who reads all but one mind.  However there is not the thinking about ways to die or cheesy lines we hear from Bella throughout Twilight.  It is a very welcome change of pace.

If you are a Twilight fan like me then you will love this book.  I did not want to put it down.  I will definitely read it again and again.  The easiest place to secure your own copy is definitely Barnes and Noble.