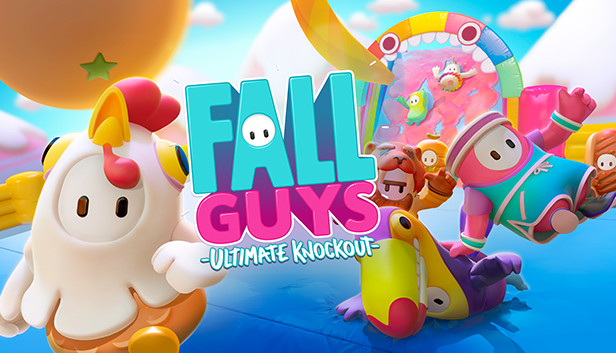 When something becomes popular, I tend to try to stay away from it as much as possible. I’m already hyped up about too many awesome things. So when Fall Guys: Ultimate Knockout suddenly began trending among gamers and streamers, I immediately avoided it like the plague. Then I saw one of my favorite YouTubers play it, and I broke. It was time to experience the hype for myself.

Fall Guys is one of August’s free games for PS Plus members, so downloading it was a cinch. Plus it was a small file, only about 7-8 GB, so I didn’t have to make space on my hard drive.  As soon as it was done, I jumped right into my first game.

And watched as chaotic bliss unfolded.

Some of these doors are fake. Can you find the real one? -Fall Guys

On Your Marks, Get Set, Fall!

If Wipeout and Mario Party had a baby, it would be Fall Guys. This colorful game follows the premise that players are participating in a live game show. 60 players must fall, dodge, grab, dive, and fall through four rounds of varying obstacle courses until only one is crowned king of the course. After about five seconds of glory, even the king is dropped and it’s time to start a new game! If you didn’t make it to the next round, you can spectate and cheer for a player, or you can drop and play a new game.

There are currently 24 different obstacle courses to tackle. Want to play tag? Check! Want to go on the see-saws? You got it! The courses come at random, so it’s always a fresh game with every playthrough. Racing, survival, team play…this game has it all.

One of my personal favorite courses is the Door Dash course. It is always amusing to watch 40-60 characters throw themselves at a series of doors in the hopes that the door they choose is the correct one. Once a door opens, everyone scrambles to get through to the next set of doors.  To add to the chaos, the previous doors then become obstacles to hinder the next path. This is one of those courses where it pays to take it a little slower than others. Let the pawns go first, then take your crown!

Why Do We Fall?

Any game with customization gets bonus points in my book. Fall Guys doesn’t currently have a whole lot right off the bat, but there is potential. Customize your “guy” with colors, patterns, face plates, and costumes. I started off with a silly-looking wolf head and paws for my “guy”, and I can’t wait to see what upgrades I can get.

As with most free-for-all style and battle royale games, Fall Guys has its own battle pass. Players earn fame based on their performance in their matches.  This fame fuels the battle pass, which in turn produces various prizes. Prizes include cosmetic items, Kudos currency, and Crown currency. This season is free. Only time will tell if future seasons will remain that way.

When you have currency, you’re going to want to spend it on something. The Fall Guys shop is the place to do just that! There you can spend your hard-earned Kudos and Crowns on cosmetic items. If you don’t like what you see, just wait a few hours. The selection rotates out to keep you coming back for more.

In addition to the battle pass and store, there are a couple of costume dlc packs available for purchase in the PlayStation Store.

King of the Course…for now – courtesy of Twinfinite

Straight Up a Good Time

Fall Guys is the most fun game I’ve played in a long time. Easy to pick up, difficult to master. There is no story, no shooting, and no looting. It’s just you, 59 other players, and total chaos. Players and spectators alike will find themselves yelling and cheering at the screen in simultaneous joy and rage. It’s fun for the whole family!

I can honestly say that I’ve fallen for this game. The lack of customization gets a docked point, but that can be easily remedied with future content.

Don’t just take my word for it. Go download Fall Guys and try it yourself! Then find us on Facebook and tell us what you think!