Need A Little Charm In Your Gaming Life? "Talisman" Awaits You! 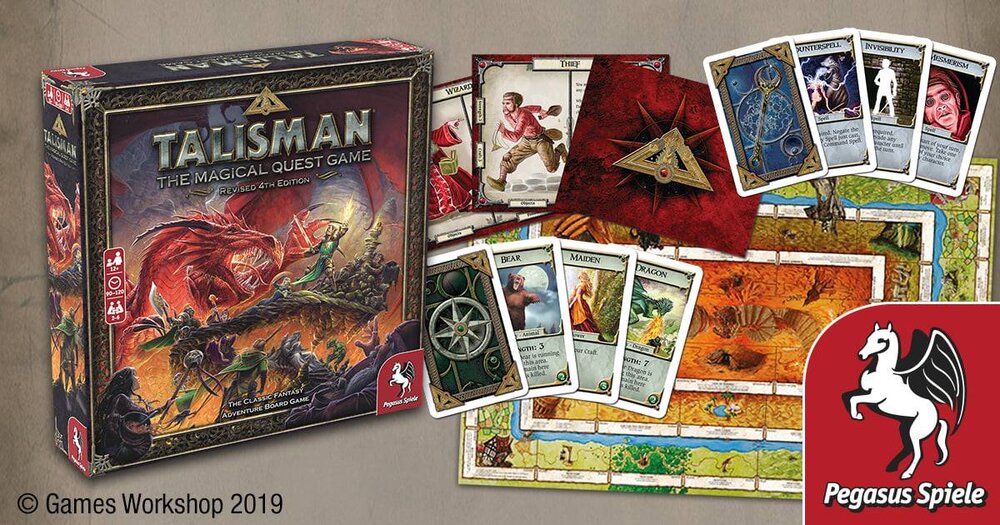 Talisman… The game which pulls players into a world of epic sword and sorcery imagination! This is the absolute *best* board game I’ve ever played!

The basic layout: 1-6 players choose a character role with special attributes helpful to their journey within three regions: the Outer Region, the Middle Region, and the Inner Region. They draw cards and face enemies and monsters (woe be to the poor soul who fights a dragon early on in the game-play), gain aid from followers, collect weapons and items of normal and even magical uses, cast spells, and accept quests from a warlock for special rewards or a Talisman.

First released in 1983, the game has gone through four editions. I played the second edition for quite some time, but have long-since purchased my own revised fourth edition set and enjoyed bringing new players into the game.

Among the fun aspects is casting spells! One could cast on themselves to improve their situation somehow — turn invisible, healing, that sort of thing — or they could cast on other players and aid them or, more likely, hinder them. With one card you could slow another player down, cause them to lose valuable objects or followers, make them immobile, even cause them to lose their way in misdirection. It is *tempting* to mess with your fellow players, let me tell you…

The best of the expansion sets is a tie between the Reaper and Blood Moon sets. Both come with a fearful opponent: Death himself and a Lycanthrope. Roll a 1 and be prepared to move them as far away from yourself as possible or set them on another player and watch them roll for their life or rewards!

The Doomsayer! Picture credit to boardgamegeek.com

My favorite character is the Doomsayer! His “Strength” score is 3 and “Craft” score is 4; meaning his ability to wage magical or psychic combat is a hair stronger than his own raw strength… And as evidenced in the provided picture of his character card, the Doomsayer’s special abilities are an advantageous godsend! Especially replenishing your Fate tokens; a Fate token being a piece which allows you to re-roll your die if you need to get a different result in move length or combat.

What I like about Talisman is that no matter what character you get, no matter how seemingly great or small their attributes, it’s all down to what you do with them. Everyone playing has a chance to win! I’ve seen the Monk win and he is what I’d call the least well-equipped in the field as attributes go.

There are only two problems I ever had with Talisman: the time length and the expansion boards.

It normally took 5-7 hours to get through a game and sometimes I became painfully aware of this; literally, because I’d have been sitting for hours and needed to stand up and let blood recirculate. I swear, the shortest game I’ve ever played lasted about 25 minutes and the player had simply the best roll of luck throughout!

Talisman with all four corner expansion boards! Good luck leaning over all that. Picture credit to Pinterest

The expansion boards are a hassle! The main board itself is so big it takes up the width of your average table; now tack on four board expansion pieces to all four corners and you have a heck of a problem: keeping the corner pieces from falling off the table!

But those two problems are not enough trouble to keep one from enjoying Talisman. It’s a great game for friends and newcomers! Sure it takes hours, but it’s time well-spent with your friends with some imaginative adventure and funny misadventures. I’ve been playing it since college and I will play it into the future as long as I find willing players. Give Talisman a go if you get the chance; revisit it if you have it!

For years we have been saying that “Winter is Coming”, well it has arrived as a winter vortex that is gripping many regions of...

While 2020 has created many challenges for industries of all forms, few industries have seen the same kinds of impacts faced by the convention...