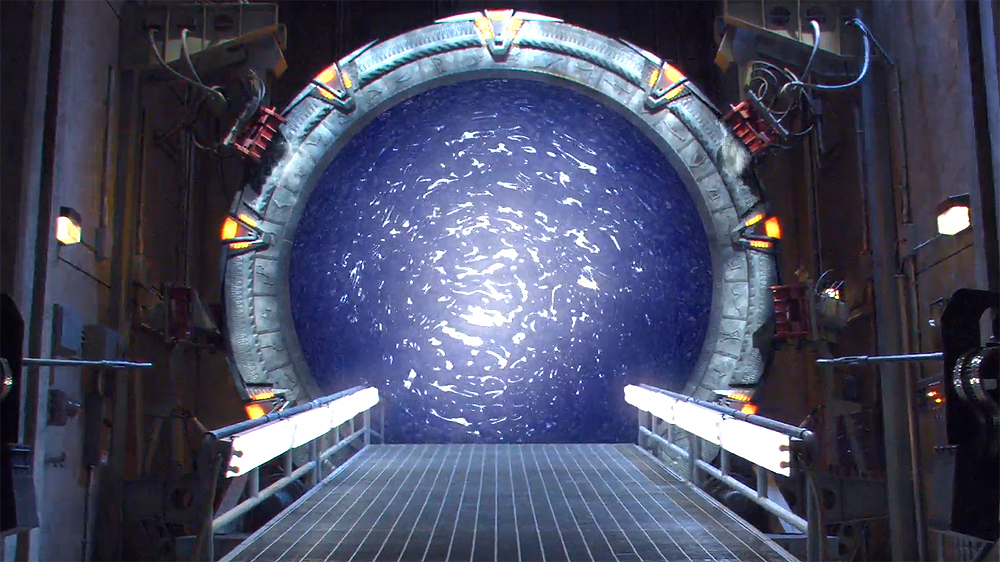 Although the Stargate Universe isn’t getting a reboot anytime soon, there are always fantastic moments of the series, movies and spinoffs to revisit and have a good laugh at or a thrilling experience knee-deep in drama or a battle. Let’s travel through this wormhole and back to the ten awesome moments of the Stargate universe.

10). Meeting Teal’c. Teal’c is the First Prime of Apophis, an equivalent of a top general in an army. He is also Jaffa, a race of aliens that require a parasite to act as their immune system to survive. Although Teal’c had been Apophis’s First Prime for years, taking part in horrific killings of innocents all in the name of Apophis as well as allowing innocent people to be taken and forced into becoming hosts for the Goa’uld, he betrays his entire race for the SG1 team. Right before he kills the team, when Jack O’Neil claims that he can save the prisoners there, Teal’c whips around and says, “Many have said that.” With a pause, he turns around and shoots one of his own soldiers to defend the prisoners and stand with O’Neil with a triumphant “But you are the first I believe could do it.” It’s a huge character moment for the once First Prime. He completes the SG-1 team.

9). Defeating the Ori; Stargate: The Ark of Truth. In one of the two Stargate SG-1 movies, the team has to defeat the Ori, a group of ascended beings that feed off of people worshiping them. They claim to be “gods,” much like the Goa’uld had, only they are beings of energy and they have these loyalists called Priors that spread their faith base. Knowing that ascended beings are not gods(Daniel Jackson was ascended twice) the team is dragged into the pits of the Ori’s base where they have to face them head on. The only way they can defeat them is to show the truth the Ori had been hiding from the Priors; that they aren’t gods at all. All Priors are connected, so with a crazy chain of events, the team opens the Ark of Truth, showing it to a Prior and ending the worship of the Ori for good. Without people worshiping them, they lose their immense power, which allows Morgan Le Fay, an ascended being able to defeat the Ori once and for all.

8). “Groundhog Day;” Stargate SG1. Teal’c and Jack O’Neal tackle a fun sci-fi version of Groundhog Day, where they are stuck reliving the same day over and over again. They try to figure out how to break free as well as convince the others teammates what’s going on. After the two figure out that can do whatever they want without any consequences, the episode takes a quick turn down laughing lane and turns it into one of the funniest episodes of the whole franchise.The reactions and fun actions such as Teal’c getting slammed in the face as well as O’Neal “retiring” to kiss Samantha Carter, riding bikes in the middle of the base halls and playing a game of golf into the Stargate, make it one of the best moments of Stargate.

7). Teal’c vs Ronan; Stargate Atlantis. Before Jason Mamoa became the king of Atlantis, he was first the “Teal’c” character equivalent on Stargate Atlantis. In one of the episodes, Ronan and Teal’c meet and don’t get along very well. Ronan postures a lot. Teal’c ends up having enough. Teal’c is one of the ones evaluating Ronan to determine his future with the Atlantis team. Their reactions only get worse when a simple sparring match turns into a full on fight that lasts over an hour and has the crew of the Atlantis base cheering in a circle around them, just like a classic high school fight. The members of the base even exchange bets on which character will win. Even though the fight is broken up by Samantha Carter, the team still ends up passing around wads of cash. It’s always exciting to see crossovers and to see Ronan and Teal’c going head to head had me rolling on the floor.

My bet would have been on Teal’c.

6). O’Neal Meets the Asgard; Stargate SG-1Before you ask, no. In this series, the Asgard are not a bunch of Chris Hemsworths and Tom Hiddlestons. They are the classic aliens we all see in Roswell, New Mexico, only, they are pinkish, not green. After O’Neal has an ancient database downloaded into his head, slowly killing him, O’Neal builds a boosting device for the Stargate that takes him to a completely different galaxy. He goes through and meets the Asgard. They help him by removing the download and saving his life. Although the Asgard don’t help the team until much later, it introduces the very valuable allies for later episodes and seasons.

5). Battle of Antarctica; Stargate SG-1. At the end of season 7, the SG-1 team desperately search for an ancient base in Antarctica full of alien weapons they need to stop the upcoming attack of Anubis. While the team races to use these weapons, they are aided by the first Earthean ship called Prometheus as well as the first Earthean spaceship fleet. In a fantastic battle with fast paced music and an awesome battle much like in Star Wars, it’s one of the coolest moments of the franchise. The episode also sets up Stargate Atlantis, as the base they found in Antarctica wasn’t the lost city of Atlantis. Eventually, O’Neal manages to activate the weapons, destroying Anubis’s forces and saving Earth once more as well as defeating the villain, Anubis.

4). Teyla becoming a wraith queen; Stargate Atlantis. The badass mother, alien and soldier of Atlantis, is offered an amazing opportunity. After the Atlantis team makes a shaky alliance with a wraith called Todd, the alien offers the chance for a wraith alliance, effectively making peace with the wraith once and for all. Teyla is a descendant of a race of alien that was experimented on by the wraith to make their prey “tastier,” which caused her to have some wraith DNA in her body. This also gives her the telepathic abilities of a wraith queen. She is able to control and sense wraith attacks. With much plastic surgery, she is turned into a wraith queen. After Todd kills the perilous queen, Teyla takes her place and leads an alliance. It’s a fantastic episode, which had me at the edge of my seat the entire time. Even though Todd had other plans, to take control of a wraith fleet and get rid of competition, Teyla controlling an entire wraith ship as well as becoming a viscous, badass queen makes it all worthwhile. Don’t worry. She gets changed back when everything is said and done.

3). Daniel Jackson’s Death/ Ascension; Stargate SG-1. Spoilers! After Daniel Jackson gets exposed to deadly amounts of radiation, he slowly dies from radiation poisoning. A powerful being that he met in his past comforts him during this time, offering a solution; to ascend to a higher plane of existence. In previous episodes, it is mentioned that specific beings can “acend,” or turn into energy. This moment is very powerful for Jackson, as it shows how strong he his mentally and emotionally. This is also the first “death” of an original cast mate. He does return, but much later during the struggle with Anubis. His final goodbye to O’Neal still brings tears to my eyes as O’Neil simply states, “See you around.”

2). Battle of Asuras; Stargate Atlantis. Replicators become a huge threat to the Pegasus galaxy, even after the Stargate SG-1 team obliterates them in the Milky Way. The people of Atlantis desperately put together a shaky alliance with Earthean ships, local alien groups of the Pegasus Galaxy and even their worst enemy up to that point; the wraith. The goal is to distract the replicators long enough to where the team can get in and place a device that causes the planet to implode on itself. It’s action packed music, visuals and dialogue had me sitting on the edge of my seat the whole time, especially since the wraith were working with humans rather than against them. It tackles the whole “enemy of my enemy is my friend” idea, but with life-sucking aliens and killer robots.

1). Replicators and Goa’uld defeated; Stargate SG-1. The team is separated with the deadly enemy, the replicators, on the loose in the galaxy. They ally themselves with their previous enemies, the Goa’uld and their Jaffa warriors. Although the team is separated, it shows how they work together, and how they use their personal strengths to save the galaxy again. O’Neal is leading the stargate command. Carter is trying to create a super weapon to take the replicators down all at once. Teal’c leads the Jaffa against the replicators in orbit and Daniel Jackson fights a battle of wills against a replicator duplicate of Carter. As shown earlier in Daniel Jackson’s ascension, he is able to use his mental strength to control the replicators long enough for the real Carter to fire the super weapon. The super weapon works, being shot through every stargate in the galaxy and wiping out the replicators forever. In a final deafening sweep, the Earthean troops whip around to finally defeat the goa’uld and the replicators in one shot. Daniel Jackson actually ascends a second time after the replicator ship he’s on gets destroyed. With a fantastic ending, where the Jaffa are freed and the replicators are gone, one of my favorite lines is said. As the Goa’uld, Bal, is held at weapon’s range, Bra’tac, Teal’c mentor, says, “Behold. Your false god.”

Stargate SG-1, Stargate Atlantis, and Stargate Universe are all on Hulu and Amazon Prime Video. Grab your chevrons and catch up on the series, watch your favorite moments, and dive head first into the universe not so far away.

Make sure to check out the GNN Facebook page for more geeky news and stories!

In this article:Emma, opinion, SciFi, Stargate