A Rey of Hope - Star Wars vs Star Trek 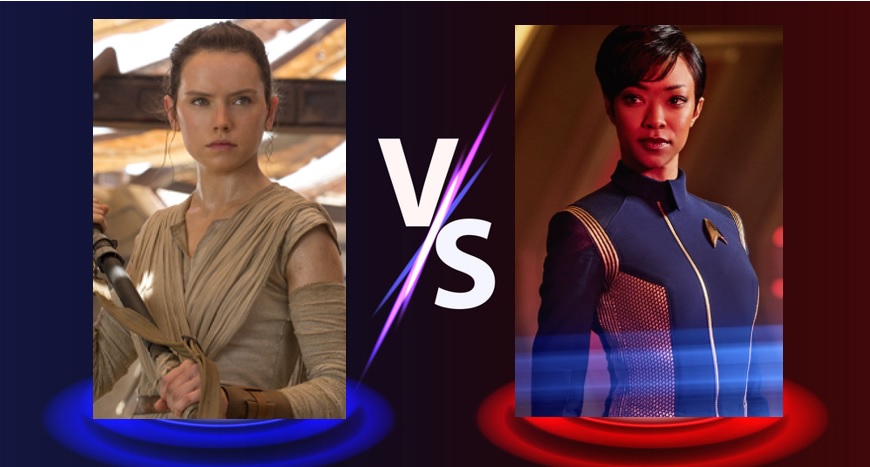 Star Trek and Star Wars are fandoms that are rivals to the core. At San Diego Comic Con, these verses face off against each other in a series of debates to see which universe is the most logical. Now, we all know that Star Wars is the best, but it doesn’t hurt to listen to what the other side has to say. In the red corner, Dr. Ali Mattu (The Psych Show) paired up with Jennifer Muro as Team Trek. Team Wars was represented by Dr. Drea Letamendi (Lattes with Leia) and Todd Stashwick.

Several different topics were delved into. Mandalorians and Klingons have a sense of honor and a code to live by. Luke Skywalker and Jean-Luc Picard faced off in a battle of emotional intelligence. There was even a competition to determine whether the sequel trilogy or the Kelvin timeline better represents current day life.

The debate that hit me the most, however, was Rey vs Burnham. These two characters represent resilience in their respective universes. Both have their own share of challenges to meet, but I must side with Team Wars on this one.

Looking to the horizon – courtesy of starwars.com

Rey Skywalker is a character at the center of much debate in the Star Wars sequel trilogy. Many, including myself, view her as a “Mary Sue” character. She is given everything and has few flaws, if any. Even listing her as a Skywalker is sure to stir a gundark nest. In the debate of Rey vs Burnham, Dr. Drea Letamendi attempted to make us see Rey in a different light.

Rey was abandoned on Jakku as a child and was forced to adapt to survive. She became a scavenger to make ends meet. During her time there we see her begin to embody resilience. Being alone on a backwater planet comes with many hardships, and she is forced to cope with them mentally and emotionally. Despite all this, she is competent. She has a strong spirit and maintains her self-confidence and integrity. There is even a sense of joy and content that Rey displays on Jakku. Ultimately, though, she struggles with discovering who she is and who she belongs to.

When Luke looked out to the horizon, he was yearning for adventure and looking to escape his family. Rey looked out to the horizon in search of family and belonging. As her story progresses, she finds a family with the Resistance. Leia, Finn, Poe, and even Luke all become part of the family she so desperately seeks. This sense of family fortifies her. When she does find out the truth of her real family, she is able to stand at the end and face the darkness associated with that truth.

In contrast, Michael Burnham represents resilience for Team Trek. She lost her parents and was raised on Vulcan. Being a human there, she was forced to endure a certain level of discrimination.  Her resilience is displayed in standing by her decisions as well as in her ability to think differently and adapt.

I jest. In truth, the debates between Team Trek and Team Wars were very well done, and I learned a lot about the psychology of each universe. Both verses have their own challenges to overcome and their own lessons to learn. As fans, we can all learn something from both verses.

As for me, I learned to have a better respect for Rey as a character. I still believe she isn’t written very well. However, I can see her under a different light and can better empathize with her. Rey holds on to a sense of hope, and thus brings hope to the galaxy. Perhaps she isn’t such a “Mary Sue” after all. Maybe the sequel trilogy wasn’t so bad.

Let’s not get carried away, now!

I would love to hear your thoughts on this, as well as on the other debates. If you didn’t get a chance, be sure to check out the panel. Then stop by our Facebook and Twitter and let us know where you stand.

Until next time, stay geeky my friends.