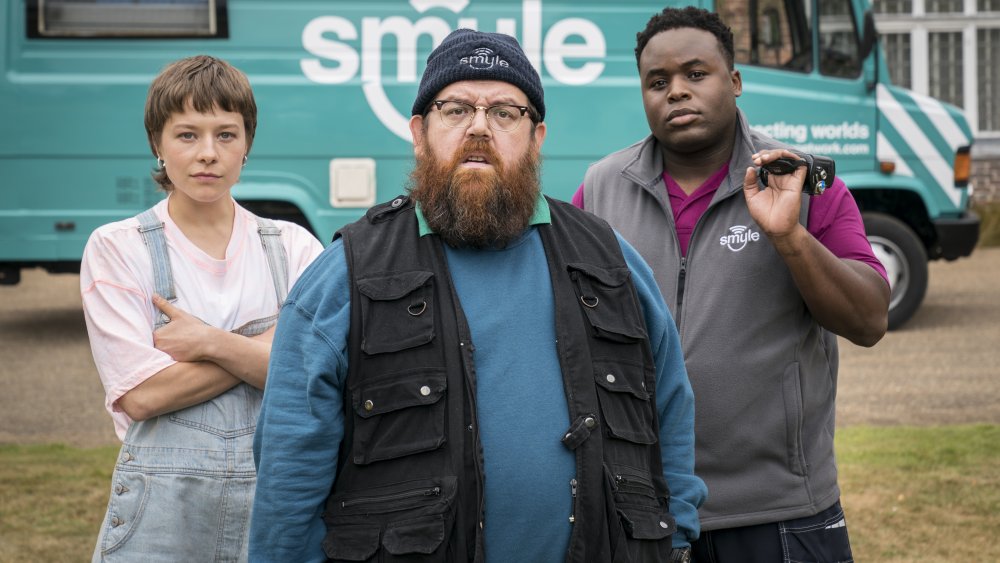 From the guys who brought you Hot Fuzz, Shawn of the Dead, and Paul, comes a new series that’s promising “The Truth is Way, Way Out There.”

The first trailer was released today during the panel and now, you can watch it here:

During the Comic Con at Home panel discussion, moderated by Empire magazine’s Chris Hewitt, Pegg, Frost along with co-writers James Sarafinowicz and Nat Saunders, discussed the early brainstorming about coming up with the ideas of the show of amateur paranormal sleuths who accidentally stumble on a series of events that might lead to a world apocalypse.

The initial stages involved pouring over shows like Arthur C. Clarke’s Mysterious World and Mysterious Universe, as well as Usborne Book of Ghosts and The X-Files series.

“We needed to figure out how could we harness our obsession with all the paranormal in a show.” Nick Frost explained the characters Gus, played by Frost, couldn’t have any sort of fancy job. “We thought, we’ll have them (characters) work as broadband installers, the most boring job ever.”

(Moderator Hewitt joked that if it weren’t for the broadband types, Comic-Con at home wouldn’t have the ability to have this panel.)

The series covers a group of part-time ghost hunters “who wish to be taken seriously,” Frost adds as well as explains his character. “Gus, is alone. He’s lost a loved one and hopes to see her again in some sort of realm.”

The eight episode series has the balance of horror and comedy as the Frost/Pegg creative team have done so well with movies like Shawn of the Dead and Hot Fuzz.

Asked by moderator, Chris Hewitt, if the balance was difficult to write, Pegg explained the task wasn’t difficult to combine the two genres if you keep in mind “not to make fun of the horror. The key is to take the horror rather seriously and let the comedy exist adjacent to it.”

Before penning this series with Saunders and Serafinowicz, Frost and Pegg have done their share of ghost hunting, many times going to old churches and knocking on the doors.

Frost remarked, they did use abandoned and potentially haunted places for sets.

As he wrapped up, Hewitt asked the panel if they believed in the paranormal and aliens. Pegg answered, “No ghosts, but I do believe in aliens but not UFO’s.”

Laughing, Hewitt questioned, “but how do they get here?”

Pegg replied, “I believe they are out there but they don’t transport.”

You can check out the entire panel discussion at the Amazon Prime Video: Truth Seekers or hop on over to Comic Con International’s YouTube channel.

Are you a fan of the paranormal? Cyptozoology? UFO’s?

Got a story to tell us about? Drop in the comments below.

Since that first episode aired in March 2013, fans followed the lives, battles, deaths, and victories of the Lothbrok clan, but the midseason shocker...

Star Trek: Better As A Series?

Will Star Trek ever make it back to theaters or is it destined to stay on television/streaming? It’s been four years since we’ve had...