Recalling A Mind-Bending Sci-Fi Film! A Review of "Total Recall"! 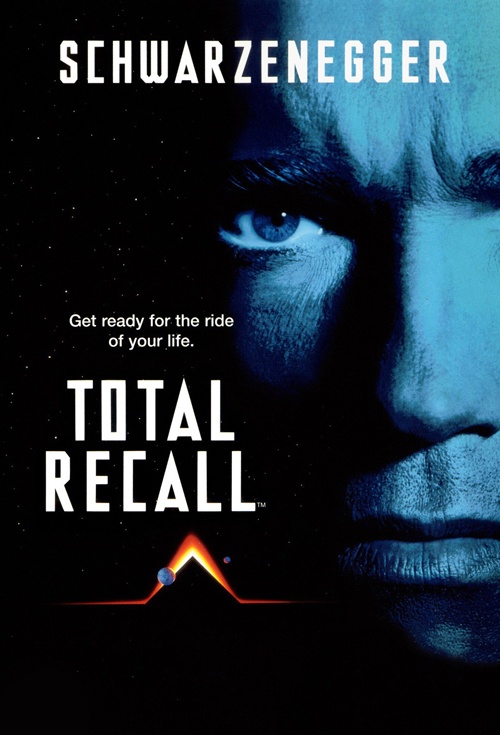 Total Recall (1990), an incredible sci-fi action adventure starring Arnold Schwarzenegger, asks viewers one important question: did the events of this movie really take place, or was it all a dream? After careful examination, I say the majority of the movie was a dream.

In Total Recall, Douglas Quaid (Schwarzenegger) is a mild-mannered construction worker who dreams of more in life and often this dream involves the planet Mars. His wish is granted when he follows an advertisement and visits the Rekall establishment; which trades in implanted vacation memories and sells Quaid an experience as a secret agent who essentially travels to Mars and saves the day after battling bad guys and meeting an alluring woman.

I grant there’s evidence to suggest it could have been real; such as when Dr. Edgemar (Roy Brocksmith) claims it is all a dream but Quaid catches him sweating in nervous fear and decides the adventure really is happening.

Heck with that; there is plenty of sufficient evidence that it is still a dream.

Are the Rekall model (right) and character Melina somehow the same person? Or is Melina (Rachel Ticotin) just a product of Quaid’s dream? Picture credit to scifi.stackexchange.com

At Rekall, before they put Quaid to sleep for memory implant, they go over specific options of visuals and details which will be part of the experience Quaid remembers. Among the visuals is the very clear picture of a beautiful woman Quaid selects from personal preference who later turns out to be Melina (Rachel Ticotin), member of the Mars rebellion and girlfriend of Quaid’s “real identity” Hauser. An exact match to the Rekall model? Come on; the odds are not that high!

Among the other Rekall trip “alien artifacts” options include the terraforming engine almost exactly as seen in the Pyramid Mine when Quaid finally gets there; shoot, even the lab assistant who helps put together the Rekall vacation muses over a trip scenario when he says “That’s a new one; blue sky on Mars!” The movie ends with a blue sky and atmosphere on Mars! Again… the odds!?

Douglas Quaid (Arnold Schwarzenegger) as he is about to receive his vacation memory implant at Rekall. Picture credit to moviesandscience.com

Consider that the whole adventure picked up for Quaid almost immediately at Rekall. Everything worked out all-too-neatly for him afterward: the sudden adaptability to great feats of action, for instance; or crooked cab-driver Benny conveniently showing up at just the right times (even after the reveal of his working for lead villain Cohaagen). Also, how did Quaid’s work pal Harry know for a fact that he went to Rekall after all, despite the latter man’s objection, and get a specific “trip to Mars”? A bit too well informed to not be the logic of a dream!

As put by Edgemar there are the factors like the suite at the Hilton, the trip to Mars, the action-laced chases and escapes, being a secret agent… All options from the vacation package which came true for Quaid in the course of the adventure in one form or another. Also, it’s a bit too “coincidental” that Edgemar himself, seen before the Rekall visit in an ad for the company, would show up under Cohaagen’s direction to convince Quaid it’s a dream.

Dr. Edgemar (middle) trying to talk down Quaid from his dream world at the Mars Hilton. Picture credit to reddit.com

Ready for the grand finale of clues? Edgemar outlines the movie’s third act: he says “the walls of reality will come crashing down” and, upon his death, the hotel wall explodes. “You’ll be the savior of the rebel cause; and the next thing you know, you’ll be Cohaagen’s bosom buddy” and it is revealed that “Hauser” is the lead villain’s best pal. “You’ll even have fantasies of alien civilizations” to which Quaid later experiences a vision of the Martian reactor under mutant Kuato’s psychic guidance.

Hey, look, I know this is all the plot of a big action flick with Arnold Schwarzenegger and wild, fantastic things are bound to happen which would never happen in real life and yet most such movies are set in their own version of reality; but the clues in this movie are hard to ignore! You’d have to be memory-wiped of the facts to miss them! We may never know the truth as director Paul Verhoeven made the movie ambiguous in regard to reality or dream; but everything that happens to Quaid after being put to sleep at Rekall is, in my opinion, a dream. This, however, doesn’t keep Total Recall from being an ultimate thrill-ride of sci-fi action adventure!

I just feel bad for Quaid; if it is a dream, then it means by the end he’s lobotomized.

“Mortal Kombat” (2021) was the most faithful videogame-to-movie adaptation I have ever seen, but also one of the worst films I believe will come...