The Black Cauldron: The Movie That Almost Killed Disney Animation 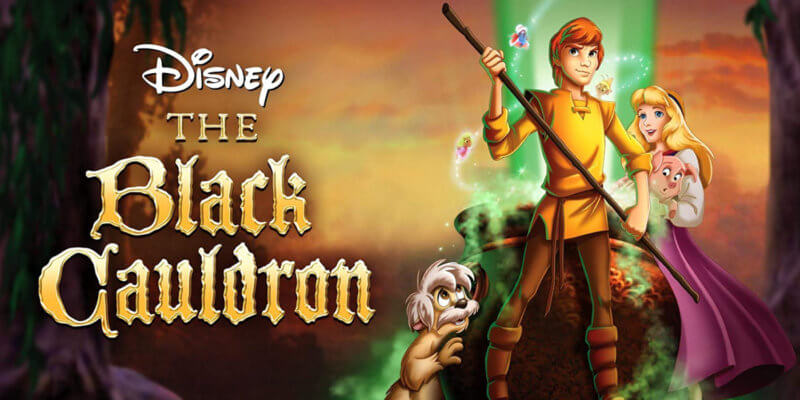 “I hadn’t planned it to end like this, Eilonwy.” Fateful words spoken by Taran, “The Assistant Pig-Keeper.”  No truer words than what came of the 1985 animation flop, The Black Cauldron.  Many things went into this disaster of a movie. 35 years later and we are taking a look back at this infamous tale.

Disney struggled to stay on budget and  it took close to five years to produce. If you know Hollywood, time is money. The initial budget, as reported by slate.com, was $25 million.  When everything was done the budget ended up being revised to $40 million ($95.3 million with inflation). The total gross when the movie came out, taking inflation into account, was $50.7 million ($21.2 million in 1985).  It did not even make back the budget in total box office grosses. It came in fourth during its opening weekend behind movies that had been out for a week to a month (E.T, Back to the Future, and National Lampoon’s European Vacation).

Then they had a number of staffing issues. Slate.com reported that Don Bluth (Pete’s Dragon, Winnie the Pooh, Sleeping Beauty, The Sword in the Stone, etc), the “star animator” of the Disney animation team, quit in irritation and frustration with studio chief Ron Miller pushing back the production of The Black Cauldron and took with him 13 other animators.  Now short 14 staff members, they had to rely on the few veteran animators and the largely fresh out of CalArts animators that now made up their animation team.

Then in 1982, there was a strike among animator’s that lasted 10 weeks!  The next staffing disaster came when they changed company chairmen with Miller being replaced by Michael Eisner and his studio chairman Jeffrey Katzenberg. Neither man knew much about animation.  Cauldron was Katzenberg’s first movie as studio chairman and he definitely left his mark on it cutting out “several minutes” and “replacing songs he considered ‘old fashioned’” but even that didn’t help the film, as reported by collider.com. He and producer, Joe Hale, battled over the edits ending in Hale’s termination from the company. I am sure there were more instances of head butting but those are just a few of the problems.

Bluth quits, animators leave in droves, Hale is fired, and new bosses are meddling. It’s a recipe for disaster nearly 1800 days in the making.

The Black Cauldron is based off of a five-book series called The Prydain Chronicles by Lloyd Alexander.  The movie was named after the second book of the series and yet the film took elements from the first two and crammed them together. Another ingredient in the recipe if you want to make a box office bomb from a book series.

The film itself was dark, really dark, Tim-Burton-felt-inspired-by-this-dark. Maybe too dark for the 80’s and for children.  The image of the horned skeleton king is definitely one of young children’s nightmares for sure. Parents did not want to take their kids to a film that would terrify them and the teens didn’t want to see a Disney movie.  Let’s face it, if a teen could go see ET or Back to the Future versus The Black Cauldron, they’d be more inclined to see the one that is not a cartoon. Disney hoped this darker approach would appeal to teens according to slate.com.

They were mistaken.
Very mistaken.

Needless to say, a remake of this great book series is definitely needed.  According to Variety.com, a remake of the whole series is possible as reported on March 17, 2016, a Chronicles of Prydain movie is in development at Disney. It has been confirmed to be live-action by insidethemagic.net.  No other information is known at this time.