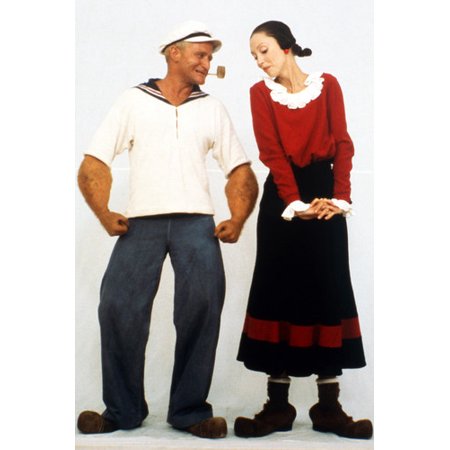 A long, long time ago, in the same year we heard the immortal words, “Luke, I am your father” and Queen blasted our eardrums when they sang, “FLASH! AH-AHHHH!” another greatly anticipated film also hit the silver screen.

The film adaptation of E. C. Segar’s beloved comic strip and cartoons starring, Robin Williams, a star on the rise and Shelly DuVall, an actress “born to play the part” had everyone on the edge of their seats.

The perfect casting Williams as the iconic enlarged, forearm sailor who “never told a lie” and DuVall, as the always flustered, loves-her-man, Olive Oyl, should have been a slam dunk hit as the creators stuck with the basic storyline of what so many of us knew.

Popeye’s a good guy.
Bluto’s a bad guy with a limited vocabulary, abuse tendencies, and anger issues.
Popeye wins Olive Oyl’s heart and they make a life with Sweet Pea, the orphaned baby they both care for.

When asked to write about this film, I’m sure it had to do a bit with my age versus my vast knowledge of film trivia because I had a far higher chance of having seen this movie in the theater than many others on the writing team.

Fair point and true as I had very mixed feelings when I walked out of the cinema that day.

Although the story had a decent visual adaptation of the comics and a few memorable tunes like Olive Oyl’s “He’s Large” and the sweet lullaby Popeye and Olive Oyl sing to orphaned, Sweetpea, “Stay with Me”, the film didn’t bring in the numbers the studio hoped nor the audience’s and critics’ approval ratings, including mine.

Still, watching it again I loved the adoption storyline as I’m always a sucker for adoption stories, but I’m also a sucker for great movie trivia tidbits that make the story a bit more fun. Knowing these ten things makes my trip down memory lane a bit sweeter.

(1) Because the character had a missing eye and always held a pipe between his teeth, enunciation didn’t come easily, plus, Popeye always mumbled.
Difficult to project when you mumble, which (to me) muted Popeye’s on-screen presence.
Interestingly, director Robert Altman held his actors on short leashes and this thwarted Williams’ propensity to go off script. This might have stolen a bit of Williams’ natural over-the-top energy that fans expected after seeing him on his standup shows and every Thursday night on Mork and Mindy.
In post-production, Williams did go back and dub so he could be more easily understood, but his natural ad-libbing was not included.

(2) The town of Sweethaven where Olive Oyl lived with her family, took seven months to build and a big chunk of the $20 million budget.
Filmed on the island of Malta, the set went above and beyond what the studio envisioned. It included buildings (housing) for the staff and recording/editing studios.
With its disjointed streets and brightly colored storefronts, Sweethaven Village or Popeyetown, now has character meet and greets, short skits, stores, restaurants, and tours. Located two miles outside the town of Mellieħa, the town is busy year round and is listed as #8 on TripAdvisor’s Things to do in Malta

(3) Because she’d been cruelly referred to as Olive Oyl growing up, Shelly Duvall almost didn’t take the role. Lily Tomlin had already been approached about the role, but dropped out. (Lucky for us, she did because she starred in, 9 to 5, one of the top 10 movies of 1980.) Only when director Robert Altman (The Player, Gosford Park, M*A*S*H), who’d worked with DuVall on six previous films, asked,  she finally accepted.

(4) In an interview with film critic, Roger Ebert, DuVall confessed she truly enjoyed working with Williams, especially after the exhaustion of filming The Shining and working with Stanley Kubrick’s intense directing style.
Watching the interaction between DuVall and Williams, again, reminded me of why the movie is a bit of a hidden treasure. The chemistry between Williams and DuVall couldn’t be cuter.
Popeye’s all agog about her, she’s nuts about him and both are a bit timid to admit to to the other for most of the film.
Ironically, Williams had been strongly considered for the role of Jack Torrance, the tormented and psychotic writer in The Shining, so it appears DuVall would have worked with her comedic leading man in some form or fashion.

(5) Pac-Man and Popeye have something in common. Seeing Popeye’s strength increase when he devoured a can of spinach, Pac-Man’s game creator, Toru Iwatani combined that with the Japanese of life force or Kokoro to come up with the power pills that Pac-Man munches to defeat Blinky, Inky, Pinky, and Clyde. (BTW-Pac-Man is also 40 years old this year.)

(7) Sweetpea, the adorable child who brings Popeye and Olive Oyl together was played by Robert Altman’s grandson, Wesley Ivan Hurt.

(8) With budget of $20 million, the movie grossed $6 million its opening weekend and $32 million its first month. By the time the dust settled, it grossed more than $60 million, more than paying for itself. Sadly, distributors Disney and Paramount hoped for a HUGE box-office draw and considered the film a flop. Panned by many critics as a mess of a story, the reviews of DuVall and Williams were favorable with At the Movies critics Gene Siskel and Roger Ebert each giving the film 3.5 out of 4 stars.

(9) This would be DuVall’s last film to work with Altman, but while working on Popeye with Altman, (Monty) Python Terry Gilliam, offered her a role in the upcoming, Time Bandits. When she hesitated, Gilliam sweetened the deal. Knowing DuVall was a big fan of Sean Connery, he told her the original 007 would also be in the film. She immediately accepted, but never met Connery on set as they had no scenes together. In later interviews, she laughed at Gilliam’s devilish sense of humor.

(10) A few years before offering DuVall the role of Olive Oyl, Altman asked her to be in his movie, The Wedding. She turned it down, but the role went to another actress, Pam Dawber.
Long before he we heard him as Aladdin’s Genie, The Fisher King, or before he won an Oscar for Good Will Hunting, Williams made people laugh on stages across the country during his stand up and every Thursday on the comedy, Mork and MindySoon after, Pam ended up on my TV every Thursday night, playing opposite of Robin Williams as Mindy McConnell in Mork and Mindy.
Another tidbit about Pam Dawber, for over thirty years, she’s been married to NCIS’ Leroy Jethro Gibbs, Mark Harmon.

Like any movie we watch as kids, we don’t process all the tiny clues and stories a the time.
Reviewing the film some many decades later, I realize how much I missed the first time around.

Don’t get me wrong, this film is still a disjointed mess.

The structure of the town makes no sense.

The townspeople are what happens when the gene pool is too shallow.

Bluto needs serious anger management therapy and jail time for destruction of property and multiple cases of assault, but the characters stayed within the realms of the comic strip created in 1929.

Even with all that, the sweet moments and the tender story of Popeye, Olive Oyl, and Sweetpea make the movie worth a watch. Two adults who each wanted to find their person and a baby who gets his forever family.

Like I said, I’m always a sucker for an adoption story.

Be sure to head back to the home page and subscribe to get the latest information about movies, upcoming projects, fandom, and comic-cons.

You read that right: “the original 1982 cut of E.T. the Extra-Terrestrial is better than the 2002 re-release!” Sometimes digital fine-tuning and additional footage...