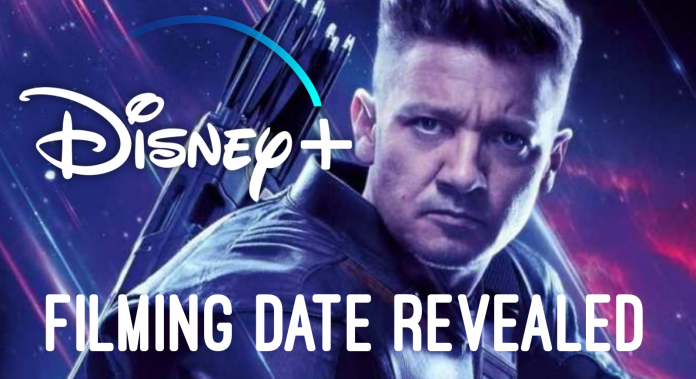 “I’m starting to root for this guy.” Ever since he appeared as a cameo in the first Thor movie, fans have been eagerly awaiting some serious Hawkeye content. Today, nine years later, we learned when that wait will finally come to an end.

Many people have been asking for more Hawkeye and for him to get his own standalone movie considering his is the only character in the original six to not have his own movie. We have wanted more Hawkeye.  With Black Widow due out in November, Hulk having a movie out in 2008, Captain America with many movies, Iron Man with three, Thor soon to have his fourth, it is time for Hawkeye to get his own spotlight.

According to Disneyplusinformer.com, Disney+ is moving forward with a Hawkeye series for the platform. The series is scheduled to start filming in Atlanta at Pinewood Studios in September!  First reports show that this series will have our favorite Hawk, Clint Barton played by Jeremy Renner.  Renner has played Clint throughout the MCU.

Movieweb.com has released a recent study that shows that Hawkeye is the MVP among the members of the Avengers.  In the report it states “Hawkeye has appeared in six MCU installments to date,” and has a higher ROI than Captain America and Iron Man!! The ROI’s in the article were determined by the ROI for each movie they starred in based off budget and total grosses then averaged out. I don’t agree with the results from the poll completely but everyone has their own opinions and this particular poll was based off of appearances in films.  Personally I would have put Star-Lord farther down as well as Captain America, Thor, and Iron Man higher up.  I would have also put Fury further down. Poll Results below.

As Cinemablend reported, He was originally going to have his own movie.   According to Disneyplusinformer.com, Disney+ is moving forward with a Hawkeye series for the platform instead of him getting a movie. The series is scheduled to start filming in Atlanta at Pinewood Studios in September!

First reports show that this series will have our favorite Hawk, Clint Barton played by Jeremy Renner.  Renner has played Clint throughout the MCU. It is currently titled Hawkeye. Our beloved Clint will be costarring with a new face in the MCU. Kate Bishop.

*For those that haven’t seen Endgame, spoilers are following this statement.

With the recent, tragic loss of Black Widow in Endgame, Hawkeye was left without a partner.  Enter in Kate Bishop.  If you don’t know her story, she eventually becomes the partner for Hawkeye.  Kate is a member of the Young Avengers and is a fellow archer.  She gets her start with the daughter of Ant-man, Cassie Lang.  They search for the Young Avengers and find them at the ruins of the Avengers Mansion.  Now, I know that there was one such mansion destroyed in you guessed it, Endgame.  After helping in the saving of the Young Avengers she becomes a permanent member.  She eventually took on Clint’s code name, Hawkeye, before joining him in an action packed adventure.

The story line of the show is unknown at this time.  All that is known is that it is set to release in 2021, but Collider.com has it as a late in the year release.

Rumored to play Bishop is Hailee Steinfeld, known for Bumblebee, Pitch Perfect, and Ender’s Game.  She can easily play this role and play it well. Clint Barton will still be portrayed by Renner.  No other cast is known at this time, but as soon as it breaks, we will report on it.

Be sure to follow Geek News Now on Facebook and Twitter and let us know what Disney+ Marvel series you’re looking forward to or tell us one you think they should make?

Star Wars Gets The Anime Treatment

Star Wars fans have been clamoring for a Star Wars anime since the days of that Tie Fighter short film hit YouTube. Well Disney...