Review: Artemis Fowl - What Did I Just Watch? 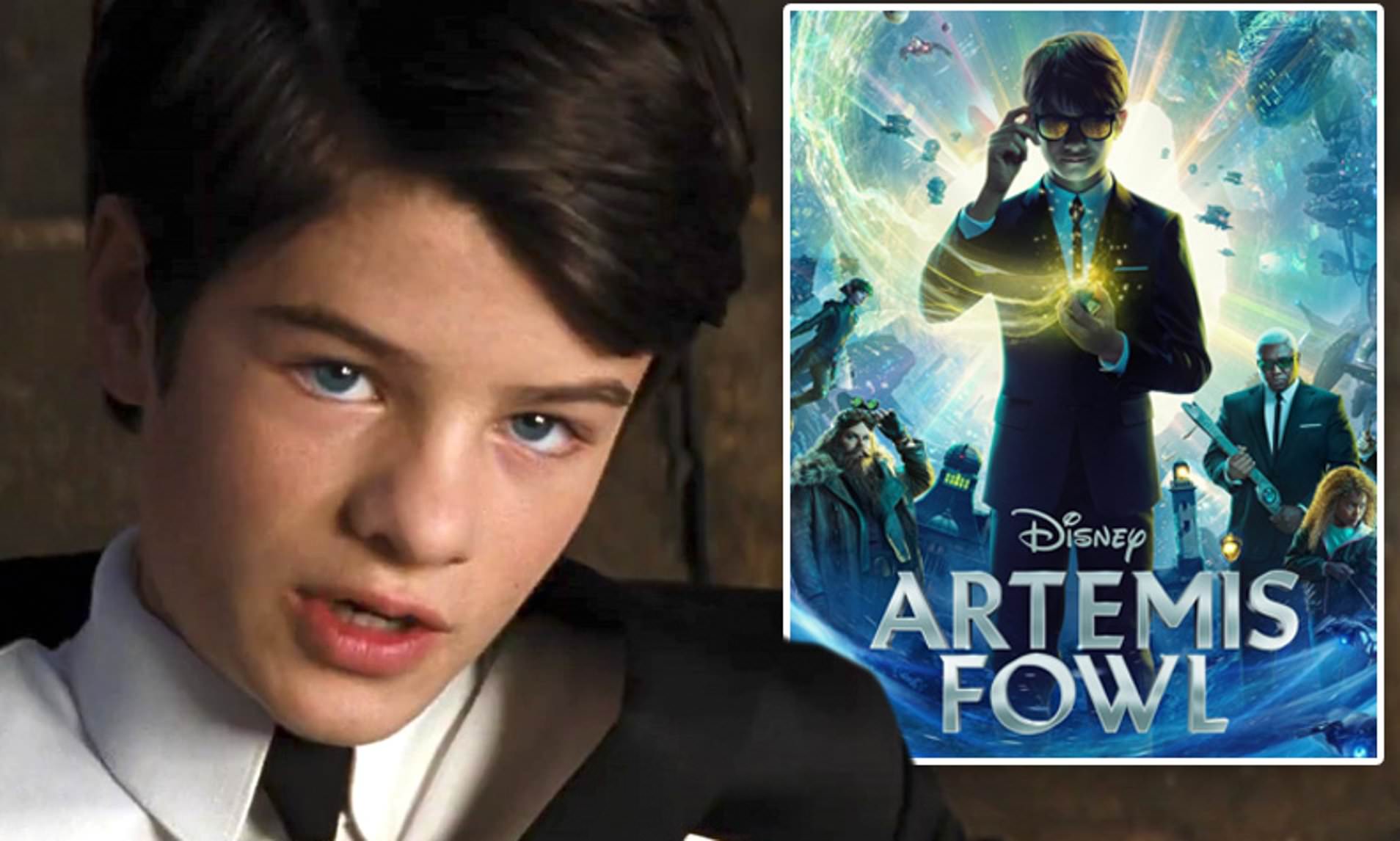 Kenneth Branagh is an Oscar-nominated legendary actor, terrific writer of song lyrics, and has directed films such as Thor, Murder on the Orient Express, and Jack Ryan: Shadow Recruit.

So as the credits rolled for his latest work, Artemis Fowl, I offer up one question. “What happened?!?”

Please bear in mind that I have not read the Artemis Fowl series of books (although I hear high praise for them) so this review will NOT compare the film to the books…and that’s probably for the best.

This $125 million film ($925,000 per minute of screen time) lacks direction, lacks character development, lacks a cohesive plot, and offers up FAR too much exposition and “tell don’t show” while at the exact same time hardly any at all. It really was a brilliant masterpiece of making me say “what? huh? how did…but then when…why…?” and yet hammering me with narration almost a full hour into the less than two hour movie.

Want to know more? Of course you do! But beware, this is the end of the non-spoiler portion. Read on at your own peril.

Let’s start by talking about the characters, which are probably one of the most fundamental aspects that make a movie successful. These characters? Fully 40% of the main cast is 100% useless. “The Butler” (Nonso Anozie is sadly wasted here) and his niece (Tamara Smart)do very little other than follow Artemis around. Our Butler has one fight scene and spears (I think? Hard to tell) a troll with a set of bull horns, but that’s it. The niece is introduced in a badass way, but has absolutely zero impact on Artemis, the story, the fairies, the MacGuffin, or the audience as a whole.

Oh how I wish I were exaggerating.

The villain stayed in the shadows the entire film and also has zero impact on the story except to jump-start a rather confusing series of events. Don’t worry, I’ll get to that soon.

Josh Gad makes two different appearances in this movie and appears to be the only actor in the entire production having a good time and truly throwing himself into his character. Playing a tunneling, slack-jawed dwarf for most of the picture, he’s our part time comic relief. However, he also is our narrator whose voice comes eerily close to imitating Christopher Lambert’s portrayal of “Raiden” in the 1995 Mortal Kombat movie. Seriously, close your eyes when you hear him speak and you won’t tell the difference.

At least Josh Gad was having some fun in this film. Image from Disney.

As far as the story goes, buckle up and try to follow this series of most unfortunate events. Aretmis’s father (Colin Farrell) is kidnapped and the villain gives Artemis Fowl just three days to cough up the Aculos, our MacGuffin for the film, or else daddy is fairy dust. The villain is banking on the fact that daddy ended up telling his kiddo all about the magical world of fairies, trolls, dwarves, etc. Had Artemis been just another kid or stuck in a boarding school, our villain would be out of luck.

So now Aretmis concocts a plan based on research he’s done and is 100% dependent on a fairy just happening to show up on a specific hill he’s camped out on. He only has three days so he better hope this hill is the equivalent of Grand Central Station. Well waddya know? A fairy just HAPPENS to show up and be abducted by Artemis. His plan also banks extremely heavily on the fairies not being able to rush the house with their army and instead send in Josh Gad to root out their abducted fairy…which is exactly what happens. Lucky for Artemis, he knows better than the fairies that dwarves like Gad completely abandon their mission and instead go on a side quest to root out the MacGuffin.

But then something truly amazing happens. The abducted fairy and the dwarf sent to rescue her ALSO completely abandon their mission and end up aiding Artemis for absolutely no reason. In the most shocking case of Stockholm Syndrome since Beauty and the Beast, Officer Holly Short, our fairy, not only stops trying to hypnotize her captors and escape at any cost, but she even admits they are the best of friends. She will ultimately use her non-descript magical powers to access the MacGuffin, which everyone says is a terrible weapon that can rip apart space and time, to rescue Artemis’s father.

You kidnapped me, knocked me unconscious, caged me, and threatened to expose my world, but yeah sure I’ll help ya out. Image from Disney.

Questions flood the mind. What happened to the fairy traitor who was undermining Dame Judi Dench’s character? How does the time bubble work when it kills some fairies, but not others? How did the MacGuffin get from the dwarf outside the house to Artemis Fowl inside the house in the next scene? Why did we get an extensive lecture about “fairies can’t be seen or our whole world comes apart” when they routinely wipe minds after flying directly through Italian towns? What are the Fairy Rules that they keep talking about? Why oh why oh WHY did we get narration nearly halfway through the film fully explaining what we’ve just seen?

If I can point to a few positives, it would be Colin Farrell rebounding from his dud role in Disney’s Dumbo remake as well as Ferdia Shaw portraying Artemis. The kid did a pretty solid job, but I wish I he got more screen time and far more development. Also, the visuals are definitely impressive. The “time bubble collapse” was well done and Josh Gad’s CGI work made me sit up and take notice. One last set of kudos to dish out would be to the location scouting team. They found a tremendously wonderful spot of Ireland to do most of the filming.

This movie deserves what it gets from the crowd at Rotten Tomatoes and IMDB. If there was ever a case why movie studios should hire outside people to critique the script and point out holes like these, Artemis Fowl makes it loud and clear. Let’s wrap up by handing out a few awards!

Shut Up Already Award: Josh Gad. Enough with the narration! It’s bad enough we had to see credits on the screen 8:37 into the movie, but this really grinds my gears.

You Skipped “Movie-Making 101” Award: Kenneth Branagh. It is rare that I have seen this amount of “tell, don’t show” on screen, but I’ll give credit where credit is due. Hey movie students! Pay attention to what NOT to do!

The “Willie Scott” Award for Most Useless Character: Juliet…who doesn’t even get a last name. No, really, she’s so unimportant (after some substantial buildup) that the credits don’t give her a last name.

I Have No Idea What I’m Seeing Award: The Time Bubble Collapsing…Thing. So the time disruptor that sat over Artemis’s house collapses and sends out waves, or ripples, or tendrils, of collapsed time that sucks up fairies and kills them instantly…unless it’s Holly Short…or our beloved dwarf? In Holly’s case, she touches several of them but emerges perfectly fine. In a movie crammed with blatantly telling the audience what’s going on, we don’t know the stakes or the consequences of touching these Tentacles of Time or why everyone should evacuate and never return?

At Least It’s a Tax Write-Off Award: Disney. There’s not a doubt in my mind that this movie would have stunk up the box office. Would it have been as big of a loss as A Wrinkle in Time? Probably not as there are some things for kids to enjoy, but I’m sure there are a few Disney executives who are glad they yanked this over to Disney+ to avoid yet ANOTHER live-action humiliation at the box office.

Get MORE news by heading over to our home page and subscribing! Stop missing out!
Mobile users click HERE!