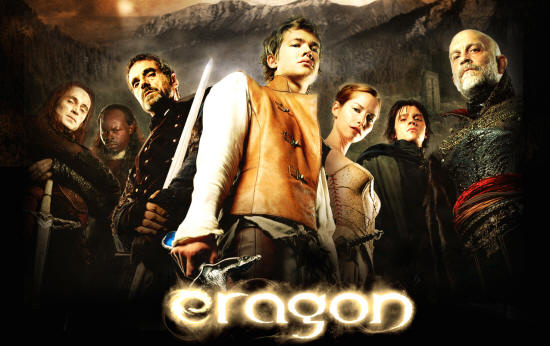 Remakes have become frequent in Hollywood. I know “Remakes are annoying. Can’t Hollywood come up with something new?”  Remakes also give Hollywood the opportunity to revitalize movies that did not live up to expectations.

I want to see Eragon remade.  The movie did not do the book justice as many who have watched it and read the book can tell you.  I am one of those fans.  The adventure, the magic, the struggle, the friendship are all my favorite parts of this fantasy world!

Fantasy Lit has a long history of being transformed on the silver screen. From masterpieces to B-grade movies, Hollywood knows that the fans love fantasy. The universally beloved Lord of the Rings franchise has Rotten Tomatoes score ranging from The Hobbit: Battle of the Five Armies at 59% to The Lord of the Rings: The Two Towers at 95%, just ahead of the 89% score held by small screen icon Game of Thrones.  Even less memorable films hold higher scores like Inkheart at 38% or Twilight at 49%.  Eragon sits at a paltry 16%! Eragon has a large fan base to support a masterful remake.  The book series, The Inheritance Cycle, has sold over 35 million copies and has been released in 40 different languages! A tale beloved by so many fans deserved more than a movie scoring 16%!

The problems with the movie are numerous but I will just start with a few.

First,  Eragon was about adventure and friendship.  I was left wanting more from the adventure.  In the book you saw just the vast adventure he went through.  There were few training scenes between Eragon and Brom and that added relational dynamic and adventure.  It was  presented in the movie Eragon upset by Brom’s untimely death with a lot of emotion but you didn’t see where that emotion came from as they had only been traveling together a short while.   Also in the books, the relationship with Eragon and Arya was far more developed than the movies.  Arya didn’t even know about Eragon before he rescued her and she definitely spent the trip to the Varden more conscious.  Then the biggest relationship of the whole book series, Eragon and Murtaugh, was so badly portrayed.  In the books they had a few months together to bond but in the film they became friends in a handful of seconds.  It is this bond that makes so much of the other books great.

Secondly,  there were missing characters (The Twins, Horst, Jeod, Orik, etc).  SPOILER ALERT FOR BOOK TWO: The twins are the ones that betrayed everyone!  We can’t have a tale of fantasy without a betrayal.  Then, Jeod helped bring more troops to the Varden helping the course of the war not to mention bringing reuniting the cousins, Eragon and Roran.  Not to mention that Orik became a brother figure for Eragon and a rallying force in the Varden, or that Horst was a protector for Eragon and Roran.  Since they’re missing from the movie it would make the story harder due to not having these relationships or story lines to propel the movies forward without needing whole new story lines and odd introductions

Lastly, Character descriptions were not correct.  Arya was had  raven colored hair and green eyes in the book.  Eragon in the book had brown hair and brown eyes. None of the fantasy creatures had their defining characteristics (no pointy eared elves, no horns on the urgals, dwarfs are too tall, no beaks on the ra’zac, etc).  There are many more description inaccuracies but it would take forever to name them all.

Eragon and Arya photo courtesy of photobucket.com *Edited by me*

Now is the time to revitalize the movie series with a remake.  With the release of The Fork, The Witch, and the Worm on December 31, 2018 it brought in a new set of fans to the world of Eragon.  More fans equals more money and if Hollywood wants to bring in the money then now is the perfect time to remake Eragon.

Let’s give fans what they want by remaking Eragon into something fans will love!

The Top Ten Geek Monsters of All time

Hi everybody, it’s October and that’s the season of witches, ghosts and ghouls and everything scary.  In the Halloween spirit, I thought I would...