Heroes In a Half-Shell: Teenage Mutant Ninja Turtles Through The Ages 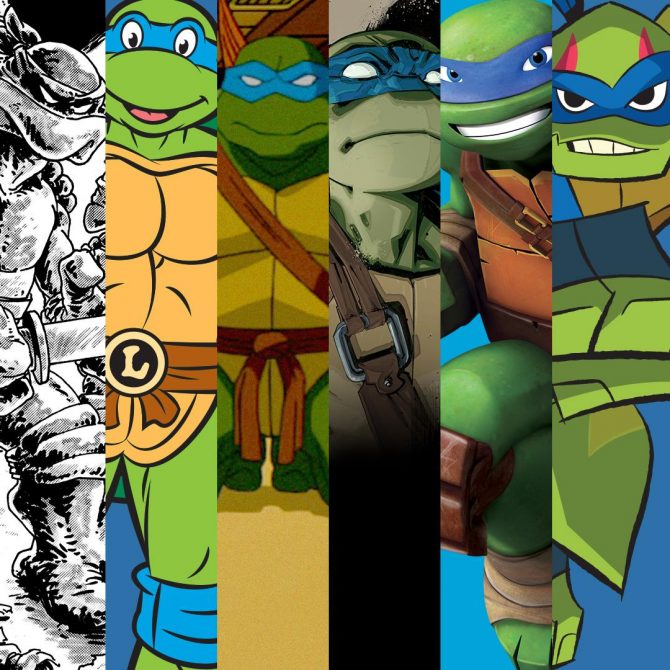 While it started as a comic published by IDW in 1984 , many of us were first introduced to The Teenage Mutant Ninja Turtles (TMNT) through the Saturday morning cartoon series that was launched in 1987. The cartoon series had everything to draw the attention of any kid. You start by having four totally radical heroes in a half-shell who live in a super cool lair in the sewers of New York City, live off of pizza, skateboarded and used the catchphrase “Cowabunga” . Next you find out that they are ninjas who are trained by a rat by the name of Master Splinter who is not only their teacher, but also their father figure. Everyone can agree that those things alone were enough to at least grab the attention on kids in the late 80’s and early 90’s. Throw in villains, who oftentimes resembled some sort of evil alien race, led by super villain Shredder and you have the powerhouse that we all now as TMNT.

The franchised reached its peak of Fame in 1990 when they launched their first installment for the big screen simply titled Teenage Mutant Ninja Turtles.  The cartoon already had a loyal fan base. The movie however brought out turtle mania. In the 90’s you didn’t launch a movie aimed at kids without elaborate toy lines, clothes, home décor, shoes and everything in between.  Since the turtles had 4 characters with very distinct personalities this meant that they were just launching team toys and accessories. Each turtle had their very own line of merchandise. If your favorite was Donatello and your brothers favorite was Michelangelo there were toys specifically created for you to have your own superhero adventures. The popularity on the original movie also brought with it video games for consoles from Konami. The video games were so popular that they released a new game every year up until 1993. They took a small break but started launching new games for the franchise in 2003.

Turtle power never left us and it is stronger than ever in. They have launched new cartoon lines through Nickelodeon. In 2014 there was a new movie released to bring Michelangelo, Donatello, Raphael and Leonardo to generations to come. Teenage Mutant Ninja Turtles are standing the test of time showing that the fans are still there and as loyal as ever.

In the mid-Maine town of Bangor, known for author Stephen King and its giant statue of Paul Bunyan, two men and their team work...

Kazuhisa Hashimoto, the creator of the iconic Konami code, has died. News of Hashimoto’s death was announced on social media on Wednesday by Yuji Takenouchi, a...