Stormtrooper Bloodied by Police on May the 4th 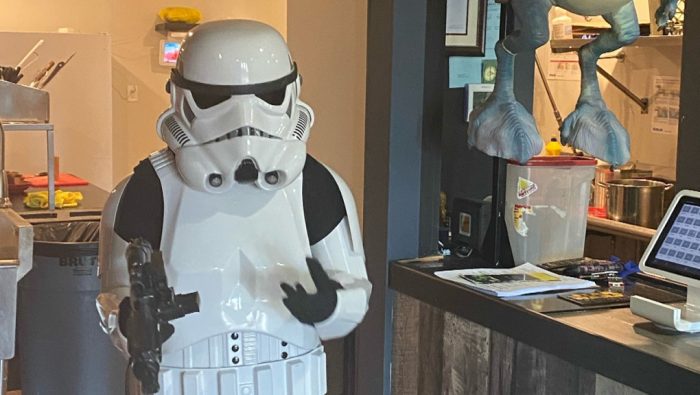 CALGARY — An employee at a Star Wars-themed restaurant  had a memorable May the Fourth, after her costumed celebration and replica weapon drew the attention of police and ended with her nose bloodied.

While dressed as a stormtrooper, the worker went into the parking lot of the Coco Vanilla Galactic Cantina in Lethbridge at the direction of her manager. She danced with blaster in hand on May the Fourth — the day fans celebrate the film franchise as a play on the iconic “May the force be with you” line.

Lethbridge Police Service arrived with guns drawn and the stormtrooper dropped the plastic toy to the ground.

“Apparently a couple of people had called 911 and said that there was somebody with a gun on 13 Street North,” said Brad Whalen, the restaurant’s owner.  “A number of police officers had shown up to our business with guns drawn on our employee.”

Whalen says Ashley suffered a bloody nose after she was tackled to the ground by officers and handcuffed. However, there are conflicting reports as to whether the trooper dropped the weapon or not.

“The officers approached the person and provided verbal directions to that person to drop the weapon, to put themselves on to the ground,” said Insp. Jason Walper of the LPS. “The person did not comply with police verbal directions. ”

The Star Wars franchise has been impacting generations of people across the globe for nearly half a century. It’s mind-boggling that people would either not recognize a stormtrooper with a blaster or be so ignorant that they thought the weapon was real. It’s a trooper, in armor, with the helmet, at a Star Wars-themed restaurant. It doesn’t get more obvious than that. When did society get to this level of paranoia? If a ban on bladed weapons is put into place, will the Jedi and Sith, in full costume, be next?

As of Monday afternoon, the worker was not facing any charges in connection to the incident but police say the investigation into the matter is ongoing.

Common sense belongs to a time long, long ago in a galaxy far, far away.