Thoughts on the darksaber 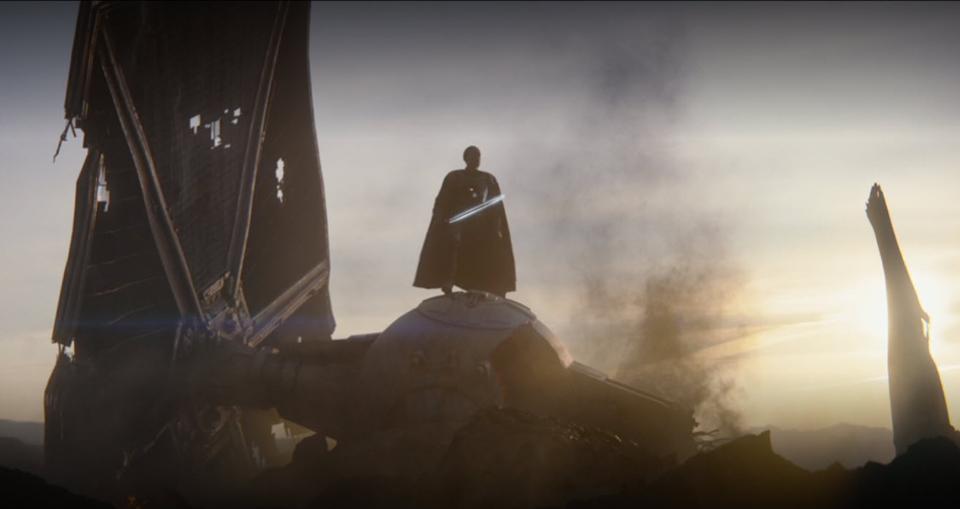 The last few minutes of the Mandalorian ended with a bang— literally. The lone wolf protagonist crashed a TIE fighter without the force or a lightsaber, crashing the Imperial ship harder than the Dow Jones Index.

Assuming his foe is dead, Mando leaves the crash site before he goes to return baby Yoda back to his own kind. With his metal helmet turned away, he doesn’t see what crawls out the last few minutes of the episode…Moff Gideon, holding the legendary Darksaber.

What is the big deal? It’s just another lightsaber right?

The Darksaber was the lightsaber of the first and only Mandalorian that became a Jedi. It was kept in the Jedi Temple for years before his descendents broke in and stole it. The saber was a symbol of the Mandalorian culture, a way to bring all clans of Mandalorians together. It united Death Watch, a branch of Mandalorians that lived during The Clone Wars.

The Clone Wars hasn’t revealed how the Darksaber fell into Moff Gideon’s hands yet. Hopefully, with the final season coming out on Disney Plus, the audience might find out why, but with the huge time gap between the Clone Wars and the Mandalorian, the true origin will probably appear in the second season of the Mandalorian when Moff Gideon gives his villainous monologue.

I’m going to go out on a limb here—I don’t think Mando himself will know the full history of the saber. He didn’t even know of the Jedi—or the Force, until baby Yoda choked one of his allies during an arm wrestle. He may know what the sword meant to the scarce Mandalorian culture, but maybe not why.

Part of the Mandalorian culture to earn the Darksaber is to defeat the current owner in combat. I doubt Moff Gideon will follow these rules, though. I’ve seen this cliche hundreds of times–villain has a powerful weapon and so the hero must find strength in themselves to defeat said villain or take said weapon. We’ve seen it during Thor: Ragnarok, where Thor unlocked his true power because his own weapon was destroyed.

The Mandalorian steps away from the classic heroes of the Star Wars universe—after the fall of the Empire, but before the rise of the First and Final Order. It gives the audience a break from the constant saber fights, lighting blasts and crazy family drama. The main hero doesn’t show his face until the last episode of the season, displaying his attitudes through head movements and shoulder shrugs, and hasn’t hinted that he has any Force connection at all.

Mando shows the other side of the war that the episode main saga of movies, movies didn’t focus on, not including the movies Rogue One, and Solo that tie up loose ends in the series.

I’ve enjoyed seeing the other side of the fight, with the main hero not having the Force at all. I’m not totally against bringing the Force in, simply because it’s such a powerful force in the Star Wars saga, but to see a fight with such a wonderful hero without the Force at his fingertips really makes me excited. There is more to the Star Wars saga than the Jedi and Sith, and although the Force is awesome, sometimes I want to ride a different bantha.

Sometimes, a girl doesn’t want another saber-swinging hero, or a prince riding a valiant steed. Sometimes she wants to see someone fly off into the sunset with a flaming jetpack.

True, every story has been told. I’m not surprised to see that cliche again, but I’ve noticed that with all the Disney remakes, the same stories are being told over and over again. It’s disappointing, but hopefully, with some new twists and turns, the fight will be as exciting as it will be pumped up to be. I’m ready for Mando to fight for the sacred saber and get it back in Mandalorian hands.

Perhaps it already was in Mandalorian hands.

If this is the case–Moff Gideon has the blade because he was once a Mandalorian. Mando stressed throughout the season that once he took the mask off, once he left the Mandalorians, he wouldn’t be allowed to return. Is it possible that Moff Gideon took off his own helmet and wasn’t permitted to return to his people? The Empire is known to be a bit “persuasive”…

Even if you do cancel your Disney Plus subscription because you don’t see baby Yoda “doing the Magic Hand thing” every Friday, know that Moff Gideon has a Mandalorian lightsaber.

If Mando doesn’t fight for it, why else would it be there?