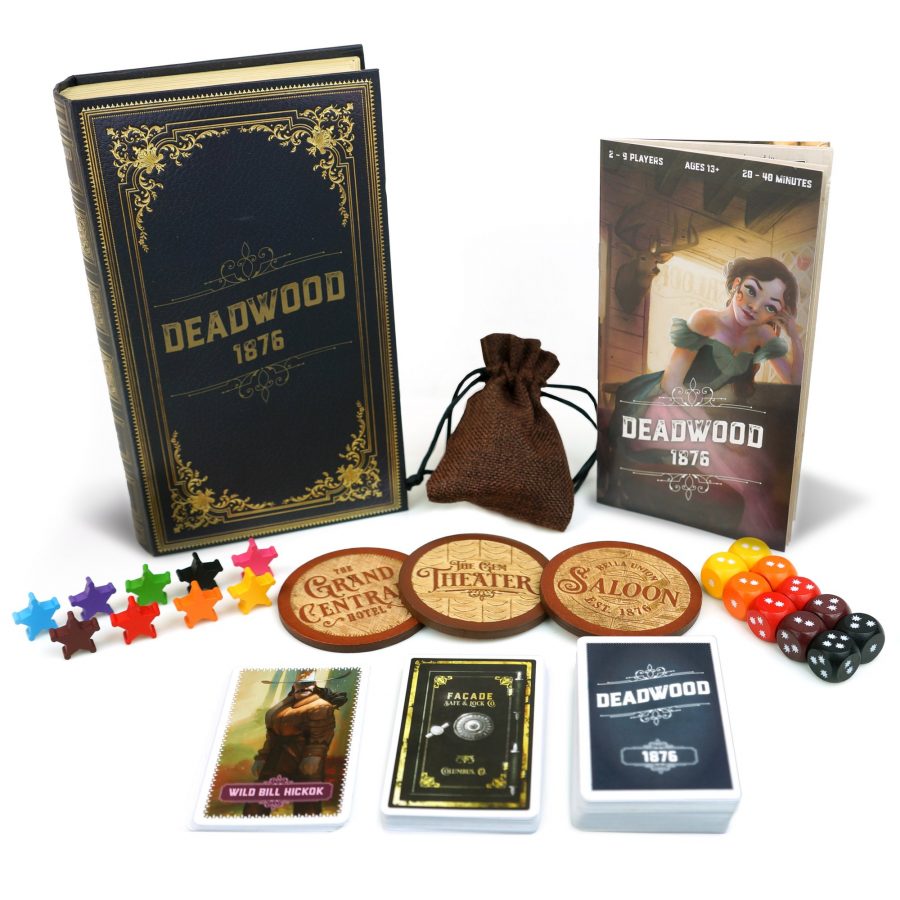 Step Back In Time

With the fast pace of modern life sometimes you need something to take you back in time to a simpler time. A time when every saloon had sarsaparilla, every boom town had tumble weeds and you had to be handy with the steel in order to earn your keep. Enter the world of Deadwood 1876 as brought to you by Façade Games. Deadwood 1876 is the third game installment in the Dark Cities Series. The first two games Salem 1692 and Tortuga 1667 started the historical trip through the histories dark times.  We will talk about those games more in depth in another review today I will walk you through the old west town of Deadwood.

Deadwood 1876 is set in the wild wild west during a time when the western territories were still being carved out of this great nation. There were ranchers, lawmen, cattle rustlers and saloon girls. None of those were quite as brazen as bank robbers. You the player have managed to wander into the town of Deadwood which is nestled in the Black Hills of South Dakota. You’ve been told that this town just might be full of gold and you are looking to score with one big heist. Deadwood 1876 can be played with anywhere from 2-9 players and while each character has their own motives players may find themselves teamed up for the final show down. Since you know that there’s gold in them there hills your goal is to use the cards in your hand to win safes from other players. The safes contain badges, gold and weapons that can be used in the final showdown. While you all may be in cahoots to pull off the greatest heist ever, in the end it’s every player for themselves. Each player can pick their character from a set of character cards. The game includes well known historical characters such as Calamity Jane and Wild Bill Hickok as well as original characters with names such as Kitty Leroy and Reverend Smith. Once the players select their character, they will be given a wooden meeple that correlates to the characters name placard.  Game play consist of a combination of dice rolls and card in your hand. I don’t want to talk too much about the games mechanics because of course those are best understood once you have your own copy of the game to play.

One of the best parts about this game is its easy storage and ability to take the game anywhere. This is a game that, as mentioned, can play up to 9 players it takes up the same amount of space as a standard paperback book. This means it is easy to store on a book shelf with your books or in small spaces next to your other board-games. Since the game box itself is small it also makes this game very portable. It’s easy to toss the game in a back pack or purse to take to a friend house or your local game shop. The box’s magnetic closure will keep all the parts in place. Since space if at a premium for many of us this also means that the space you need to play this game is minimal. I have played up to 6 players on a surface as small as a TV tray.

The best part of Deadwood 1876 is that the game play is exciting and it’s quick to play. The game doesn’t drone on for hours and even when you play a long game the time flies by. I have personally done demos of this game at local events where I have played this game for 4-6 hours. The game play never got old. If you are looking for a game that will keep people entertained for years to come I don’t think you can really go wrong with Deadwood 1876 or any of the Dark Cities Series games. Even when the game is not in play it makes for an interesting conversation piece. If you are looking to expand your game library with a game that is fun for teens and adults this should be one of your top picks.

Variety announced today that the PlayStation’s Twisted Metal is set to become the newest comedy on Peacock.  Twisted metal was a global phenomenon for...